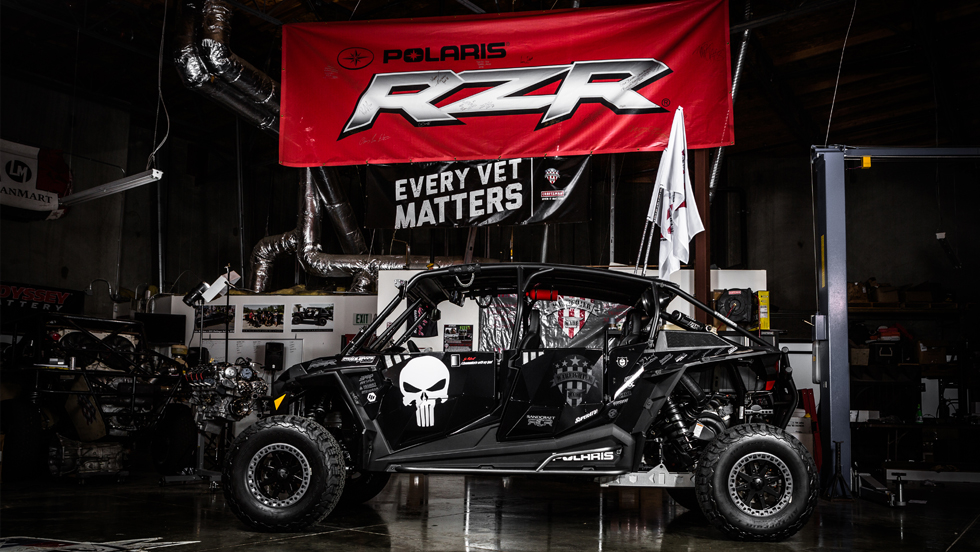 In the Veteran Community, vets are always looking out for one another, which was the case when retired Navy SEAL, Tim K. told us about his fellow SEAL brother, Elliot Miller. Elliot had purchased a 2017 XP 4 Turbo, that he had sitting on a small single axle trailer in his front yard. Tim was concerned that someone could easily steal the RZR and trailer, plus, when going out to the desert, Elliot didn’t really have a place he could go to get out of the sun. Tim thought if Elliot had an enclosed trailer, it would keep his RZR free from prying eyes, and give Elliot a place to relax when not shredding. What makes this situation unique, is the fact that Elliot, while serving in Iraq, was hit by an I.E.D. that caused him the loss of his left leg above the knee, and a brain injury so severe, it took away Elliot’s ability to verbally communicate.

We sprang into action looking at different trailers we felt would accommodate Elliot’s injury, but also provide other needed comforts. We called up Becker Custom Trailer in Las Vegas, and they jumped at the opportunity to work with Warfighter Made (WFM) and support this American Hero. We loaded out one of their 16’x8′ dual ramp aluminum trailers with insulation, l.e.d. lights, flooring, and other subtle additions, but the main add on was the air conditioning unit that will keep the trailer nice and cool for Elliot. 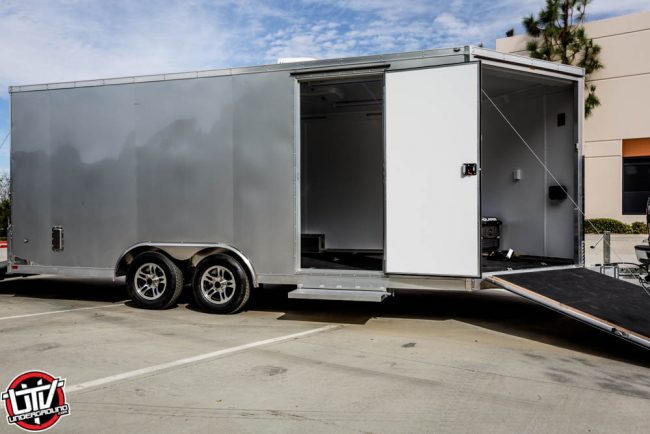 Prior to us ordering the trailer though, we meet with Elliot to determine exactly what he needed in a trailer. While we were talking with him, we asked if there was anything he needed for his RZR, to which his face lit up and he typed out on his iPad, “A STEREO!!!” Our response: No problem!

Our friends at Kicker and SSV Works are on speed dial and they set us up with their Kicker Edition, 5 speaker system with a 10″ subwoofer and 800 watts of power. This is a true plug and play system and has SSV Works amazing glove box sub enclosure. Now that we had Elliots vehicle in our shop to install the stereo, we decided to take it upon ourselves to add/update a number of items on Elliot’s RZR, to ensure the machine was as bad ass as it’s owner. 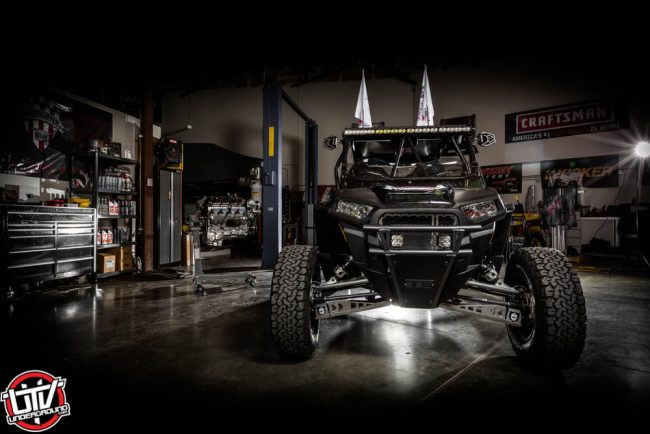 The RZR already had a kick ass Pro Armor cage and their Stealth doors, so we added PRP Seats with the Punisher logo (I mean, a random skull we found on the internet) embroidered on them. MSA supplied us with their 15″ M31 LOK2s, that we subdued the chrome center star on, then wrapped them in BFG T/A KO2s. Gibson gave us one of their single out replacement mufflers, which is quickly becoming one of our favorite exhausts for its ease of installation and mellow tone when cruising. UTV Wiring sent out their awesome dual battery system and since we have a partnership with Odyssey, we already had the required batteries on hand. This system is pretty rad and ensures you always have a battery in reserve, so you don’t get stranded on the trail. Baja Designs donated a 30″ light bar that we added to the roof and pods we put in the Dirt Engineered front bumper. Dirt Engineered also gave us a set of nerf bars that were color matched perfectly with the rest of the car. Assault Industries supplied us with tie and radius rods, mirrors, a grill, and their quick release fire extinguisher to keep every thing safe. 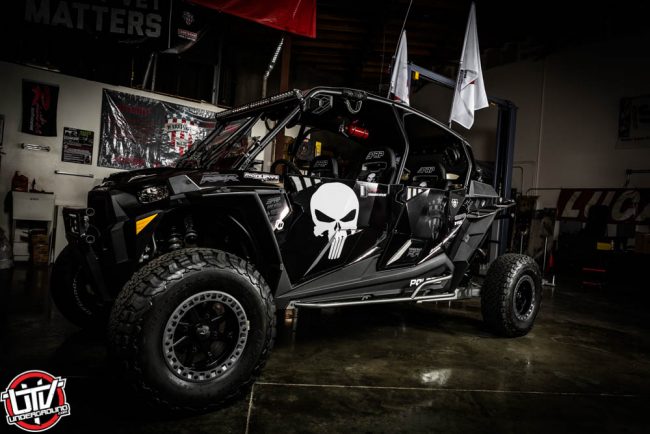 Next our friends over at Off Road Extreme wanted to know if they could use Elliot’s machine to test the Dynojet Power Vision CX tuner, specifically made for the RZR Turbo. As anyone will tell you, adding more power is never a bad thing, so we took them up on the offer, which included free dyno tuning, and Elliot got to keep the unit when done. We were rewarded with 9 extra horse power and all we had to do was plug the tuner into the OBD port. Simple! With that extra power, we called Super ATV and told them what we were doing and who it was for, and they sent out their Rhino 2.0 axles for added strength. We also reached out to Sandcraft RCR to inquire about their kick ass carrier bearing, and they ended up donating their entire “Complete Drive Train Solutions” package, that included the Gen 3 carrier bearing, but it also had their up graded prop shafts and engine mounts. All this adds up to Elliot’s RZR being one of the tightest machines we’ve ever driven, with silky smooth on/off throttle transitions, especially from a stop, or at really low speeds! 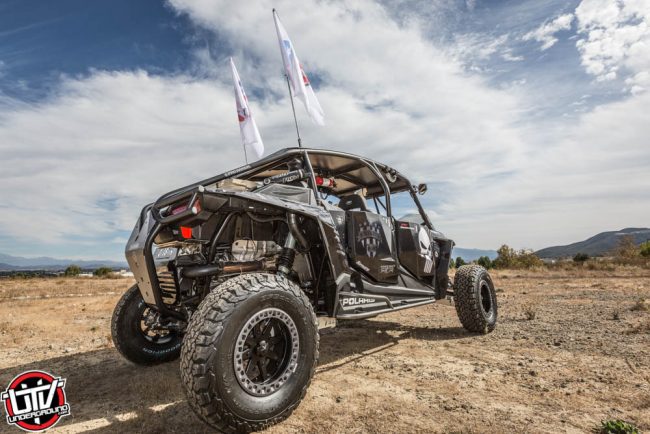 We only had one major thing left to do, and that was wrapping it. We knew we wanted to go with a blacked out Punisher theme to pay homage to Elliot’s roots as a SEAL, but we also wanted to include something on the wrap, that would let people know that Elliot doesn’t speak. We called up our family at Proline Wraps and we’re going over some ideas about what to put on the machine to make others aware of Elliot’s injury, when the owner of Proline, Andrew, said “Be Patient, I Communicate with an iPad”. It was perfect and we hope it makes it easier for Elliot to talk with people. Proline Wraps sent the wrap to our door and the vets installed it at the WFM facility. (By the way, if you’ve ever scoffed at the amount of money professional wrap installers charge, believe me, it’s worth EVERY PENNY! lol) Lastly, we did an oil change with Lucas Oil, added the Whip Tech L.E.D. whips, with WFM flags they specially made for us, and Marine vet Will B. donated a custom painted Punisher Bobble Head he had, and stuck it to the dash, which pretty much meant the build was finished! 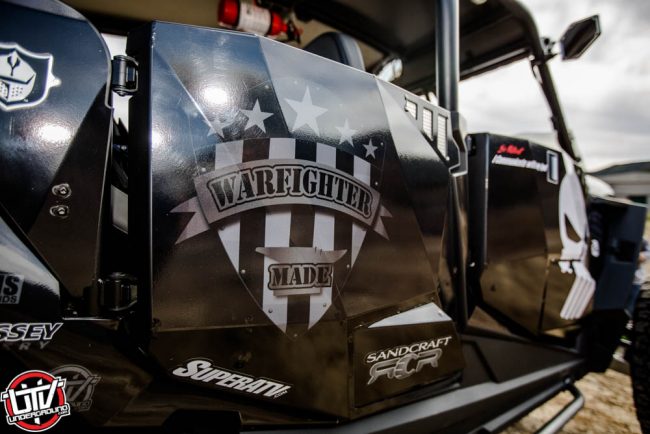 Now it’s PARTY TIME. We set the reveal date, had it catered, invited a bunch of people and waited for Elliot to arrive! Then we waited and waited and waited some more hahaha. Due to Elliot’s brain injury, he’s not really on the same schedule as most people and he accidentally slept through his multiple alarms. It was okay though, with his young sons and in-laws in attendance, Elliot and all of us at the reveal party jumped on Facebook Live and we revealed his RZR, and Trailer to him via social media! Elliot showed up a few hours later, and we got to give him the tour in person.

All in all it was an awesome event, that all started with one vet, looking out for another. 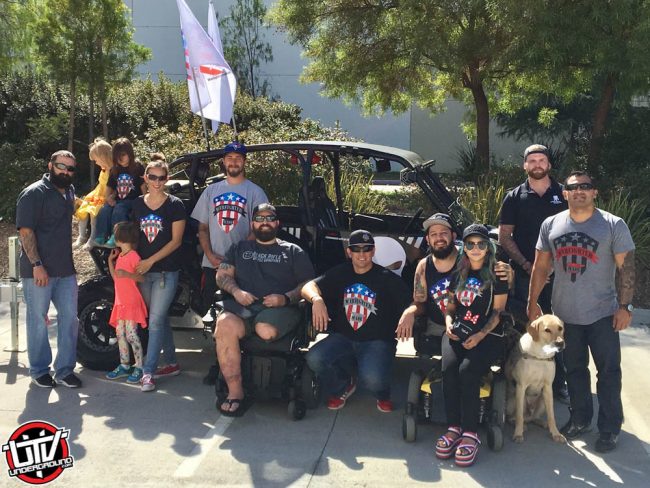