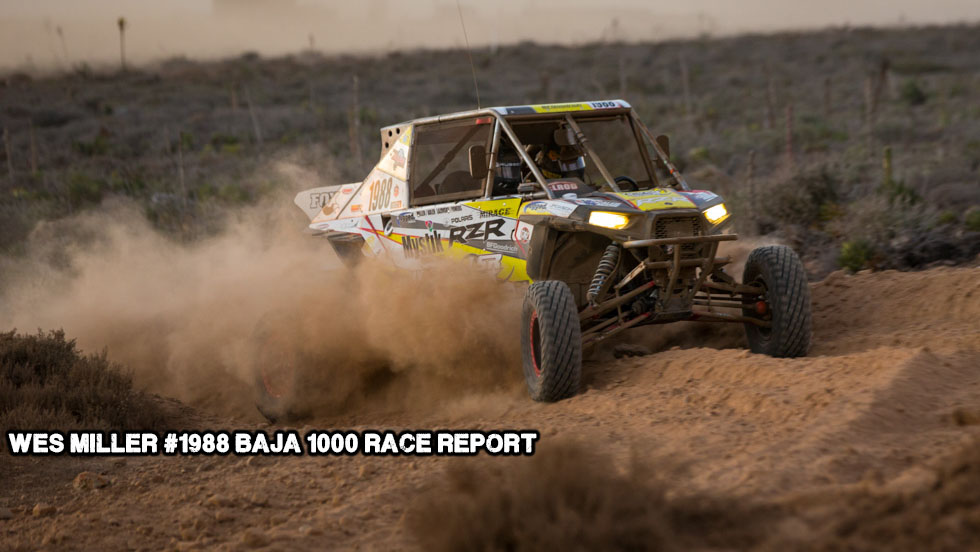 This year’s SCORE Baja 1000 was a loop race, starting and finishing in Ensenada, Mexico. The course did a large counter clockwise circle around the upper third of the Baja peninsula and was being slated as a tough one.

Throughout the year, I have been racing the Rotation Motorsports’ Polaris RZR XP 4 1000 built by Lonestar Racing. I’ve been sharing driving duties with Dave Lazovsky and this race would be no different. We’ve had a great group of sponsors backing the program all year and were extremely impressed with everyone’s products, but decided to make a few changes for the 1000. Wes Elrod and Donny Powers prepped the car and did an amazing job. We went with BFG tires with Monster Seal on OMF wheels. Rich Morel built our motor and we dyno tuned it at Alba Racing. We also chose RCV axles and CV’s. While testing the car, it was working really well and I knew we had a car capable of winning the race.

After some extensive pre-running, we registered and tech’d the car. I drew 4th off the line, so we had a good start position. With 24 entries, the field was a who’s who of UTV desert racing. Several teams had new turbo cars, but I felt like they wouldn’t be a huge advantage since much of the course was slow and technical. This race would mark 20 years since my first Baja 1000 and I planned to use my experience to my advantage. My goal was to put the car in first physically by Ojos Negros, get a lead, and then maintain that cushion. But I also knew it’s a long race and you have to take care of the car.

At the start line my co-driver, Austin Adler and I watched the first few cars take off. Once we got the green flag, we were off and racing. I raced down the wash out of town, focused on reeling in the 3 cars ahead of me. Around race mile 6, I already caught the 1958 car that was following a Baja Challenge car. I quickly passed both and could see the tail lights of the next UTV. We came up on a 37mph speed zone in the dirt. To my surprise, the car ahead of me didn’t slow and maintained race speed. He pulled away a little, but I knew that it would equate to a huge time penalty. When we reached the first highway section, I saw the 1939 car pulled over to the side of the road placing us 2nd physically. After losing my mind going 37mph in the highway speed zone, we finally hit dirt and were back to race speed. I caught and passed a few more Baja Challenge cars. Then, I saw the tail lights of the lead UTV and after about 5 miles of dirt, we had caught the 1927 car. He was caught behind the 700 truck. I was already in the time adjusted lead since he had started a minute ahead of me. They both took a bad line and I made the pass for the physical lead. Once out front, I focused on putting as many cars between me and the UTV field while driving easy on the RZR. We worked our way through a seemingly endless string of racers and the dust was really bad in spots, making it difficult to see. 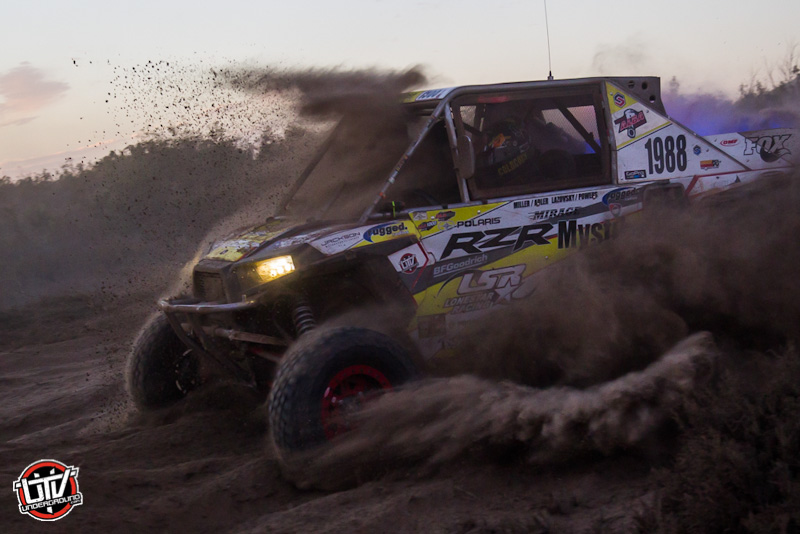 About halfway to Urapan, I noticed we were starting to have a mechanical issue that slowed us through the rough sections. The 1927 car did a good job of sticking around and I could see him close a few times when we were slowed. When we hit Highway 1, I had a slight lead over 1927. The road was blocked with traffic and it allowed him to close right on my bumper. We raced through the speed zone trying to go as close to 60mph as possible all the way to Santo Tomas. He pitted there and that gave me some breathing room.

From Santo Tomas to the coast is fairly smooth and I know that area like the back of my hand. I figured we could start to gap the field now. I pushed on the fast roads because I knew we were going to have to make an extended pit stop to fix the car fairly soon. Once on the coast, we hit some pockets of fog. It was so thick I could hardly see the course and my shield was covered with condensation. I drove with one hand on the wheel and the other wiping with a towel. We were pulling away and had a good lead.

As the course ran south along the coast, it started to get rough again. I had to dial it back a notch to preserve the car. The parts we needed were at BFG pit 2 and I needed to get the car there in one piece. After a while, I was able to see another car slowly closing. We stopped to pit in Camalu and took a can of fuel and installed the race lights. We run Baja Designs lights on a quick release bar, so we only run them when needed. While in the pits, the 1921 car went by. I pulled out and took chase soon after. He had about a 15-30 second gap and we maintained that distance most of the way to San Quintin. Just before BFG pit 2, the 1921 car pulled off to pit. We passed him and were now back in the lead. But soon after, we pit at race mile 203. We had several mechanical issues we had to address and were in the pit for about 30 minutes. In that time, several UTV’s passed. 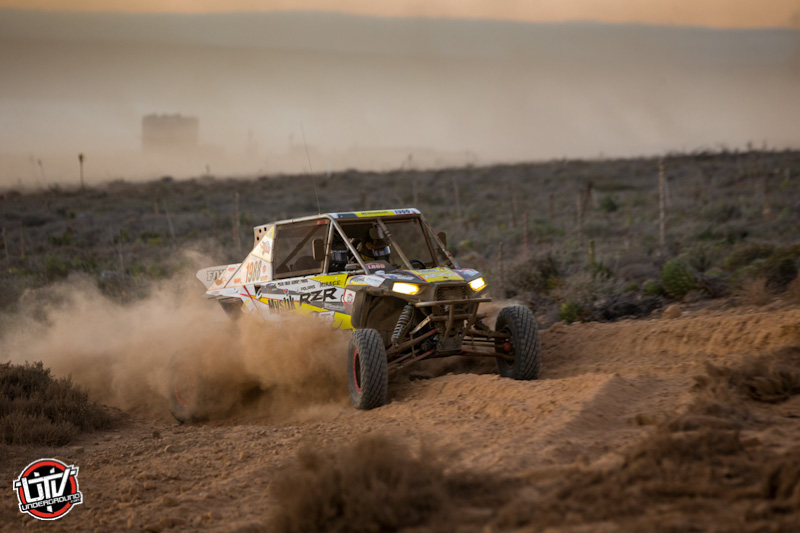 We were still running well, but I was going to have to go into survival mode to try and get the car to the finish. We worked our way down the coast to El Rosario and headed east. The wash that runs parallel to town was full of silt and hard to follow the course. We hit a big mud hole that engulfed the RZR in mud. Soaking wet and cold, we headed into the mountains. We made it through the rocks and silt back to Highway 1 at race mile 283. Mechanical problems were starting to take their toll. We had more spare parts at BFG pit 3, so we continued to work our way there.

From race mile 288 to around 340, was some rough, rocky, and silty terrain. There were cars scattered everywhere. There was carnage all over the course with cars and trucks stuck in silt, broke down, flipped over, driven off cliffs, etc… We were just trying to make it to BFG pit 3 at this point and it was looking doubtful. We finally made to the pit and the car was in need of some serious work.

After an extended pit stop, we got going again only to make it a few miles and break. We limped it back on a side trail and fixed it again. The next time we made it about 25 miles and broke again. I found a trail on our gps and circled back to our pit. We assessed the car and finally made the decision to load up and head back to Ensenada. We were out of parts and the car was in rough shape. We had parted out our recovery RZR and were looking at over 100 miles of tough course ahead of us. With limited access, there would be no way of getting the car if it broke. All of that led to our decision to call it. 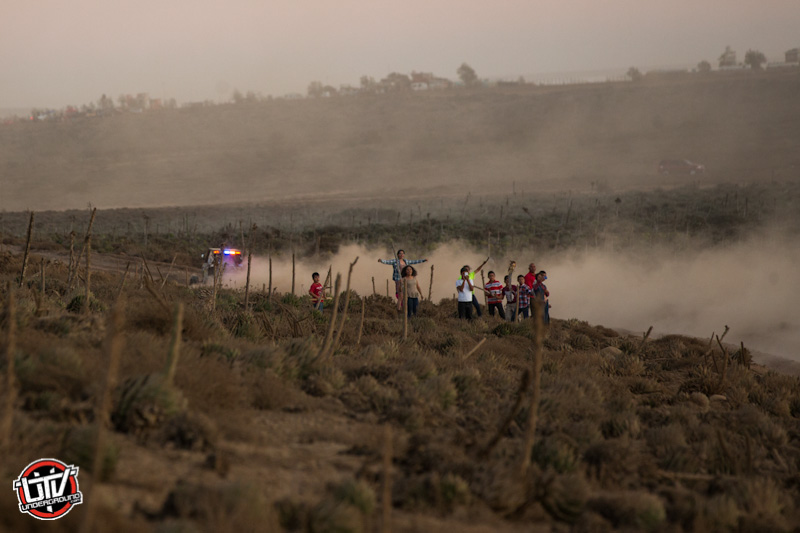 We had a good run going and I feel that it reflects flashes of what we can do. If the car had held together, I don’t think anyone was going to catch us. But that is part of desert racing and I don’t like excuses. I can’t say enough good things about the motor, suspension, tires, wheels, lights, etc… The RZR was simply bad ass. Congratulations to Matlock for winning and all of the teams that finished.

I really want to thank all of our crew and sponsors. You guys are amazing and I truly value everything you do. The RZR was the best it has ever been. Wes and Donny did a great job and put in countless hours of hard work to make this race possible. Thank you to Dave Lazovsky for being an awesome teammate and driver, and Austin Adler for co-driving with me. And a big thanks to BC Vaught and Rotation Motorsports for helping put this whole thing together.
We will win one of these soon!

Thank you to all of these companies that helped throughout the year.