Home All Stories News Winning The SF250 with High Point 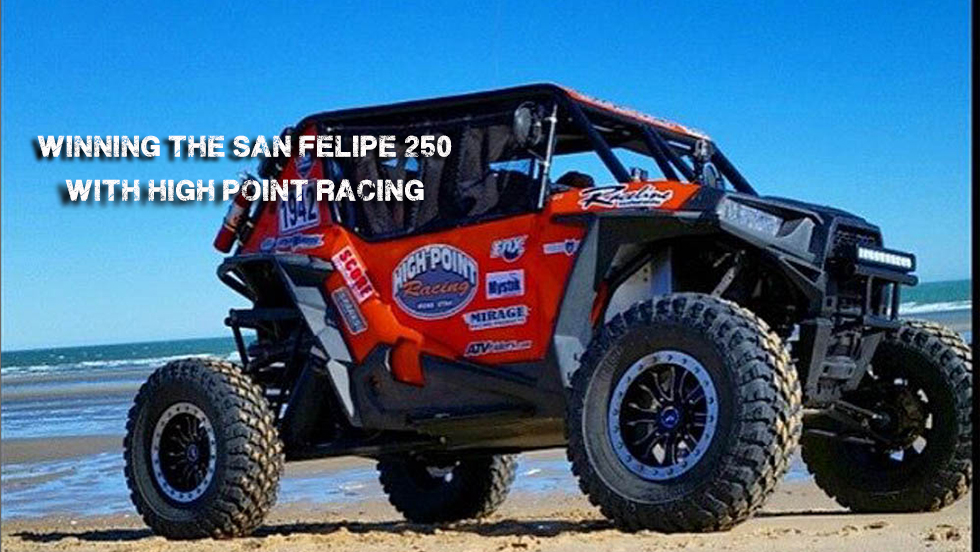 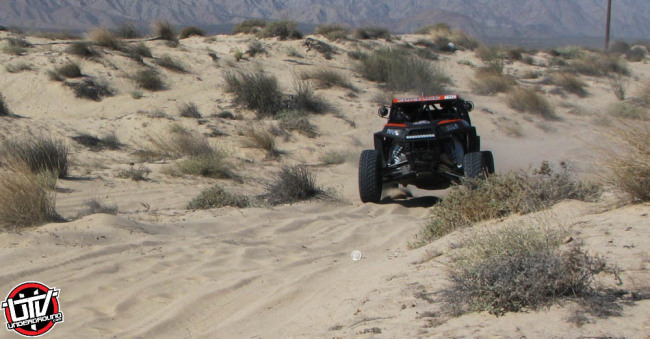 High Point Off-Road Racing came away with a win at the 2015 SCORE San Felipe 250. The San Felipe course is known for being brutal, and this year was no exception.  A couple days before the race, co-driver Nick Oldham and I spent a day pre-running the course in a stock Polaris RZR. After pre-running, we determined that half of the course consisted of big whoops. We were going to need to roll some of them at 20 mph to keep the RZR in one piece. We reminded ourselves that with our own custom suspension arms and FOX shocks, the 1942 Race RZR handles whoops remarkably well. We wiped away our crybaby tears and set out to find some Advil. 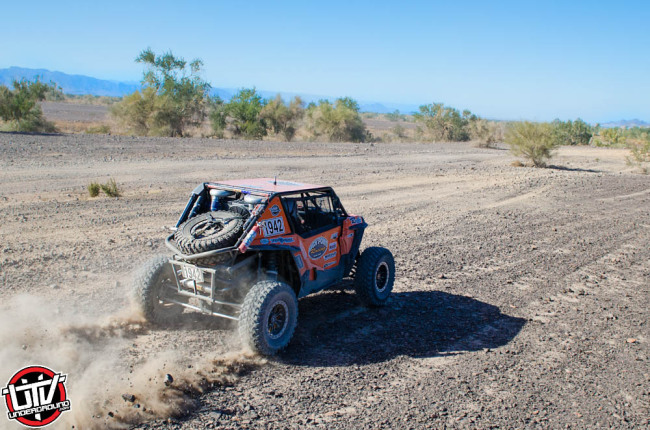 Morning of race day came. We buckled into our seats and lined up next to a field of very competitive racers. Our draw position was 4th. Right out of the gate, we charged ahead and caught 3rd and 2nd place, battling it out at race mile 5. Right as we went to pass, our lane turned into monster whoops while the other lane was mellow. I hammered down, got on top of the whoops, and made the passes. Right then I knew our faith in our suspension components was well-founded.  We drove hard aiming to catch UTV Inc.  We knew it was the only RZR in front of us. The terrain changed from whoops to a rocky field and a rocky wash at race mile 45. Carrying a lot of speed through the rocks meant depending on our Pit Bull Growlers, Raceline Wheels, and Wicked Bilt Rackzilla to hold up to the abuse of hitting the rocks. In this wash, I damaged our drive belt. Nick hopped out and changed the belt, but this delay cost us two positions. With the belt changed and Nick back in the car, we headed to the first pit. 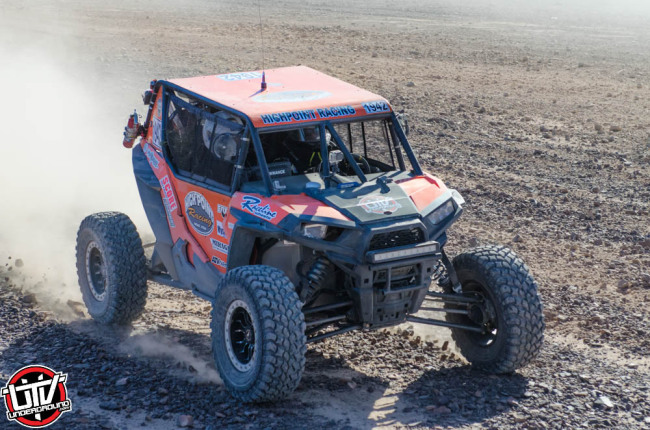 The pit crew did a lightning-fast pit stop, checked the car, and got us on the course before any other racers came by. Entering the flat lake bed north of San Felipe, our Sparks Racing Motor and Pit Bull Tires pulled us over 70mph in the soft dirt. At that speed, I hit a big rock. It took 5 miles for the small crack in our wheel to let the tire go flat. When it did, we found ourselves in a silt bed and had to drive another 2 miles before we could change the tire (The Pit Bull growler is still fine, and the Raceline wheel is very repairable…can you say tough?)   We had finally caught UTV Inc. at race mile 126.  We traded positions with them twice before we had our second pit stop. Joe Owen, the crew chief, headed the pit crew. They splashed fuel and gave us a new spare tire in under one minute. 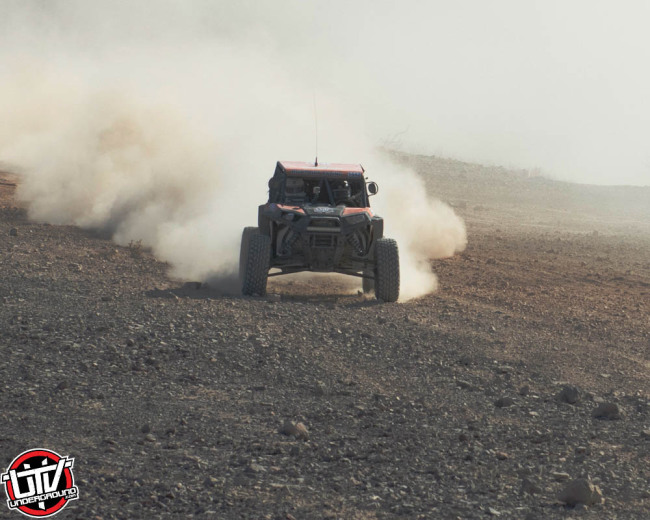 Nearing race mile 155, we had to repair another belt, as it had gotten pretty hot pulling the flat tire through the silt. While stopped, we watched as the always-fast Jagged X team passed by. Nick got back in the car, and we charged to catch Jagged X and the elusive UTV Inc. We found Jagged X stopped in a wash with problems as the sun was fading behind the mountains. We turned on our super bright Wicked Bilt 17” compact light bar and pushed through the biggest whoops of the course. Once again, I found our FOX internal bypass shocks allowed us to go much faster and smoother than I thought we could. This stretch of endless pounding was the ultimate test of a RZR’s components. Through it all, our RZR charged ahead. At race mile 210, we were able to pass UTV Inc. 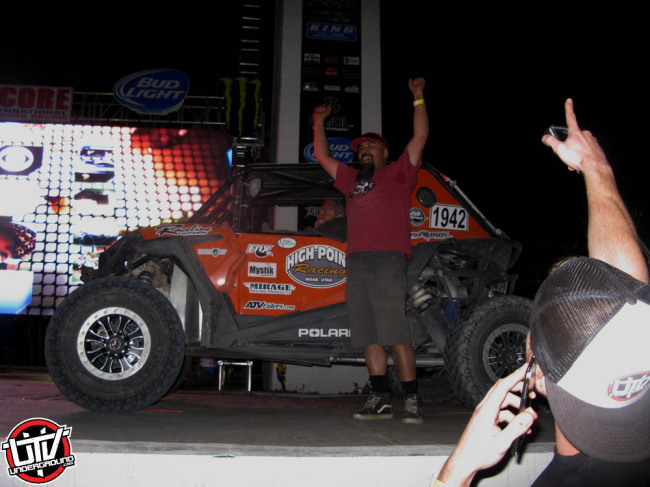 The last 40 miles of the course had more nasty rocks and big whoops, but we knew that we had to keep our pace as fast as we could. As San Felipe came into view, the motor with Mystik Lubricants oil still sounded fresh. We pushed the RZR hard as we came to the finish line, where our friends and family were cheering the first place finish. 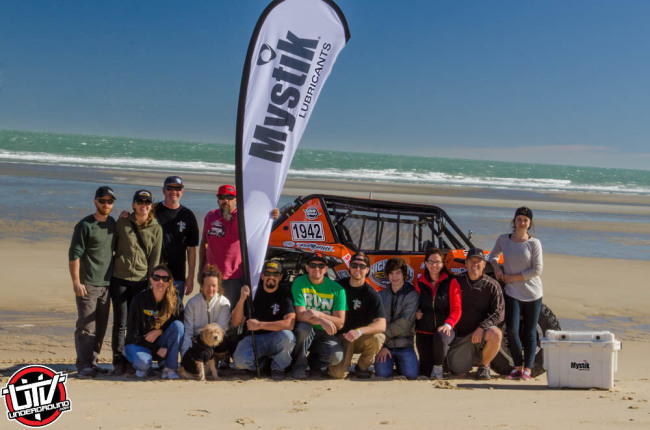 We owe a huge thanks to our sponsors.