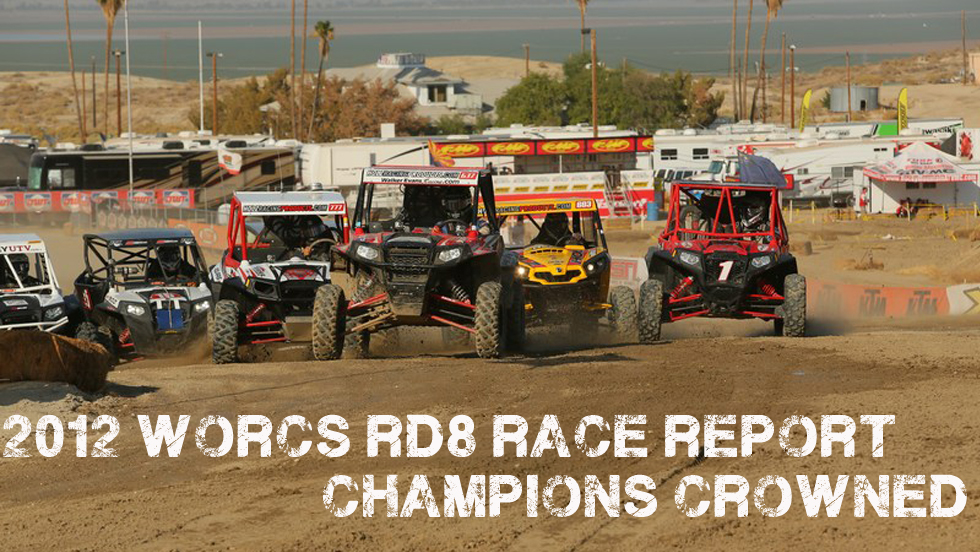 Taft, CA – The 2012 WORCS SxS Racing Series finale was held at Honolulu Hills in Taft, California this past weekend, and the championship was still up in the air for several of the SxS / UTV classes, but the tightest points battle was in the SxS Production 1000 Class with both Ryan Piplic and RJ Anderson tied for the points lead heading the final round with Beau Baron just a few points behind the duo, which made for an incredibly exciting season finale.The SxS Production class was broken up into three rows with the points leader taking off on the lead row, and it was Walker Evan Racing’s #637 RJ Anderson grabbing the Holeshot followed by Sparks Racing’s #549 Beau Baron and Fox Racing’s #15 Ryan Piplic.

With the top three 1000 SxS racers out front with RJ Anderson leading the charge, the race was temporarily stopped after the first lap with the racers lined up in the current racing order due to a flipped over SxS in the Canyon, which was blocking the course and causing a bottleneck.

Once, the course was clear, the racing action resumed with RJ Anderson once again pulling away from the pack with Beau Baron and Ryan Piplic in chase, but in the final lap, chaos broke out nearly simultaneously on the track with both RJ Anderson and Beau Baron suffering mechanical issues within only a few yards of one another. Anderson suffered a transmission issue, so he could only drive in reverse, so he spun his RZR XP around and drove in reverse for the final lap, which didn’t earn him any extra points, but he just wanted to finish what he started. RJ Anderson crossed the finish line with a crowd of spectators cheering him on to the finish, and Anderson finished out the year in the second spot.

Beau Baron temporarily took over the race lead, but he his rear wheel studs broke off, which left him with a missing wheel, and just like Anderson, Baron wasn’t about to give up without a fight, so he pressed on dragging his rear hub around the track, but he wasn’t able to continue since he couldn’t climb the hills and Ryan Piplic made the pass to take over the lead.

Ryan Piplic rode smooth and smart in the final lap because with his toughest rivals virtually out of the race all he needed to do was finish ahead of them to take the SxS Production 1000 Class Championship. Piplic held the lead to the checkered flag to secure his second win of the year and the championship with his near stock Polaris RZR XP 900, and his only modifications behind the standard safety updates was the addition of FOX shocks.

Can-Am Josh Frederick secured a season best finish in the second spot in the Can-Am Commander 1000 SxS with Frederick gaining two spots in the final lap as he edged out Greg Row finishing in third. Frederick is looking to racing the all-new Can-Am Maverick 1000R SxS next year, which was announced this weekend at the Sand Sports Show in California. Frederick had a chance to already drive the new Maverick, and he was really impressed with it.

In the SxS Production 850 Class, #2 David Lytle claimed his third win of the season, and he was the only SxS racer to finish in the top three at every round this year as he claimed the class championship with a 23 points lead over Alfredo Ramirez in the second spot, and Kyle Melville rounded out the top three in series points.

In the SxS Production 700 Class there was another three way battle for the championship between #816 Cody Rahders, #12 Luke Rogers, and #3 Kayla Smith with less than 20 points separating all three heading into the final round with Rahders with the points lead.   Rahders came off the line with the holeshot in his Polaris RZR 570 while #3 Kayle Smith was nearly spun out behind him, but Rahders lead would be short lived as he dropped back to third spot by the checkered flag, which was more than enough to Radhers to secure the class championship ahead of Luke Rogers by just five points.

#3 Kayla Smith was on a mission as she charged her way to the front and claimed her second win of the season, but she finished out the year in the third spot in the points race.

The 2012 WORCS SxS Championship race proved to be an exciting year of racing, and it will only getting better in 2012 with the recent release of the all-new Can-Am Maverick SxS along with the new John Deere 850 RSX, which is also supposed to field a team for the 2013 race season, which will begin in January.