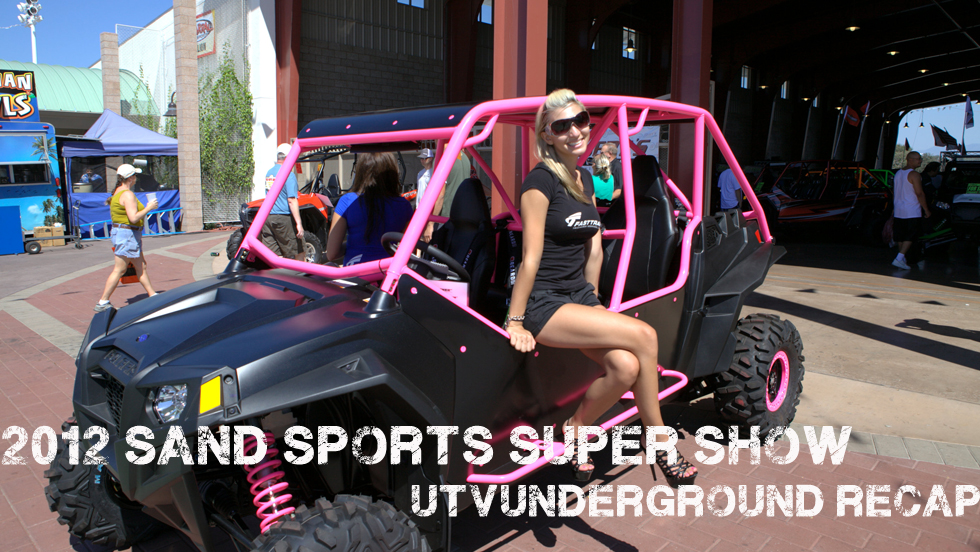 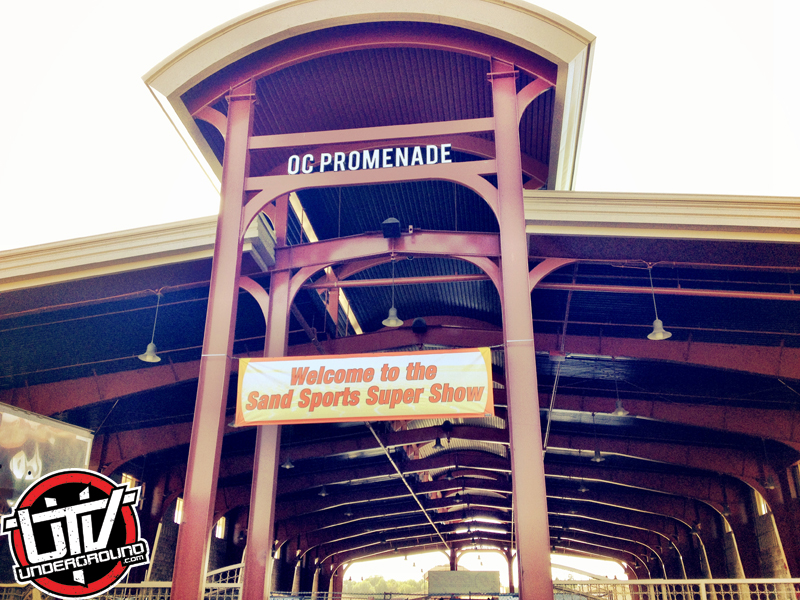 The 2012 Sand Sports Super Show (SSSS) will go down as being the year UTV’s officially took over!  While UTV’s have been a growing force at the SSSS for quite a few years now, it was obvious this year that UTV’s are not only here to stay, but have become the focus for many in the sand sports industry.  In addition to all the glorious custom built UTV’s and display units spread around majority of the booths at the show, unveilings of machines by Can-Am (BRP) and Arctic Cat highlighted things for those of us in the UTV industry.

The Arctic Cat that was unveiled was a custom built Wildcat by Wildcat Willy’s & D&P Performance. It was outfitted with a HOT flamed up paint scheme, custom interior, performance accessories, and a custom suspension.  Builders/Owner Dean Bulloch and Todd Stephensen were on hand all weekend long to talk about this machine as well as the other custom Wildcat’s they had brought along for display in Arctic Cat’s outdoor booth.  The Wildcat has become a popular option for sport minded enthusiasts and Arctic Cat took notice of the SSSS’s popularity to bring out their machines to display. 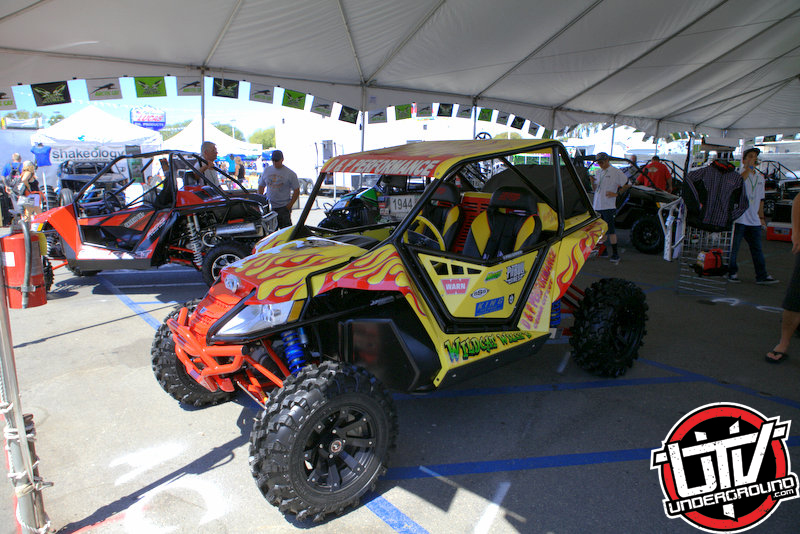 While it stood out from the crowd it was hard to undo the hype created by the Friday night release of Can-Am’s highly anticipated new sport model machine.  Can-Am did what no other manufacturer in the UTV industry has ever done at the SSSS.  They unveiled to the public a brand new machine with their new 101hp factory long-traveled sport model UTV called the MAVERICK.  Now while many involved in this industry knew Can-Am had this sport model coming, no one was prepared for what Can-Am did next!  They surprised the surrounding crowd of onlookers with another new platform with the new Can-Am Maverick MAX 4 seat sport UTV.  Sporting many of the same specifications as the 2 seat version, this MAX allows you and 3 others to take on the dunes and trails while enjoying the 101hp and factory 14″ long travel suspension.  These new machines are certainly envelope pushers and we here at UTVUnderground.com could not be more thrilled to see Can-Am drop a model with so much to offer.  To read more about the NEW Can-Am Maverick and Maverick MAX Click Here! 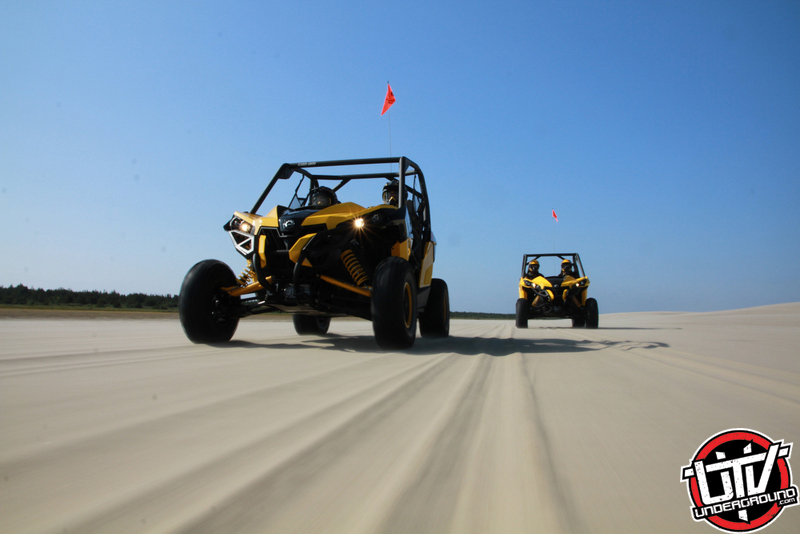 For the 4th year in a row UTVUnderground.com hosted a booth at the Sand Sports Super Show.  This year we partnered with our network affiliates Race-Dezert.com to host a booth that mixed business with pleasure.  Site sponsors Monster Energy kicked in drinks and giveaway swag once again and our freshly built 2012 Kawasaki Teryx4 was the feature vehicle for our booth.  Our Teryx 4 which has been under construction for most of the year sports a Magnum Offroad built Cage and Roof Rack, a Funco +6 Long Travel Kit with FOX Shocks, 15″ OMF Bead Locks wrapped in 30″ BFG KM2 Tires.  BEARD Seats hooked us up with a sweet set of custom seats and buckled in some new harnesses.  Big thanks to Magnum Offroad who worked hard to get this build done in time for the show! We have much more planned for this build so stay tuned to UTVUnderground.com!! We introduced 2 new shirt designs for 2012 here at the SSSS and gave away thousands of stickers to attendees and members of the site who stopped by.  We were thrilled to see and meet members of the underground through out the weekend and we want to thank each and everyone of you who made it by to show your support for our site. 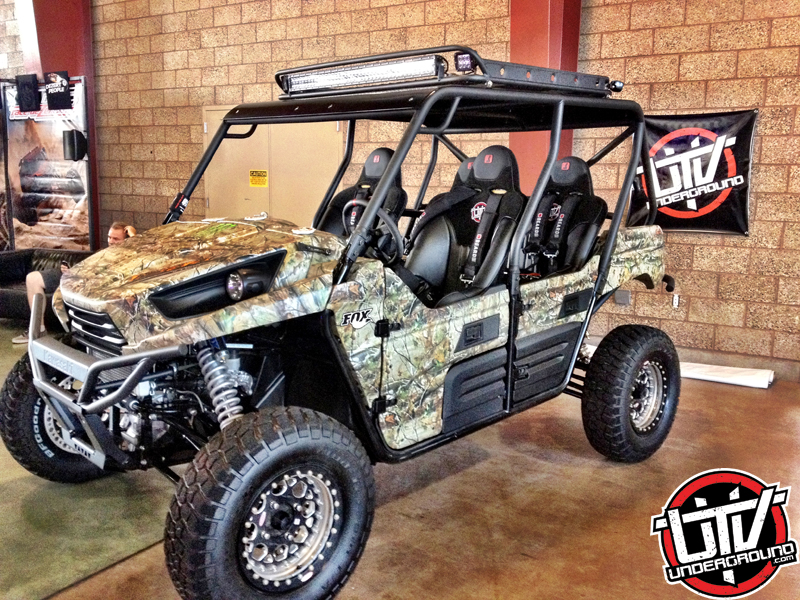 Our Kawasaki Teryx wasn’t the only UTVUnderground machine on display at this years SSSS.  Black Rhino spent the past 3 weeks building our brand new 2012 2 seat kawasaki Teryx 750 up for unveiling.  This new build has a Monster Energy Kawasaki graphics theme by ProLineWraps.com and sports custom suspension by XMF, shocks by Walker Evans Racing, led lighting by Rigid Industries, wheels by HiPer, tires by GMZ, custom fabrication by Black Rhino and so much more!  UTVUnderground.com wants to thank Black Rhino for all of their hard work and dedication to completing this build in time.  It looked awesome in the Black Rhino Booth! 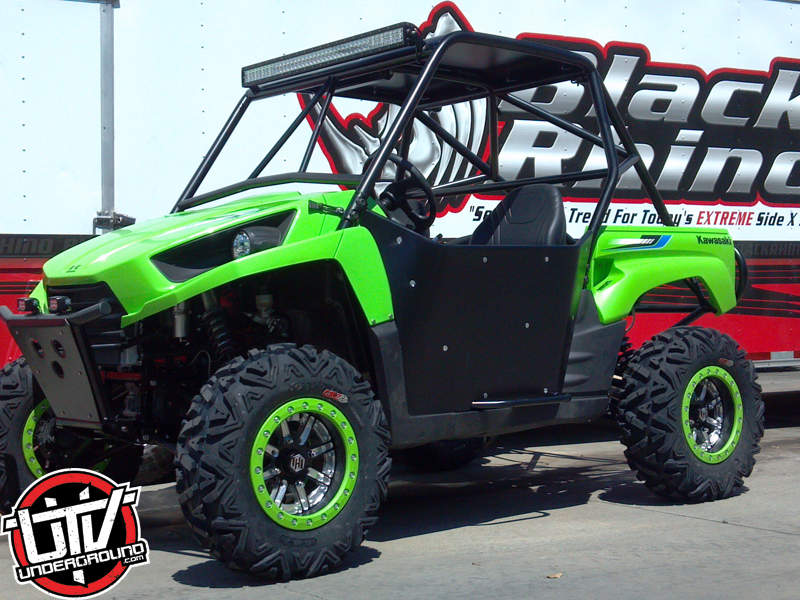 We also had our sweet new 2012 Arctic Cat Wildcat on display in the BEARD Seats booth.  This bad boy was looking pretty under the lights and featured some sweet new seats by BEARD made specifically for our machine.  ProLineWraps.com also did the graphics on our Wildcat while MotoSport Alloys kicked us some sick new bead lock wheels and tires. 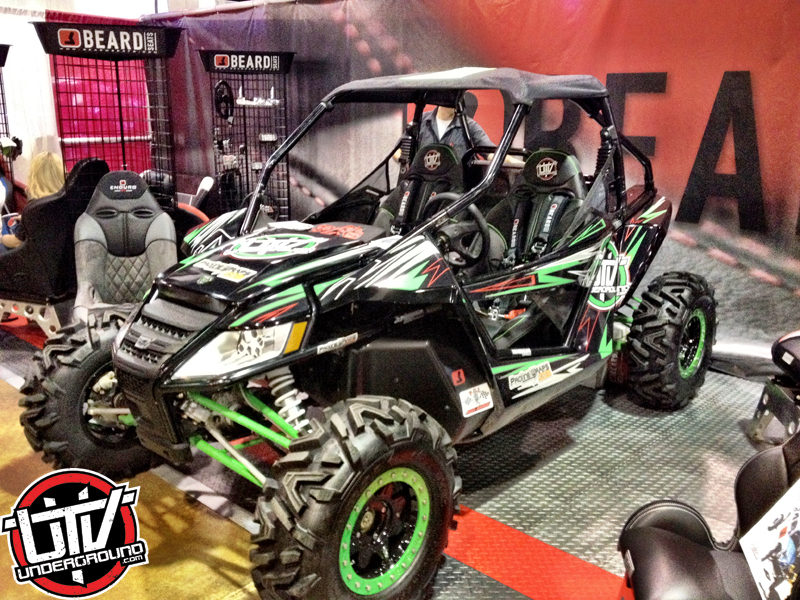 UTVUnderground.com looks forward to this show every year and we are already planning next years show! We want to give a special thank you to Shawn Parker and her entire staff at this years SSSS.  This year was not only the most organized I have ever seen it but it was also the most well promoted.  We are not sure of attendance numbers but it sure felt busy to us and at the end of the day is by far the funnest off-road related show we attend all year.  If you haven’t ever made it to the SSSS then make sure you mark it down for next year as we are sure it will be bigger and better than ever!  Maybe we can get a few more manufacturers to release some new machines????