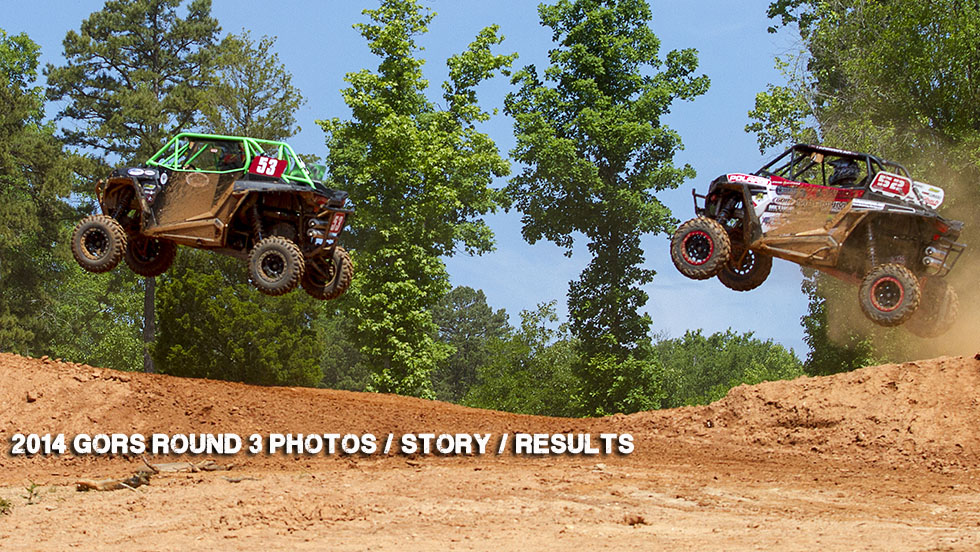 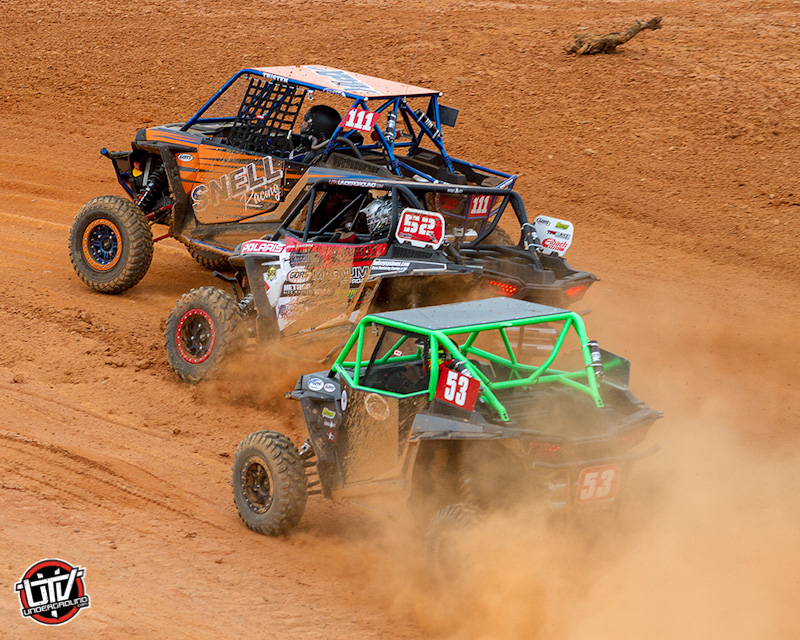 “It was a very competitive race today,” GORS Racing owner Tim Wyatt said. “This track—even though it was toned down—it was still extremely technical. The fast drivers found out that there is some skill into landing that car 50 feet up a ledge and landing perfectly in the 50 feet because with 55 feet you went too far. It was kind of like landing an airplane on an aircraft carrier. There’s no room for error. I thought the race was very good and very technical, very fast with some top drivers. That’s another reason why this is the top tier drivers on the East coast—because they’re the fastest guys and they prove it again every race.”

Compound MX had some major changes since the last time drivers competed on the track. Previously, there had been more lots of high-flying jumps, but, while there were still plenty of jumps, drivers had to be more methodical with jumps requiring greater execution.

In the first heat of moto one, Snell, Everett Bootle and Hans Ada jumped out in front of the rest of the pack with Snell and Bootle holding a slight edge in front of Ada.

“We kind of looked like we had a rope tied to us,” Snell said of running neck and neck with Bootle at the start of the race. “We just kind of took the inside line and me and him had it out front. Hans got around me in the first turn. When I said I was just going to lay back, it paid off.”

Ada and Bootle raced hard to gain sole possession of first place, but in the end, both of them were knocked out of the race.

“There was some pushing and shoving,” Wyatt said. “We’re going to have to wait and see on the outcome of reviewing all of the video to find out who is at fault,” Wyatt said.

Even with the race’s early frontrunners out of the race, Snell and Barker Wes kept the race competitive for another lap.

“They ended up not even making a lap and took each other out, so I just got ahead,” Snell said. “Second was running hard behind me and he ended up blowing a radiator hose, so I had the win wrapped up there. I just idled around the track the rest of the way.”

The second heat was a dogfight between Mike Duke and Jamie Annony.

“It was a good, clean race and it was fun,” Duke said. “He was right there behind me. We just had a good battle. That’s real racing right there, head-to-head. We had a great time; it was definitely one of the funnest races I’ve had since I’ve been racing side-by-side. That’s the kind of racing I like to do.”

Duke rode the inside line to an early lead with Annony right on his tail the entire race. Mickey Thomas was a close third until the top two drivers created some distance on lap four. During lap five, Duke and Annony took the hills hard with a checkered flag on the line. Duke, with moto one’s best-timed lap of 1:41.87 during the final lap, managed to hold off Annony for the win.

“When we started out the race there, I got a pretty good holeshot,” Annony said. “I got second and Duke was putting on a pretty good race, so I just tagged in behind him and hoped for a mistake more or less. He didn’t give me any mistakes. It was just a fun race to get up on his bumper and try to push him out of the way and get up front. All in all, that’s great racing. I enjoyed it. I tried to get him on that last corner of the very last lap, but he just wasn’t budging. He’s a really good racer and we race good together. I super enjoyed it, a very cool track.”

In moto two, Tristen Snell jumped out to an early lead with Annony and Duke giving him a push for the lead. Annony overtook Snell for the lead before falling out of the race all together due to engine problems. Snell ran into trouble on lap one and fell all the way down to ninth place. Duke completed the lap as the race leader before he had to pit with problems of his own on lap four.

By lap seven, Bootle gained the lead in the race and ended up winning moto two. Kieth Brooks finished in second place. Snell managed to race well enough to climb to third place. Brent Pettis was fourth, Patrick Murry fifth, and despite a long pit stop on lap four, Duke finished the race in sixth place.

GORS Racing will continue with round four June 14 at the HRD Motosports Complex in Gaston, SC. 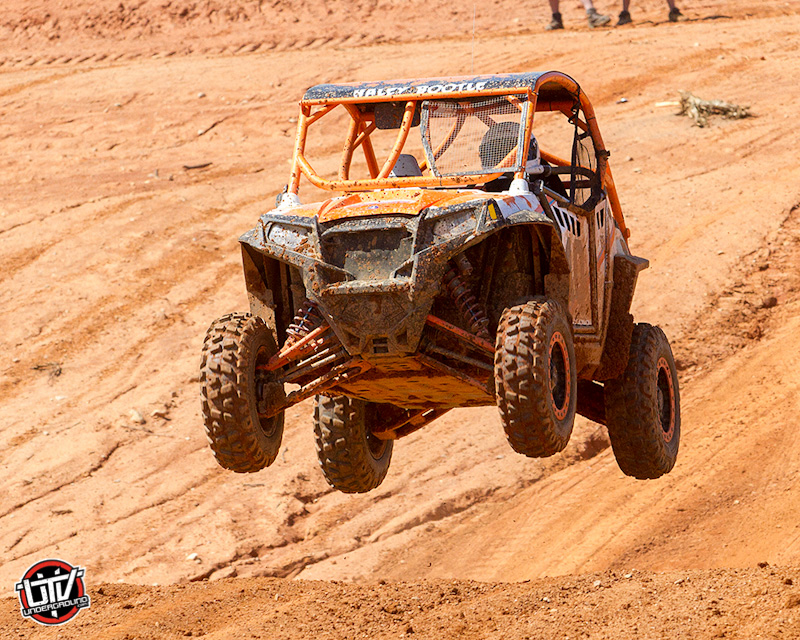 GREY COURT, SC—The results of the 900 class GORS round three race at Compound MX Saturday helped to break a three-way tie for second place in overall points and the outcome of the race did nothing to change first place.

Robbie Horton easily captured first place in both moto one and moto two to push his overall points total to 75.

“That always makes it fun, duking it out with somebody,” Horton said. “Eventually, we got up to the front and were able to keep it together to get the win.”

Pope finished second place in both moto one and moto two of the race to take sole possession of second place overall in points in the 900 series. Pope added 22 points for the day to give him a season total of 62 points.

“In moto one, we went out there and finished in second place,” Pope said. “In moto two, we were able to get the holeshot, took the lead for three or four laps. Robbie is such a good driver that he was able to put a clean pass on me and we finished second place.”

During moto one, Snell was overly aggressive on the hills of the track. This caused her to crash at one point, the culprit behind her fifth place finish. However, she seemed to learn to better maneuver the hills in moto two, overcoming an early deficit to Dillon Harper to capture third place.

Brandon Barker earned fourth place in both moto one and moto two to give him fourth overall for the day. On the season, he is fifth in total points with 18 points.

After finishing in third place in moto one, Harper had a tough fifth place finish in moto two to drop him to fifth place overall. He is fourth in overall points for the season.

The 900 series drivers enjoyed the track. Horton appreciated the challenge it offered.

“I love it,” Horton said. “I grew up racing Motorcross, and the more technical and the jumps and all that, the better for me. It does take a toll on you after an hour though. It starts beating on you.” 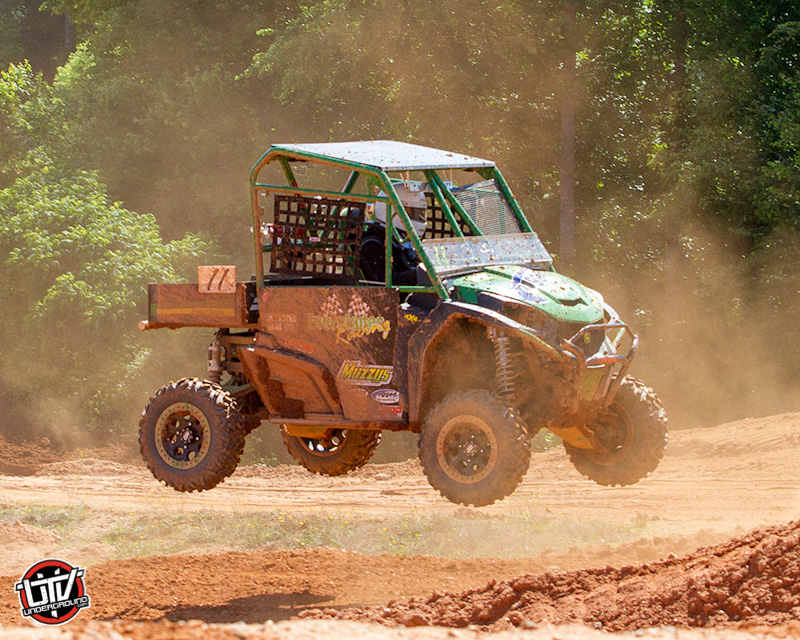 Lavin won the moto one, while Stewart, normally a 1000 class driver, finished in second place. Herrel had a respectable third place finish.

Stewart was driving a loaner 800 after badly damaging his car in round one, where he finished fourth overall.

Stewart bolted out to an early lead with Herrel close behind in second, while Lavin patiently waited in third place for his chance to move up.

Lavin was able to bypass Stewart and Herrell for the lead on lap four. Lavin narrowly held off Stewart for the win.

“I was excited,” Lavin said. “I had a bad morning. I broke a few parts, so I was just really feeling down. But it feels good now.”

Haley Bootle finished in fourth place, Jeff Peters in fifth place, and Luke Edmondson finished sixth. With severe damage to his car, Edmondson was unable to compete in the moto two.

In moto two, Stewart squarely won first place. Lavin was loaned a sway bar after his broke in moto one and he lost his muffler and had issues with his car’s suspension inmoto two,making what seemed a dead heat between he and Stewart for most of the race clear-cut by the end of the race. Still, Lavin worked through the problems to finish in second place.

Points leader Herrel had problems with his front differential and was unable to finish the race. By finishing the race, Peters was able to capture third in moto two and third overall for the day in the 850 series.

“Today at round three at GORS, with the No. 11 John Deere Gator, we ran as hard as we could with the issues we were having,” Peters said. “The biggest thing is we finished the race. We ended up third overall and that put us into the position to close the gap a little bit for first place in points, so it was a good thing.”

Peters pushed his points total to 60 for the season, while Herrell maintains his lead with 68 points. Haley Bootle, who entered the day tied with Peters for second place, is now third in points with 56. Lavin remains in fourth place in total points, but earned 22 points for his second place overall finish to give him 44 points for the season. Stewart earned first place overall in the 850 series.

Despite problems with his car, Lavin and several other drivers were pleased with the track.

“The track is good,” Lavin said. “It’s a little rough in spots, but I really like the jumps and they’re all smooth. There are a few rollers that are just beautiful.”