Home All Stories News 2014 King Of The Hammers 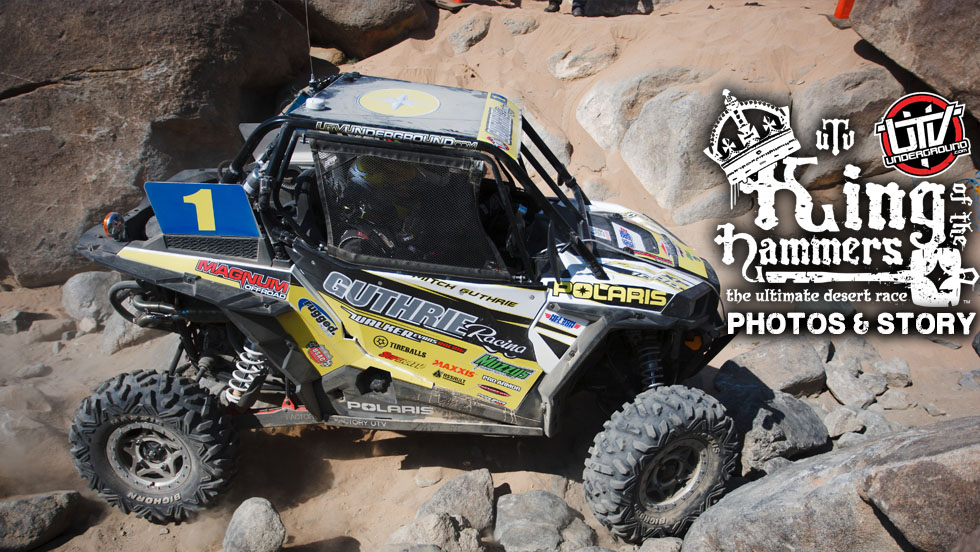 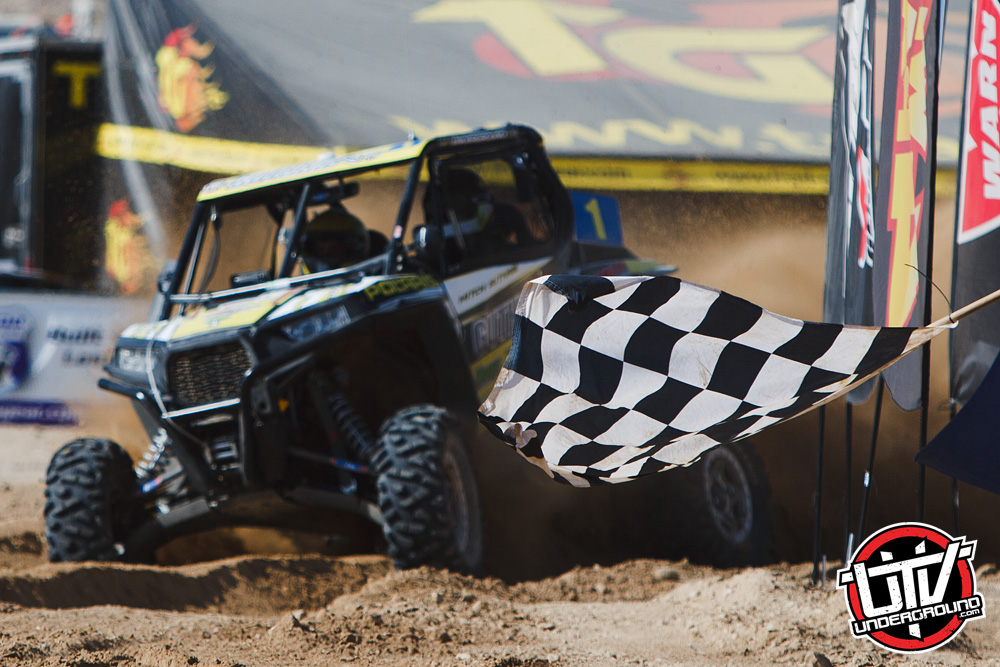 The 2014 King Of The Hammers (KOH) was in our opinion the best UTV KOH race ever.  Racers from all over the United States descended once again upon Johnson Valley, CA to take on what many say is the most challenging off-road race on the planet. Having witnessed this race the past 5 years, I can attest that in fact it is the ultimate test of man & machine.

Last year Dave Cole, owner of the King Of The Hammers event, designed a course that would forever be known as the most difficult UTV KOH course in the history of the event. This year, he decided that the same course would be fitting for the UTVs so he left it as is figuring that since only 3 finished last year that he had found the limit of UTVs. What he nor anyone else could predict was just how far the UTVs would progress over the past year!

UTVs qualified on Tuesday with the race to be held on Wednesday. This would be the first time that UTVs would ever qualify for a KOH race and in our opinion it was a fantastic idea. This allowed the fast guys to actually start up front, it did however add to the stress of many racers who now knew they needed to go out and beat up on their machine the day before the race. Luckily, the UTV qualifying course was a short one and was fairly easy on machine proving to be not only a great way to establish starting positions but also provide a good shake down run for competitors. 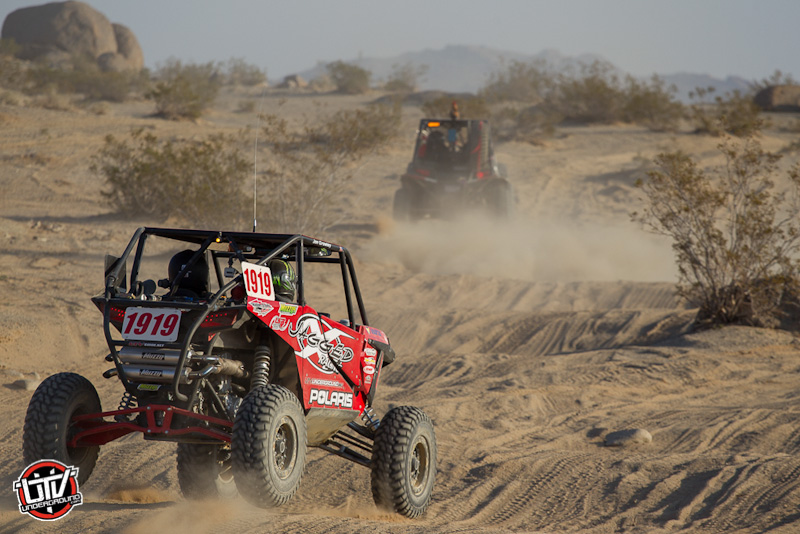 The usual suspects were all on the start list for Wednesday. The 4-time reigning KOH champion Mitch Guthrie was here with an all-new 2014 Polaris RZR XP1000. Blake Van De Loo and Jon Crowley would remain teammates for a 2nd year but would flip flop roles. With Blake being the driver, he would also take on the build this year and so he built a purpose built KOH racer out of a 2014 Polaris RZR XP1000 as well. John “Ducky” Duckworth would be back as well as the Jab Nasty team of Matt Enochs. Other returners such as Brian Bush, Branden Sims and Rob Usnick would also line up! In all, a total of 26 UTVs would line up to take the green flag and battle for their chance at becoming the 2014 King Of The Hammers UTV champ!

Racers would fly into the desert starting at 8am on Wednesday morning. 2 at a time racers would be set off the line and out into the 115 mile race course. Branden Sims who captured the pole in qualifying would enjoy an early lead but it was Blake Van De Loo who would make his way from the 10th position to the front of the pack by Pit 1 around RM40. Shortly after leaving the pit Van De Loo and Crowley would suffer a radiator problem that would force them to stop and limp the machine back to Pit 1 for repairs. This breakdown would cost them dearly as the lead machines of Sims, Bulloch, Guthrie, and Enochs would begin to put serious time on the rest of the field, as they would charge hard on their 1st lap. 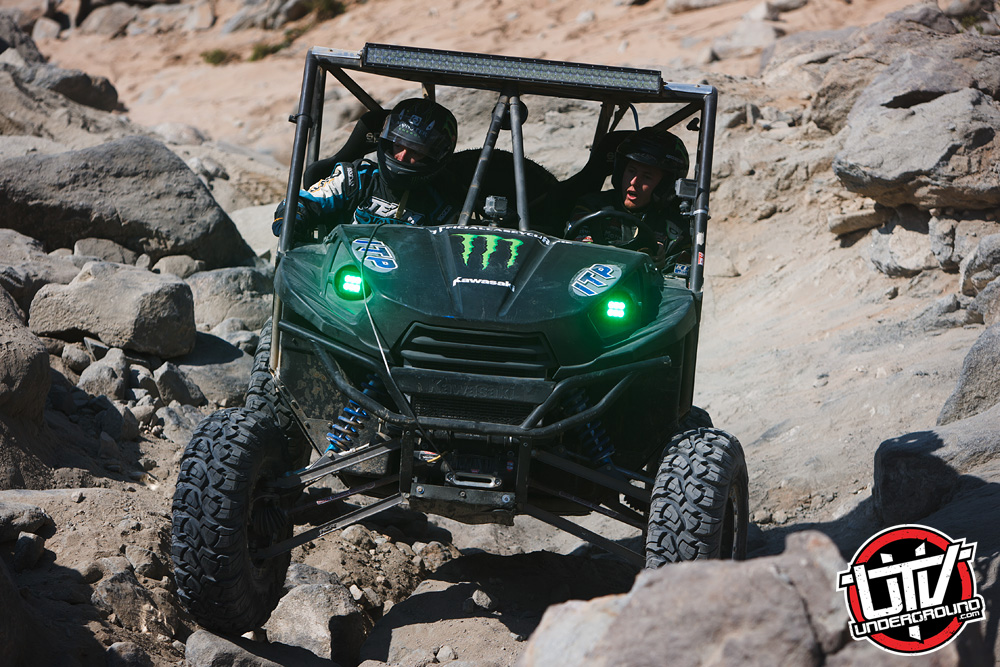 Lap 1 is the easy lap, consisting mainly of high speed open desert and whoops, its lap 2 that really introduces the challenging rock sections that KOH is known for. As by RM40 +/-, the 4-time champ Mitch Guthrie would find his way around the competition and enjoy clean air as the lead Pro UTV. Guthrie would push hard back into “Hammer Town” at the end of lap 1 but then would quickly pull into the pits.  As Guthrie’s crew began to work on a failing steering component, Branden Sims would make his way around and begin to really push and do his best to put time between he and the rest of the competition including Guthrie. While Guthrie made repairs, Dean Bulloch in his Arctic Cat Wildcat and Matt Enochs in his Jab Nasty Polaris RZR XP900 would make their way past him. Once the repairs were made it wouldn’t take Guthrie very long to real the leaders back in and by RM72 Guthrie was right on top of the now leaders of Branden Sims and Matt Enoch. As the pack entered Aftershock other racers would begin to catch up to the pack. Casey Currie, Brian Bush, and others would begin to really turn it on making the first half of this years KOH look almost easy.

While in Aftershock Guthrie would make his way around Enochs moving himself into second place behind Sims who was well on his way to the trail known as Hwy.19/20. But while the leaders were taking on that trail, sportsman racer John Duckworth would be hitting the first cut off trail for the sportsman class making the jump from Aftershock to pit 2 taking the physical lead of the race! Right behind him was Cody Currie in his new Kawasaki Teryx and those 2 would lead the UTVs into the popular Chocolate Thunder trail.

While the top 2 Sportsman now were running out front it would be the 3 Pros of Sims, Guthrie, and Casey Currie who would have to battle through Fissure Mt. and also make their way to Chocolate Thunder. They would remain in that order up Chocolate but once they hit Clawhammer trail at RM 89 it would be all Guthrie! Mitch made his way around Sims and began to push hard! By now Duckworth was well out front making his way up and through Elvis enjoying a huge lead over everyone else on course. The sportsman racer was looking like a pro and so was the racer in 2nd place, Cody Currie! 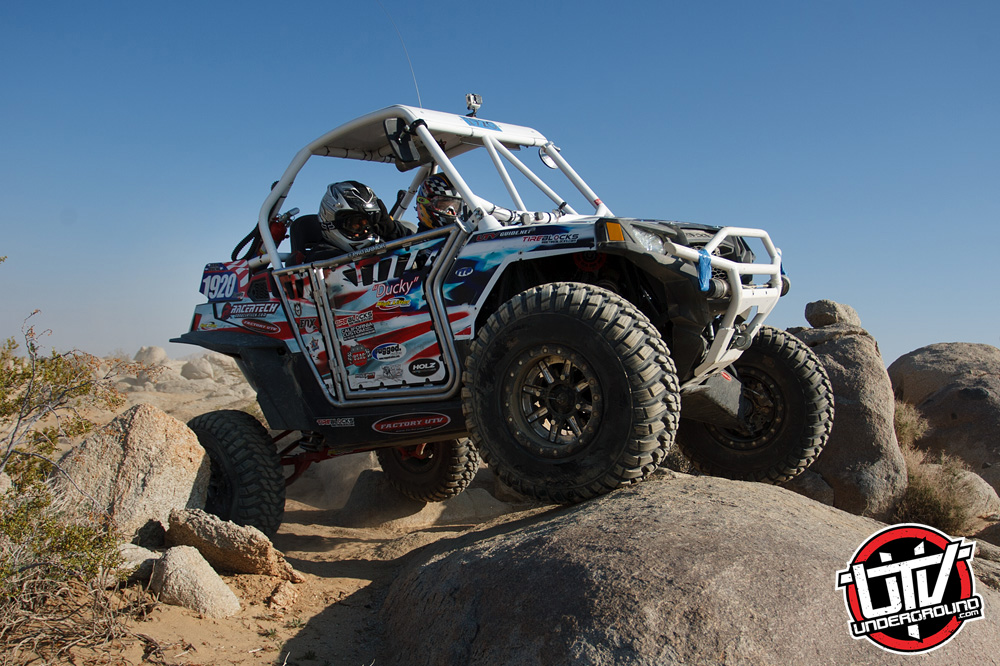 John Duckworth would maintain his lead through the finish becoming the 2014 Sportsman UTV Winner while Cody Currie would finish behind him by a few minutes taking home 2nd in the Sportsman Class. But just as Cody was enjoying his podium, the 4-time, now 5-Time KOH champion Mitch Guthrie and his son Mitch Guthrie Jr. would come barreling through the finish line to take home another HUGE win at the worlds rugged off-road race. Branden Sims would hang onto a solid second place finish that was simply amazing! And for his first time in 6 years, Casey Currie would find his way to the podium putting he and his Kawasaki Teryx on the box in the 3rd position for the PRO UTV class! Both Enochs and the Jagged X team of Van De Loo and Crowley would end up finishing the race proving that even while knocked down, you can always get back up!

There are more stories to this race then we could ever cover. I wish we could tell them all, even more I wish we could hear them all. Roll overs, mechanicals; injuries and more would take racers out of this race. But one thing surprised I think everyone and that was while last year only 3 barely made it across, this year more than 6 would accomplish this grueling course.

UTVUnderground.com is so proud to be a part of this event. We want to thank everyone at King of The Hammers for allowing us to be a part of this awesome event. We also want to extend our best wishes to Jason Murray of Murray Motorsports who suffered a severe hand wound during the race. Jason had to be air lifted out to try and get his finger repaired. We wish him and his team all the best and will update once we get word on how he is doing. 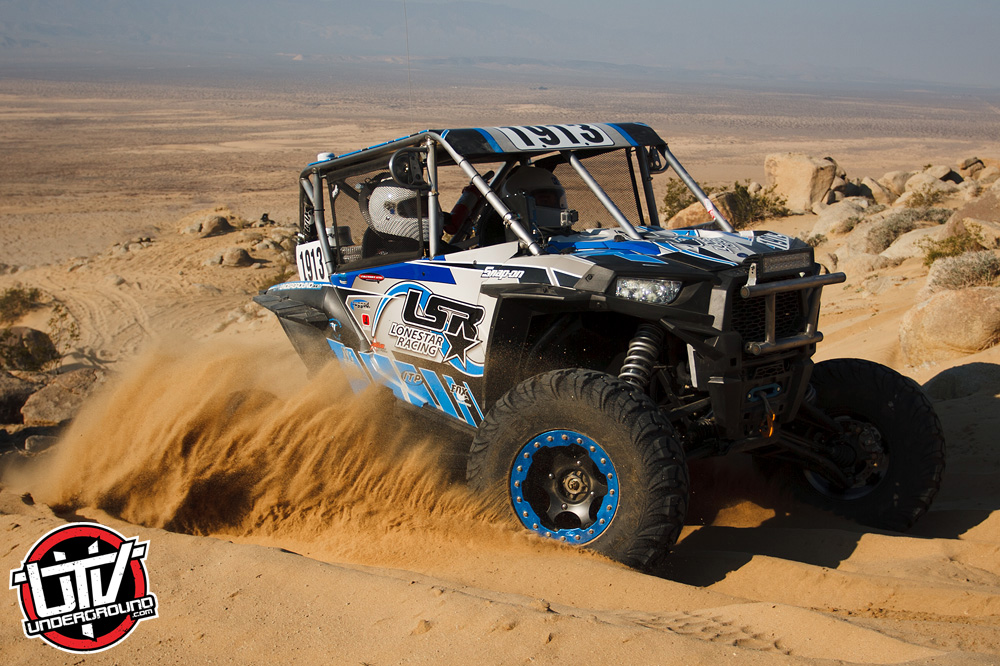 Thank you again to each and every racer and team who was representing UTVUnderground.com on and off the course. We had a BLAST this year covering the race and we can only hope that we will be back in 2015 covering yet another King Of The Hammers UTV race.