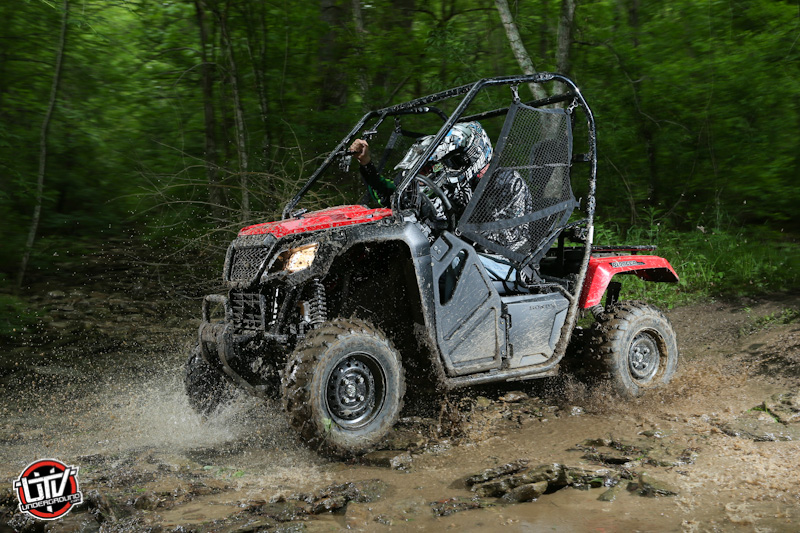 Nothing is more exciting than the thought of more and more powersport manufacturers entering the ever-evolving UTV culture with the looming thought of “what’s next”. Earlier this year Honda unveiled their utility based Pioneer 700. With the reliability and affordability that Honda is known for, we were ecstatic to hear about the release of yet another UTV from Honda just months later.

The trip to Cincinnati Ohio for Honda’s latest debut started at the wee hours in the morning after a last minute flight change (due to weather) and a two-hour phone conversation with United Airlines. I had never been to Cincinnati, OH before so I was really looking forward to being in Honda’s hometown with Honda’s top brass in our element; in the dirt behind the wheel of a UTV!

Not only were we in the hometown of Honda’s R&D department, Honda also lined up a once in a lifetime test track at legendary GNCC champion and factory Honda racer Scott Summers private ranch just outside of Cincinnati. I was absolutely blown away by Scott’s 110 acre ranch, I couldn’t help but think of all of the possible trouble I could get myself into considering we would be test driving 1 of 8 pre-production Pioneer 500’s.

With an embargo in place, all lips were shut and all units were under lock and key until test day. Due to a change in flight plans I actually missed the pre-ride introduction from Honda’s press department the day before, so I was really looking forward to seeing the new Pioneer for myself. The only thing I knew going into test day was that the new unit was a smaller Pioneer, nothing more nothing less. I’ll be honest, I was a little bummed when I heard the vague details that I had been given – we’ll blame United Airlines for this one. When the covers came off and the units were reviled excitement started to set in, anytime you get to be 1 of a dozen editors who get to test ride something before anybody else in the entire world, there is just something special about the electricity in the air.

A reintroduction was given for myself and a couple other editors who had flight complications, so I vigorously started typing away on my IPhone jotting down every word that I could while the press department gave another rundown of the new Pioneer 500. This isn’t something out of the norm for me; I’m a total geek when it comes to specifics of a vehicle. Grasping at their every word, I had to stop the presenter when he mentioned a 475cc motor and a 5-speed transmission. I thought I had misheard the presenter when he had first said it, for one I couldn’t even wrap my head around the fact that a UTV manufacturer had actually listened to the UTV community and introduced a sequential paddle shifted 5-speed electronic transmission into the market. Secondly, I was hoping I misheard that the new Honda Pioneer was 475cc’s. The first thing that ran though my mind was “how in the heck do you expect this thing to make it up a hill, let alone with a passenger?” Being a die-hard Honda guy myself, I remained optimistic and trusted that Honda would deliver a quality reliable product that Honda is known for.

Jumping right into the drivers seat of a shiny new red (it just wouldn’t be right to ride anything but a red Honda) Honda Pioneer 500, rain was starting to fall and the thought of mud splatters all over this brand new Pioneer had me as giddy as a school girl. Cautiously clicking through the gears in the open field and getting used to the new Pioneer 500, it was very clear that the Pioneer 500 didn’t lack in the power department. Although “only” 475cc’s I never once felt like I “needed” more motor at any one time. The new Pioneer 500 is just over 1000lbs and with a 50” trail-rated track width, this thing was nimble enough to carve its way though the trees on the GNCC style course and hooked up without hesitation.

The Pioneer 500 fits into both recreational and a utility in terms of category  Its 5.9″ of suspension travel does leave something to be desired as it pertains to charging through the bigger bumps. The fuel cell is pretty small at only 4 gallons, however with the ability to shift gas mileage can be increased but you won’t be doing any super long range runs in the Pioneer 500 without carrying some fuel. Since I mentioned carrying something, the Pioneer 500 does not lack in the rear storage department. The flat bed style rear cargo area allows for a ton of room to haul gear of all sorts. Its an affordable dual purpose machine that can haul the hay during the week and the camping gear over the weekend.

One thing that was very apparent was that the Pioneer is truly a unique UTV. Just like the Pioneer 700 the new Pioneer 500 wasn’t meant to set any world records or hit the Glamis scene by storm; and that was never their intended market. Although many of us (myself included) have been waiting for a manufacturer like Honda to come out with an XP1K killer, this isn’t it. It’s a true recreational UTV that you can throw in the bed of your truck without any issues, take it to the trails, make it home, and wont break the bank in the process. It’s a perfect machine for the entire family and would be a blast on the trails in places like Big Bear California or the backwoods of Wisconsin.

With a top speed of about 40mph, the new Honda Pioneer 500 put the power to the ground and not once did I ever feel like I was driving something inferior to the trails we were on. Shifting the machine is truly the high point for us sport minded riders. Something about running through the gears really gives you a sense of hauling butt and the electronic transmission shifts extremely smooth. Compact, affordable and fun – all of that with an $8500 price tag and the reliability that Honda is known for, the new Honda Pioneer 500 is an absolute BLAST!

I’d like to think that I have as much or maybe a little more seat time off-road than the average UTV enthusiast, and by far this was the most fun I have EVER had while driving a UTV… EVER! I couldn’t keep the smile off of my face and after the review of my in-car video; the non-stop giggles heard throughout the property were in fact mine.

To say that I am excited about the future of Honda in the UTV world is a huge understatement. Honda as a whole is making a great comeback from some of the darkest times in our countries economy and I’m confident that Honda will not disappoint once all of the cards are laid on the table.

…. “it” is coming… I’ve just got this good feeling about Honda… 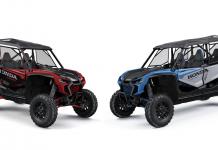