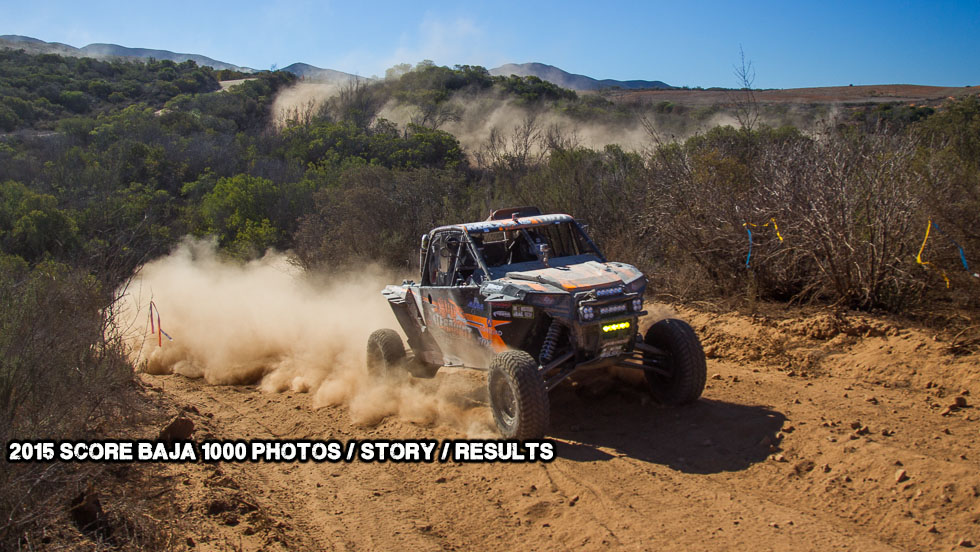 When SCORE gave UTVs their own Pro class in 2013 it was like an open invitation to everyone racing UTVs at the time to come take on Baja. Fast forward to 2015 and the Pro UTV class fielded 24 entries making it the second largest class in the historic race, second to only Trophy Truck, the events premier race class. The best of the best took on this years 800+ mile race. While the course itself was substantially shorter than most other Baja 1000 races, many will tell you this was certainly one of the harshest courses in years. Of course we do hear that comment every year. 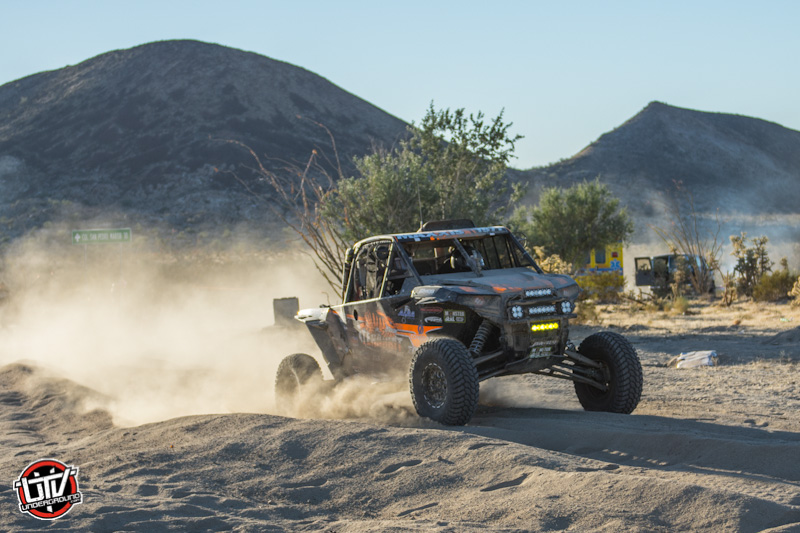 Its always impossible to cover every storyline that occurs during the race. Whats cool about Baja is that whether you complete the race, win it, go 5 miles, chase it, or just simply follow it online, you will always have a list of stories to tell. So much happens during the course of an event like the Baja 1000 that its impossible to give every racer their due love and respect as it pertains to the race. With that said, we will do our best to give you the cliff notes.

Wayne Matlock entered the race with team partner Terry Hui riding high off of their Baja 500 win back in June. Anyone who follows the class closely knew Matlock was going to be a handful for the rest of the class and was going to be a favorite especially if he could avoid mechanicals. In the end Matlock and Hui would do just that and in 22 hours time would complete the Baja 1000 making them the Pro UTV class winners for the 2015 event.

Johnny Angal was last years 2014 champion in his first time competing in the Baja 1000. He drafted speedster Branden Sims and a couple other young drivers in hopes of keeping fresh eyes behind the wheel. Like last year, Angal decided a month prior to the race to build another brand new machine to compete with. Throwing caution to the wind, Angal’s staff at UTV Inc. put together a brand new 2016 Polaris RZR XP4 Turbo in a few weeks time. The new #1921 shot off the start line like a bat out of hell and raced to an early lead and kept the new RZR up front for most of the first quarter of the race. Angal battled back and forth with Wes Miller in the #1988 Polaris RZR. Both were making some serious time on the competition but as is the case with many early leaders the pace ended up taking its toll on both teams equipment. Both teams would fall out of the race. 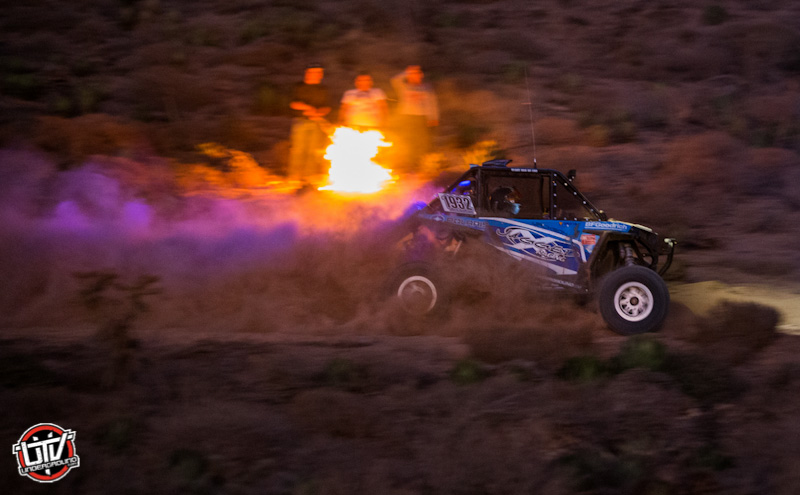 Brandon Schueler and the #1932 Jagged X racing team were coming to Baja for 2 reasons. First, they wanted to win, they always race to win. Second, they wanted to take home their second SCORE Championship in 3 years. The #1932 raced up front for the entire length of the race. They kept pace with the leaders and enjoyed their share of the lead at numerous points of the race. Their rivals in the #1917 Murray Motorsports Can-Am Maverick had stacked their team brining in the hot shoe of S3 Powersports and fellow Can-Am teammate Dustin Jones to try and help them bring home their first ever Pro UTV racing championship. The Murray’s have been close many times to bringing a Championship home, but never have they been able to close the deal. Schueler on the other hand is a 6-time Pro UTV Champion at BITD and his Jagged X team also won the 2013 SCORE Championship with former teammate Matt Parks behind the wheel. More than a battle between them as competitors is always the looming OEM battle between Can-Am and Polaris. Its no secret that both brands are doing all they can to win races and championships. Polaris has enjoyed the bulk of success winning all of the Pro UTV championships thus far.

Unfortunately for Can-Am and the Murray’s they will have to wait one more year for their shot at winning a Pro UTV championship. They suffered a couple mechanicals early on in the race setting them back to 21st place before RM100. They would spend the rest of the race trying to claw their way out of the hole and into some sort of podium contention. Many of us watching the race thought that there was no way they would even finish the race but they fought and fought, inspired by the Baja mystique of never giving up. While Jagged X would race on to a second place finish and their second Pro UTV Championship, the Murray’s would continue to fight and make their way to the finish line after being on course for over 30 hours! Schueler would finish in second only 25 minutes behind Matlock. The finish would earn Jagged X and their #1932 Polaris RZR program the 2015 SCORE Pro UTV Championship. Jagged X continues to prove themselves as the team to beat and shows exactly why they are considered the elite team in UTV off-road racing. 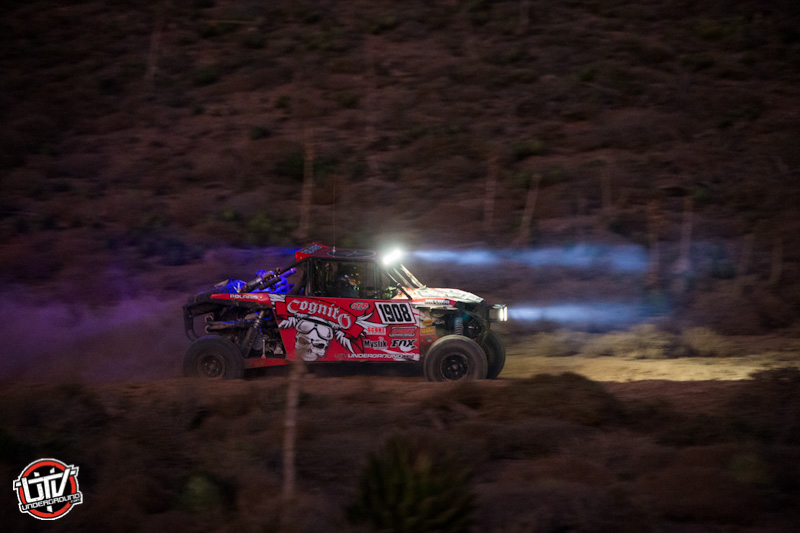 Justin Lambert and his #1908 Cognito Motorsports Polaris RZR are always contenders. They always show up prepared and with a machine capable of winning at any moment. The #1918 would run in the top 3-5 positions for the entire race, at one point would take the lead on corrected time. However with their tracker not working for 90% of the race it was hard to see if they were still in it, or had they fallen out. We would get updates sporadically stating they were still in the top 3-5 with BFG pit times showing them flying through the course. At the end of the day, it took the team just over 23 hours to complete the brutal Baja 1000 course for a 3rd place finish!

4th place would go to Pro UTV new comer Dan Fresh in the #1939 Polaris RZR. We wanted to mention Dan and his team because they showed up unannounced with a brand new car that had less than 50 miles of test time on it. Magnum Offroad built them one of the nicest UTVs we have ever seen and it performed almost flawlessly. While the team missed the podium they still got a finish and for anyone who has raced Baja before, you know in many cases a finish is as good as a win! Other finishers were Ben Bischoff in the #1923 Polaris RZR, Cory Sappington in the #1904 Can-Am Maverick, our boy Alonso Lopez in the #1949 Polaris RZR, Benjamin Wilson in the #1927 Polaris RZR, and Tyler Backus in the #1922 Polaris RZR. Congrats to all of these guys for finishing this gnarly race. 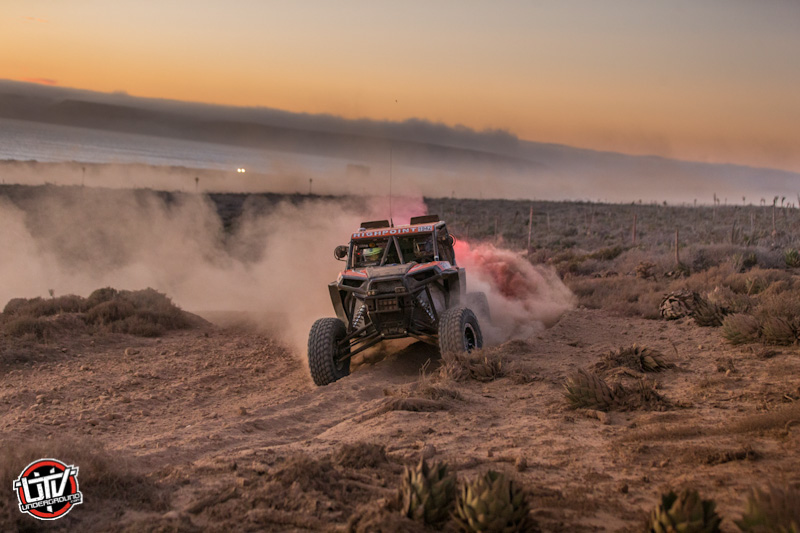 There are always more heart break stories then there are successful stories as it pertains directly to the race itself. Only one team can win. But taking on the Baja is more than just a race, its an experience and win or lose you always go home with some level of experience and in most cases its good. Baja can and always will be dangerous and so far we haven’t heard of anyone in our class suffering a major injury which is huge and always most important. To those who came to compete and didn’t finish, don’t give up! Its all part of the journey and makes those finishes, podiums and wins that much more sweet.

Thank you all for your support of UTVUnderground.com. To those of you who tracked the race with us on the forum and in social media, thank you for your participation. To the UTVUG staff that spent over 30 hours chasing and covering the race for us and for the class, you are the best!! Majority of UTV media will sit home and wait for a PR and some photos to float there way, but not us. UTVUnderground.com lives this sport, we love UTV racing and we are committed to continually giving you guys some level of coverage strait from the side of the course! 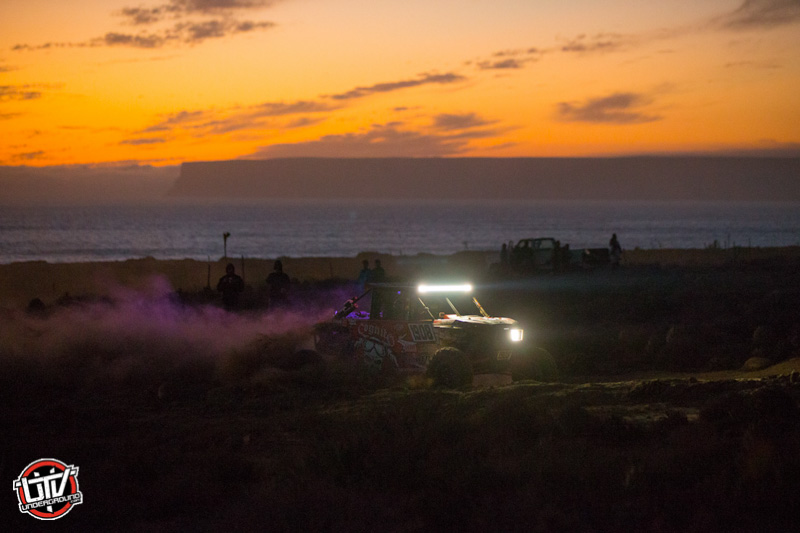