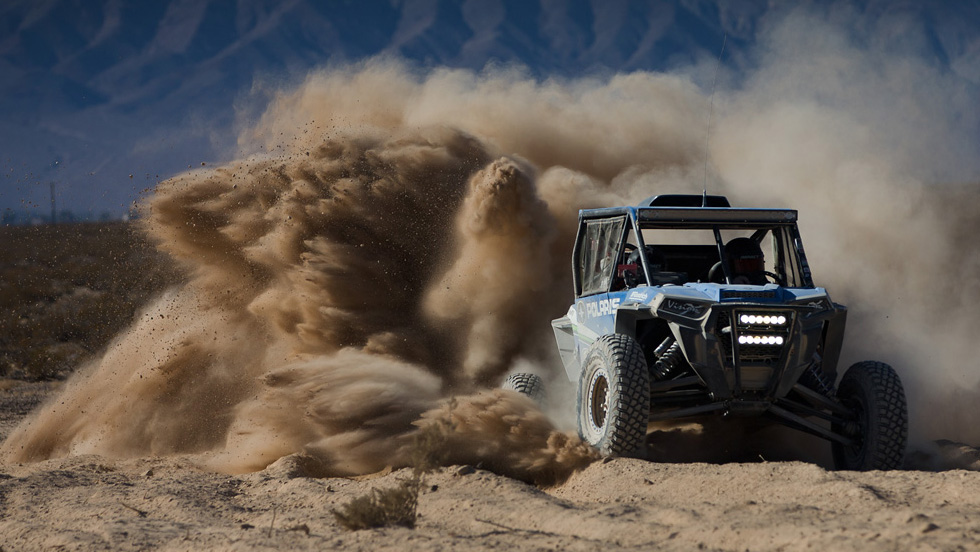 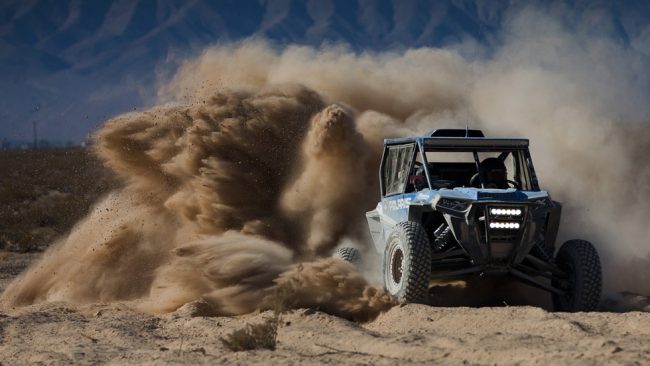 The 2017 Best In The Desert (BITD) race season has come to a close. It was all wrapped up in the desert town of Pahrump, NV for the Pahrump “Nugget” 250 Presented by Polaris RZR.

Once again UTVs filled the field with nearly 50 UTVs competing across three classes. Conditions were much more pleasant then expected based on initial reports and memories of the 2016 race where temps dropped and high winds filled the air. Ideal race (weather wise) made for an enjoyable day of chasing the 250 mile race. However, the desert wasn’t going to let racers off too easy.

Dust was the name of the game and within a mile of the start, racers were blinded with near white out conditions. Dry dirt quickly shifted to silt and with no wind the valley for which racers would circle became a dust filled zone. From a distance it resembled early morning fog drifting through a coastal region, but this would never burn off.

Mitch Guthrie Jr. and his Factory Polaris RZR would lead the field off the line, enjoying a number one starting position due to his win in Tonopah. The field chasing him down was running hard and by pit 2 Matt Burroughs in his Monster Energy Can-Am had overtaken the lead. It looked as if Burroughs would run the table and take the race as he led all the way until the RM200 point. It was in that area that he would suffer a mechanical that would result in hours of downtime and push him way out of the top 10 for a 16th place finish. 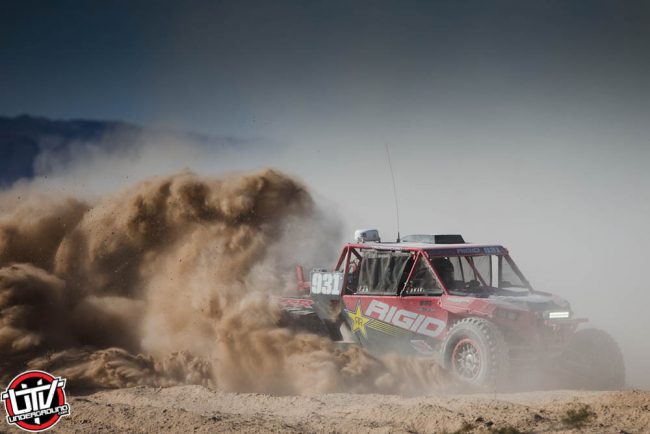 Guthrie Jr. would experience his own troubles. An early flat tire is what gave the lead up to Burroughs, and after a very quick pit stop at Pit 3 he would charge back into pit lane only to be called back in by his crew after noticing he had a bent wheel that wasn’t spotted during the stop. Craig Scanlon was able to leap out in front of Guthrie Jr. during that stop, but Scanlon was soon met with a flat himself. Scanlon kept his SMG Polaris in the top 10 throughout the day and was on pace to finish around 7th overall. But like Burroughs, with less than 30 miles to go, he would suffer a hit that would cause a self inflicted mechanical. He would settle for a 17th place finish.

Brandon Schueler, coming off of one of the biggest wins of his career at the 2017 Baja 1000, and was piloting his same 919 Jagged X Polaris with a ferocious pace. Schueler & Guthrie Jr. were both separated by mere points just behind Phil Blurton as they competed not only for a race win but also the season championship. Both Schueler & Guthrie Jr. would need top honors in Pahrump and would need a little bad luck to hit Blurton if they were to sneak into the championship fold. With Schueler carrying over the same momentum he had in Baja, he was running a solid pace and was contending for the top corrected & physical position for most of the race.

The Jagged X team is a well oiled machine. They have had the type of success in off-road racing that most simply dream of. Schueler has fallen out of the top driver conversation for most of the year, suffering the inevitable racing lull that hits so many racers. But Schueler is a competitor in every sense of the word. Never one to give up, and with a team full of years of experience, Schueler has remained consistent throughout the season. So much so, he has remained in the championship hunt despite lacking the big wins that Guthrie Jr. & Blurton have had this year at BITD. But Schueler was riding high coming off of that Baja 1000 win and was primed to make a statement in Pahrump to remind everyone that he and Jagged X racing was not one to be taken lightly. As Schueler stormed through pit after pit, strategy kicked in. A fast and efficient fuel stop at Pit 4 allowed Schueler to make that his only stop of the day and as he passed a broken Burroughs and headed on through the final pit there was nothing that was going to stop him other than luck from finishing the Pharump 250 first. 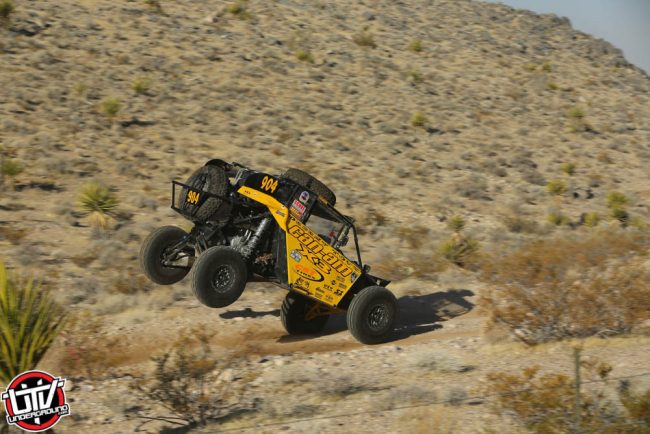 While it was easy to fixate on the top physical runners, many of us began to perform time splits as the race went on. By the midway point, both Blurton & Justin Lambert had began making a huge charge from deep in the pack. It was soon apparent that Lambert and Blurton were both on a mission to capture the win on corrected time. By the final pit Lambert had moved into the top 3 physical and was charging hard to run down Schueler. Blurton was slowed just enough to push him out of the race for the win, but Lambert & Schueler were in a virtual drag race. Schueler would cross the line and would park his RZR in angst as we all waited to see just how long it would be until Lambert would finish.

Minutes later, the 918 Cognito Motorsports Factory Polaris machine of Lambert would come across the finish line, literally out of gas.  Lambert took a risk on fuel in hopes of it paying off, and it nearly did. After a couple of minutes of intense waiting corrected time scoring would come across and show that Schueler would maintain the win by only seven seconds! One of the closest finishes ever and while Schueler celebrated a huge victory, Lambert struggled to find joy in his podium finish. Lambert was coming off a year full of ups & downs as he transitioned into the Pro Turbo class. In 2016 he ran the table, dominating the season and finishing undefeated with many wins being overall victories having beat the Pro Turbos.

Guthrie Jr. would cross the line third physical but another racer came from deep in the pack to take the third podium spot on corrected time. Pete Libby in the 920 Can-Am would roll up the BITD podium with tears in his eyes. A hard fought finish and a season full of challenges flooded the 39 year old as he was interviewed. You could see and feel his joy.

Phil Blurton who blasted onto the scene in 2017 with wins at the coveted UTV World Championship and Vegas To Reno, would finish three minutes behind Libby for fourth position. The Factory Can-Am racer would just miss the podium but would secure the 2017 BITD Pro Turbo season championship. Blurton should also be considered for Rookie Of The Year honors. His speed & consistency proved that he should not only be considered amongst the best the series has to offer, but also amongst the best that Can-Am employs on their factory roster. No one has ever came on the scene quite like Blurton did this year. 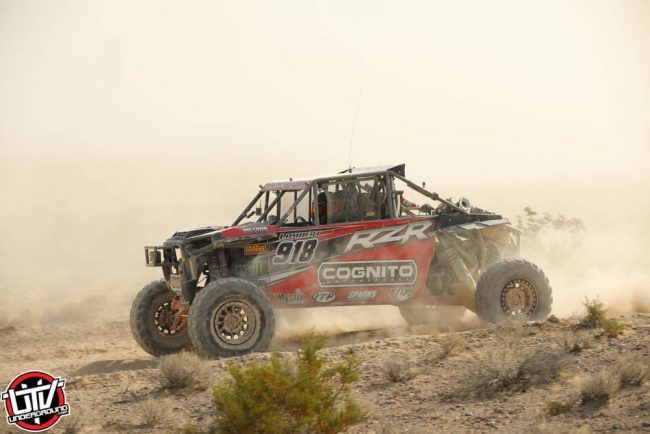 18 racers would finish in the Pro Turbo class, 11 would DNF. The DNF list looks much like a top 10 line up at any other race. Names like Murray, Sims, Carver, Piplic, Gastel, and Ellstrom are all names you could see on the podium. It proved that while Pahrump is indeed a fast race, it is also full of “gotcha’s” that can take out even the best.

While we ran up top, behind the Pro Turbo class was a hard charging Pro UTV class as well. Jonathon McVay would take top honors with Russell Griffen finishing in second. The OG of the UTVUGRaceTeam, Robert VanBeekum would round out the podium. The top three were separated by less than 10 minutes showing that competition in that 1000cc max naturally aspirated class is still running at full song. If the points shake out according to our calculations, Griffen and his Keyscrete Polaris RZR should capture the season championship in class.

While Pro Turbo & Pro UTV continue to prove why they are now considered amongst the premier ranks of BITD, Pro racers in the UTV Unlimited class continue to battle to prove legitimacy. Much discussion surrounds the class as to whether or not it will remain in 2018 while racers competing in the class love the competition. Despite arguments that most in Unlimted are racing vehicles that could easily qualify for the Pro classes, we have seen the Unlimited class take the place of the former Sportsman class giving those not able to or willing to run in the larger classes a place to compete for wins and take in the full BITD racing experience. Nevertheless, there are some stiff competitors fielding the Unlimited ranks. 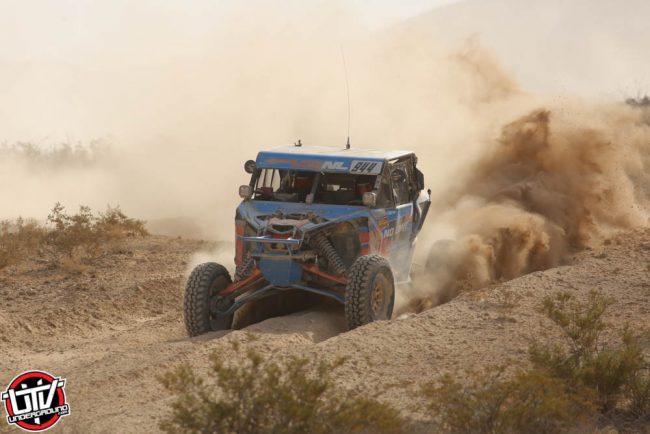 Unfortunately at Pahrump, only three unlimited vehicles would make it to the finish line. With that said, all three finishers are fast and able competitors who are turning heads and having a great time doing it. Tony Riggs in the 2912 SPARTA Racing Polaris would bring home the win in Pahrump with the highly competitive Michael Isom in his Can-Am finishing second almost 20 minutes later. Rounding out the podium was one of the nicest guys in the sport. The leader of the S3 Powersports Factory Can-Am effort, Mr. Malcom Sneed. Sneed has found a home in the Unlimited class and at 57 years young is having the time of his life.

With results all being unofficial at this time and without announcement from BITD, we are unsure of who the Unlimited class champion is at this point and for that we apologize and will update our story and any of the standings below ASAP once we have word from BITD officials.

Its been another year of racing and fun at BITD. Once again I want to take the time to say thank you to each and every racer, team and company that supports UTVUnderground.com and runs our colors on and off the track. Its because of you that we do this. We also want to extend a thank you to Polaris RZR for providing us with much of the budget that allows us to cover these events. As the years go on it gets more expensive and harder to find the help needed to cover the races at the level we like too and at the level you expect. With that said, there is no other place we would rather be then chasing you all through the desert and bringing the tales of victory and defeat back to the readers here at UTVUnderground.

Until next year, keep your face in the wind, the rubber on the ground and your spirits in the clouds! 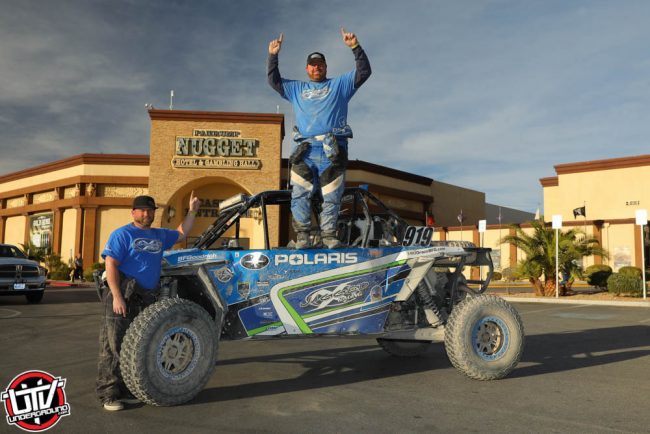 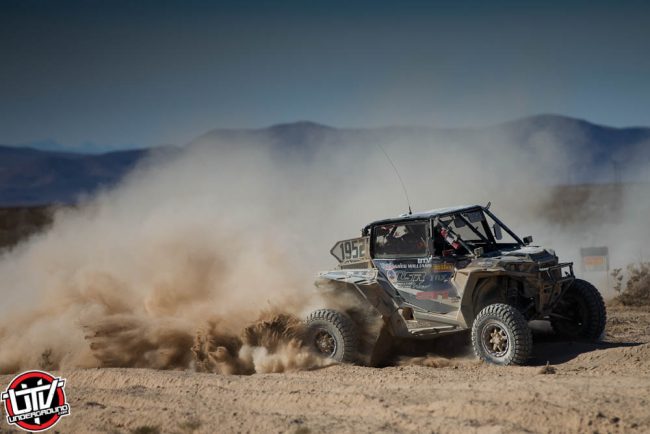 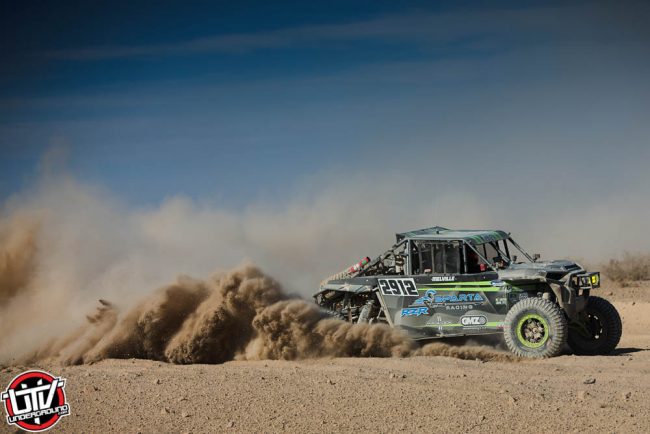