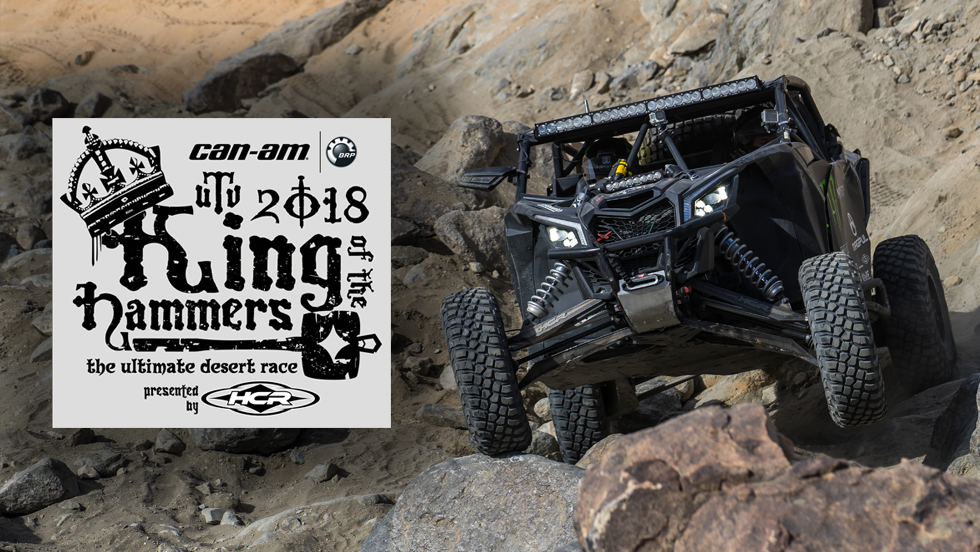 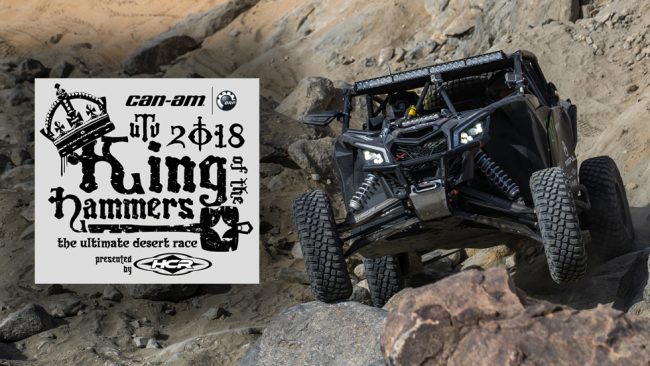 One of the most popular off-road events of the year is back! The 2018 Nitto King Of The Hammers Powered by OPTIMA Batteries is here and its time to get prepared! While many UTV racers are already on the lakebed, teams, companies and spectators alike are preperaring for the week of festivities inside and around “Hammer Town USA”! Below are some details to help you make you maximize your week and get prepared for all of the festivities!

With over 100 UTVs registered to take on this years Can-Am UTV King Of The Hammers Presented by HCR event, the UTV race is slated to be one of the hottest races of the year! Past KOH UTV winners Mitch Guthrie, Blake Van De Loo, and Shannon Campbell are on the list and ready to battle along with some other big name racers like Robby Gordon, Casey Currie, The Gomez Brothers, Loren Healy, CJ Greaves, Johnny Greaves, Bailey Campbell & Wayland Campbell. Other UTV notables to watch for are Mitch Guthrie Jr., Branden Sims, Phil Blurton, Marc Burnett, Jason Weller & Dean Bulloch.

UTVUnderground.com will hit the lake bed early in the week to partake in preparation alongside the competitors and will bring its industry leading coverage back to our fans here at UTVUnderground.com & our social channels. Mad Media will be on hand covering the event in video for us & Polaris RZR and look forward to releasing some amazing Polaris RZR sponsored coverage.

Both Can-Am & Polaris RZR will be on hand offering demo rides to the public while showcasing their latest offerings. Polaris RZR will highlight and give consumers their first chance at driving the all-new 2018 Polaris RZR RS1 center seat machine that was released on January 31st, 2018.

Stay tuned to UTVUnderground.com for the latest news & information and follow us on social media for up the minute coverage and updates!

See our 2017 Coverage by CLICKING HERE

What started in 2007 as a bet between friends has exploded into one of the largest off-road races in the world. Held at California’s Johnson Valley OHV Area the week of February 2nd through 10th, over 50,000 people show up for the “Mad Max meets Burning Man” event known as King of the Hammers (KOH). What is considered the toughest one-day off-road race is the final event in a week packed full of racing a variety of vehicle types ranging from motorcycles to UTVs, stock, stock modified, and ULTRA4 vehicles (unlimited four-wheel drive). One common denominator rules at KOH: the drive to innovate, push the limits, and leave it all on the table as each racer strives to be King. The event answers back by celebrating each and every competitor, and giving a platform for all to shine whether a seasoned, well-funded team to the lone fabricator spending sleepless nights creating their rig on a shoestring budget, just like the crew that started it all a decade ago.

Attending KOH is a one-of-a-kind experience with a showcase of the newest off-road parts from a myriad of vendors, up close access to the pits, racing action on the famous Hammers trails, and the village vibe of Hammertown – the makeshift city built specifically for the week of racing. For those who can’t make the pilgrimage to Means Dry Lake, a substantial schedule of live webcasting and live chat allows fans from across the globe to keep up with all things KOH. In 2017, over 1.5 million people watched the action online.

February 3-4, 2018 – Schampa King of The Motos
Just as KOH mixes elements of rockcrawling and desert racing, King of the Motos (KOM) covers all the varied terrain present in Johnson Valley. Now in its seventh year, course designer and moto legend Jimmy Lewis keeps upping the ante for KOM to earn the reputation as the hardest enduro race in the country. Some past competitors have even moved down to the amateur race as a result. The entrants are just as varied as the terrain, hailing from all over the globe and focusing on motocross, trials, and enduro disciplines. A favorite part are the land rush starts, and the action is epic when the first one takes place under the blanket of darkness on Saturday night. It’s a memorable way to launch an unforgettable week.

Monday, January 5th – Holley EFI Shootout presented by KMC, King, and Action Sports Canopies
This event is arguably as entertaining to watch at KOH itself, and can take credit for why so many people show up early to Hammertown. On Monday night, rigs ranging from homebuilt rockcrawlers to southern rock bouncers from SRRS to compete for the fastest time up a huge vertical ledge. It’s KOH’s unique version of drag racing. Traditionally held at the Backdoor obstacle, the Shootout is moving closer to Hammertown for 2018 to accommodate more spectators. There are stadium lights and announcers with thousands of people lining each side of the course, cheering and heckling the drivers.

Who To Watch-
Bobby Tanner- Past Shootout winner in “Screamin Blue” and patriarch of the Tanner clan, who are pioneers in rock bouncing
Mike Slawson- Brother of KOH winner Randy Slawson, and past KOM competitor who now has his own Bomber car
Ritchie Keith- Driver of “Plowboy”, Keith is a rock bouncing legend easily identified by his yellow and green John Deere paint schemes
Jesse Haines- Rockcrawling champion and accomplished fabricator, Haines will be competing in his recently completed buggy with 42-inch tires and rear steering

Tuesday, February 6th – Qualifying
Rather than determining starting order at random, a short course near Hammertown is used to put the fastest vehicles up front on race day. The course contains all of the elements of KOH, just in a bite-sized package. Live streaming of the biggest names takes place during the “Power Hour” at the end of the day, but the best seat in the house is right next to the qualifying course.

LCQ- There are a variety of ways to prequalify for KOH, including past performance at the event and sanctioned Ultra4 races throughout the season. These drivers qualify for starting position on race day, but there are others for whom the stakes are much higher. The Last Chance Qualifier (LCQ) provides an opportunity for entry to the top 25% of the LCQ field. Sounds impossible? Both Loren Healy and Randy Slawson have won KOH in the past after earning their spot in the big show through the LCQ.

Who to watch on Tuesday-
Jason Scherer- Perennial fast qualifier not just at KOH, but nearly all Ultra4 events
John Currie- Past EMC winner from Currie Enterprises, moving up to the 4400 class
Rick Waterbury- 2016 Legends class champion debuting new 4400 car
Jordan Townsend- Moving up to 4400 from 4500 after taking the year off to put his wife through EMT school
Mike Bergman- Qualifying in a Can Am UTV, the rules allow it and he qualified this way last year.

Wednesday, February 7th- Can-Am KOH UTV Race presented by HCR
The average Ultra4 car uses 40-inch tires. The average UTV uses 29-inch tires, and they race on many of the same trails! Few finish each year, but that hasn’t stopped the UTV class from exploding in popularity. So much explosion that the word of the year for the UTV category at KOH is growth. Massive growth and a seriously competitive field. Mitch Guthrie, Sr. has dominated the UTV race nearly every year, and technically the most winning “King” at King of the Hammers, but more and more 4400 drivers are tossing their hat into the UTV ring.

Who To Watch-
Shannon/Wayland/Bailey Campbell- Last year the Campbells squashed any concerns about spreading themselves too thin by finishing 1-2 in both the UTV race and 4400 race.
Casey Scherer- Jason Scherer’s brother won races in 2017 in his Can Am, demonstrating that speed runs in the family.
Larry Gipson- Past 4400 racer who took a few years off to focus on family, but is coming back with his all-or-nothing mentality.
Ross Pilgreen- Portal axle UTV from Arkansas looks like a mini Ultra4 car.
Robby Gordon- Putting his own Textron UTV design to the ultimate test in Johnson Valley.
Casey Currie- Longtime short course racer will also compete in 4400.
Bailey Cole- Driving a Robby Gordon-prepped Textron UTV in addition to competing in EMC and 4400.
Bill Baird- Former 4400 driver dusts off his race suit to bring his wheels-up driving style to the UTV class.
Raul/JP/Darian/David Gomez- Two generations competing in UTV from Gomez Brothers Racing.
Dean Bullock- Former snowmobile racer and rockcrawler has been on the podium in the UTV race in the past and hopes to be on the top step this year.
Sara Price- The latest Hoonigan team driver had a rough go in 2017, but that has not deterred her from racing her UTV again this year.
Phil Blurton- More at home than the desert than the rocks, but he is no stranger to competition and has done his homework.

Who to watch-
Brad Lovell- Rockcrawling and short course champion is the epitomy of the Legends class, running the same Ford Ranger buggy in Ultra4 for the past decade.
Jessi Combs- Host of The List: 1001 Car Things To Do Before You Die is racing in 4600 on Thursday and 4400 on Friday.
Vaughn Gittin Jr- Drift star got hooked on Ultra4 racing two years ago, last year he debuted an IFS Early Bronco that succumbed to new car blues, but is back this year with all the bugs worked out.
Matt Howell- Current 4500 class champion.
Bryan Crofts- Purchased Mitch Funk’s Willys buggy, has shown speed at 2017 events, first time driving in KOH.
John Grounds- Works for Poison Spyder Customs during the week, and tests their products on the lakebed, one to watch after his impressive first season.
Sean Rants- 2017 Sportsman of the year, epitomizes what Ultra4 racing is all about, always willing to lend a helping hand, has raced in every EMC since its inception.
Mad Mike Bedwell- Old Guys racing, finished 3rd in 4500 at KOH in 2017.
Cora Jokinen- Racing her Jeep in 4600, Cora co-founded Torq-Lockers with husband Eric.
Sarah Amaral- After navigating for her husband Mike for two years, now Sarah is behind the wheel.

Friday, February 9th- Nitto King of the Hammers Powered By Optima Batteries
Friday is the big show, when the unlimited class competitors battle to be named King. Your best bet at following the action is at Backdoor, Chocolate Thunder, or the new spectator area at Cougar Buttes. More interested in watching from the comfort of your camp chair? Hammertown will have a Jumbotron with live cameras and announcers calling all the action. Teams also pit in Hammertown and carve their way through the infield short course, bringing the action right to the fans.

Four racers have won KOH the past eight years, demonstrating that it takes a lot more than luck to be on the top step. Will one of them win again this year, or will a new King ascend to the throne?