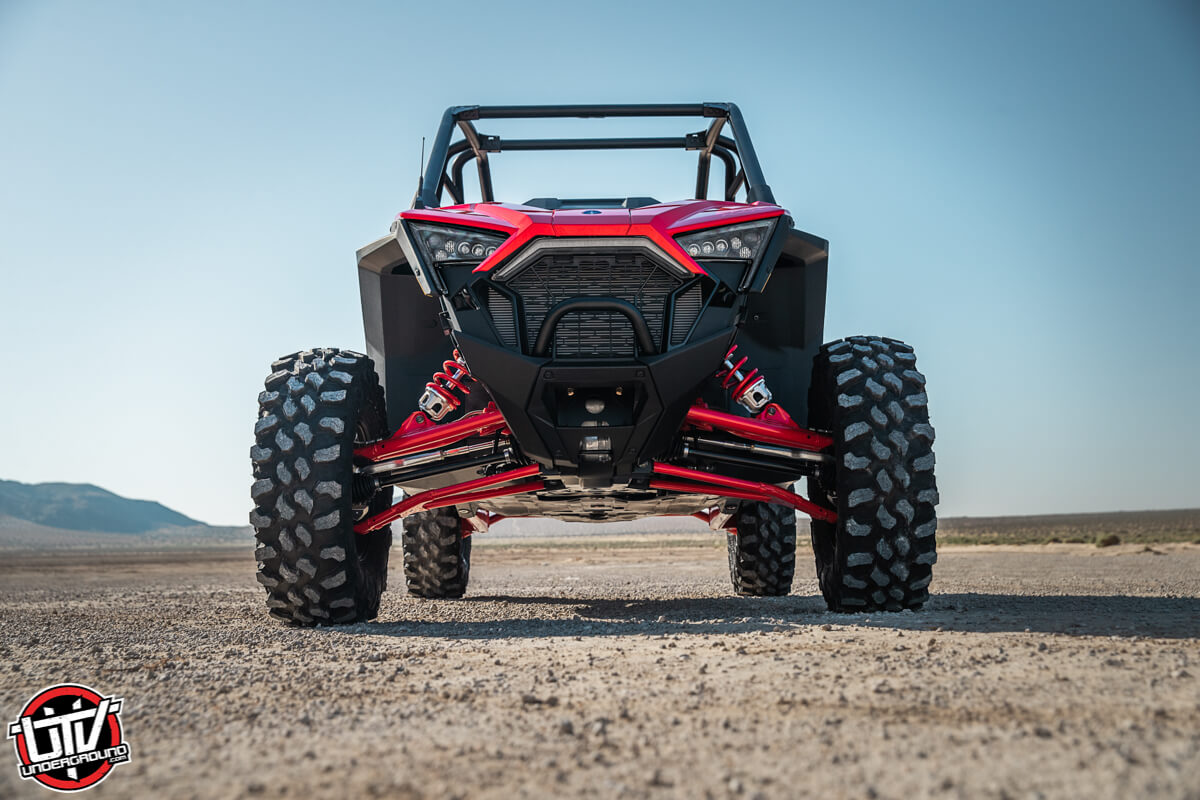 The ongoing battle for supremacy in the Sport UTV market is getting crazier by the day – and Polaris just dropped another bomb on the industry. Here’s the quick rundown for those of you in a hurry to share the news. The new RZR Pro XP is a 64” machine that is part of an all-new PRO line. So this is not a new Turbo S. This machine is a significant evolutionary step up – so it’s getting its own top tier category. It’s lighter, more powerful (181 horsepower), has a bigger gas tank, sits on 30” tires and V2 of the Dynamix shocks – giving it a full 20” – 22” of usable travel. And it has some much-needed refinements to steering and seating. It’s got a massive alternator that puts out enough power to run any of the new Rockford Fosgate Stereo packages or integrated RIGID lighting products, as well as room for a second battery under the driver’s seat. It cools itself off better, even with the power turned off, and the roll cage looks like something from the aftermarket – safe, sleek and extremely well built. The Pro XP is available in three trim levels – RZR Pro XP, RZR Pro XP Premium and RZR Pro XP Ultimate. Pricing for the RZR Pro XP starts at $22,999, while the RZR Pro XP Premium begins at $24,499 and the RZR Pro XP Ultimate at $28,499. The RZR Pro XP Premium and RZR Pro XP Ultimate are available now, while the RZR Pro XP will be available in January 2020. That pricing is well-matched in terms of value for any of the competitors out there. In short – it’s the best RZR in history and it’s going to crush it.

Is there a belt? Yes. A better belt. A belt that lasts twice as long as the current model. Polaris hasn’t cut the CVT tie just yet – so those of us who have grown accustomed to the occasional belt change won’t see that go away soon. So why 64”? Because the vast majority of folks driving Sport UTV’s are doing so on trails with limited space. We’re a little bit spoiled out West with our wide-open deserts and dunes. Will this line expand eventually into a 72” Pro model? Likely. Polaris has always been great at responding to market pressure and giving its loyal owner base more for their money, and that’s clearly what is happening here again. Can you adjust the suspension electronically on the steering wheel with the push of a button? Yes. That’s huge for adjusting the ride in real-time. And the new active all-wheel-drive system is much more than just four tires turning at the same time. There’s some serious mathematical engineering genius at play there.

At the recent RZR Pro XP press event, the media were treated to a ride with Polaris Factory short course racers Cody Bradbury and Ronnie Anderson at Speed Vegas on the off-road short course track. (Whenever you get in a machine with either of these dudes it’s wise to buckle up TIGHT.) The new “Oh Shit” handle immediately became our best friend when Cody began launching this new machine into the outer atmosphere. It was impressive as hell. Loads of power in the whoops and step-ups, he was able to put the tires exactly where he wanted it. The new RZR Pro XP felt balanced and nimble and we never felt like we were near tipping. Short course test – CHECK. 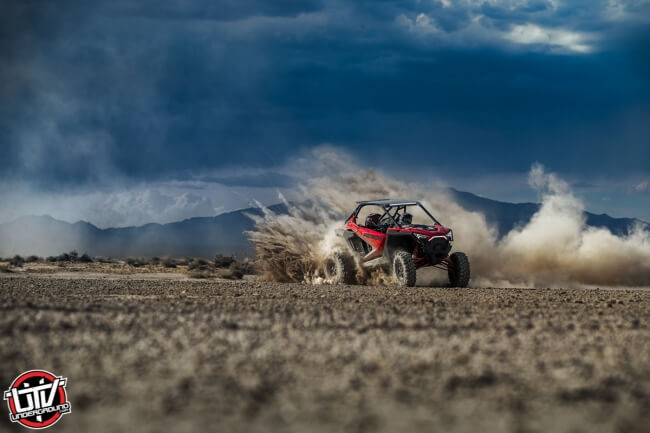 Next up was the dessert test section and the boys at Zero1offroad.com put together a great test course. (If you’re ever in Vegas and want to rent UTVs call Earl at Zero 1. They’re the best in the business.) We each took turns slamming the new Pro RZR XP through nasty rock, silty ruts, and across open patches of windy scorching dirt. Verdict? Fun as shit. No really, technically this machine is fun as shit. The raw power is crazy, and more importantly, we felt safe at speeds we would not normally drive at. The braking is great. The clutching is smooth. We bottomed the machine out a few times but to be fair to Polaris we were on extremely rough terrain and some shock tuning and larger tires would have probably eliminated that.

So where does the new Pro RZR XP stack up against the competition? STAY TUNED. We’ll be putting this machine and it’s direct competition to the test this fall and will report back. Congrats to the men and women in Minnesota in the meantime though. The ante has been officially upped!