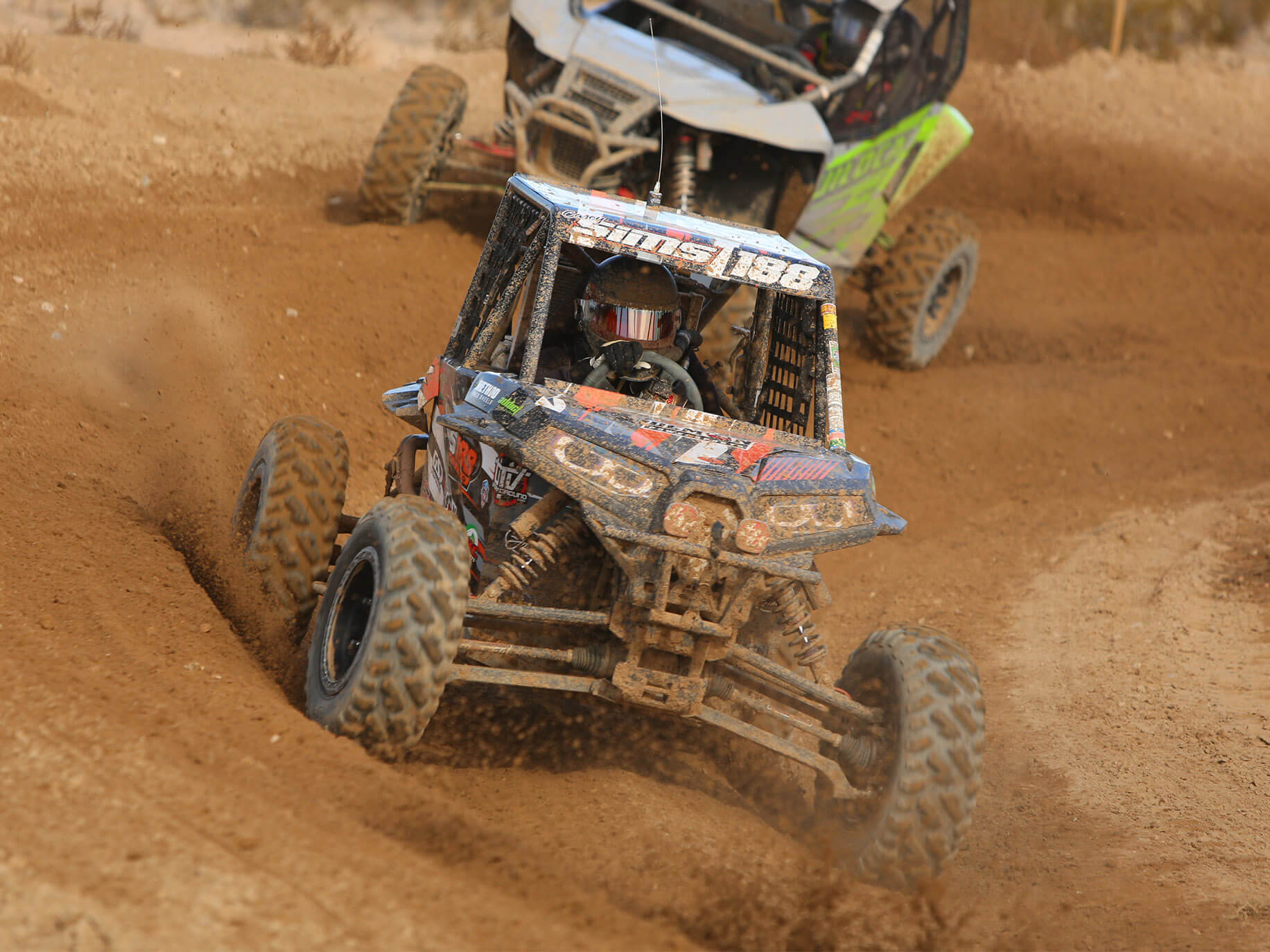 Casey Sims had a strong year at the WORCS series taking the 2018 WORCS Championship Title. Here’s the report we got from him from the final round of the series.

The 2018 WORCS season is complete and I am stoked I was able to put my RZR 800 on top of the box! We headed to Primm on Thursday night so I could be at qualifying on Friday. On Friday morning, we unloaded my car and changed the tires so I could head to qualifying. WORCS put on a double header event for the final round of the season. We would race short course on the Lucas Oil track first and then race the standard WORCS desert race in the afternoon. To make the stakes even higher, those of us that did not get to race at Round 8 in Mesquite, NV due to the race being cancelled would be racing for double points during the short course portion of the day. We ran three laps in qualifying and I gave it everything I had to get myself a good starting position the next day. When they posted the results, I had qualified 1st! I knew I was going to have my work cut out for me on Saturday, as the top three in my class were all within hundredths of a second on lap times. 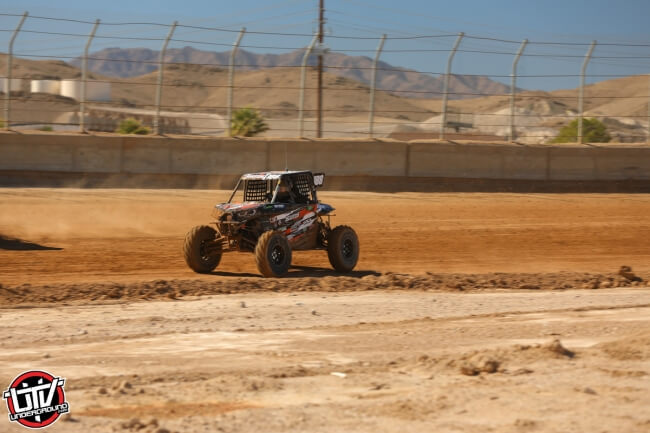 On Saturday we headed to line up and I was in the pole position for the rolling start. We followed the pace motorcycle around the track once and then it was go time. The flag waved and I took off! I was passed going into the first corner, but I stayed on it and in lap 2, I was able to pass and take over the lead. Second and third place stayed on my bumper with the rest of the pack behind them for the 6 lap race. In the end, I crossed the finish line in 1st place and was stoked! This race counted for double points and the series championship was on the line. The win helped to set me up for a little less stress going into the desert race that afternoon; however, I still had to finish the desert race to secure the 2018 series championship. 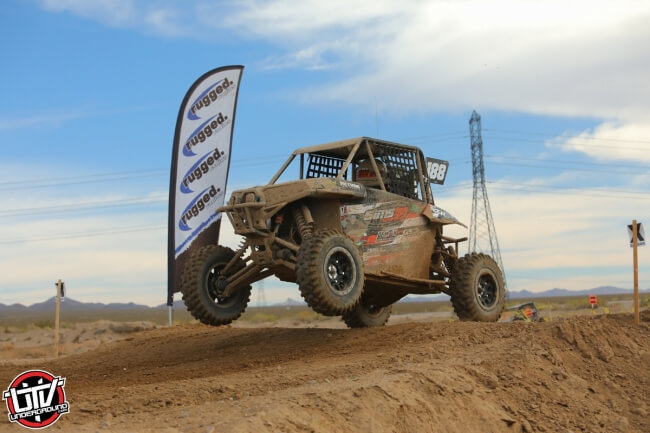 We headed back to the pit and cleaned my car up as best we could. We changed the tires and fueled up for the desert race. Later that afternoon, it was my classes turn to line up again. This time, we lined up and waited for the green flag to drop. We took off and I was neck-in-neck with one of my competitors for the hole shot. As we made it to the first corner, he was able to slip in front of me and I fell into second place. I stayed on his bumper and it wasn’t long before I was able to make a pass moving into the 1st place position. I hit the gas and took off on the 6 mile race course. Second and third place stayed close to me for the first two laps, and then I was able to make a pass on a slower car not in my class, and they got stuck behind. This gave me a chance to increase my lead and gave me a little cushion. As I was making my way through lap 3, I realized that my throttle had stuck. I radioed to my pit crew that it was stuck and they told me to tap the gas pedal a few times to try and fix it. I tried, but it wouldn’t budge. I was going to have to drive the rest of the race with my throttle stuck and try not to blow up my motor in the process. I thought quickly and began turning my car off in the corners to slow down and then I would turn in back on as I made my way out of the corners to get going again. I also knew I had to use my brakes as little as possible so I didn’t burn them up. I had to finish the race to win the championship, so I did everything I could to save my car and keep it going. I hit the first jump with my throttle stuck and as I landed, I destroyed my 4-wheel drive causing me to drive the last two and a half laps in 2-wheel drive. I was determined to finish the race. Because of the way I was having to drive, I had slowed down and 2nd place caught me going into our last lap. I was trying to make my way around a corner and he was able to get by me as I turned my car off and tried to control it. I turned my car back on, my motor revved up again, and I took off after him.
I had led the whole race and was determined to try to get my lead back. As we raced through the desert, I realized that saving my car and getting it across the finish line needed to be my priority, so I concentrated on keeping my car together. As the race came to an end, I crossed the finish line in 2nd place and that was more than enough to win the 2018 WORCS Championship title! My car was in sad shape, but I was proud that I was able to keep it together and take the checked flag. 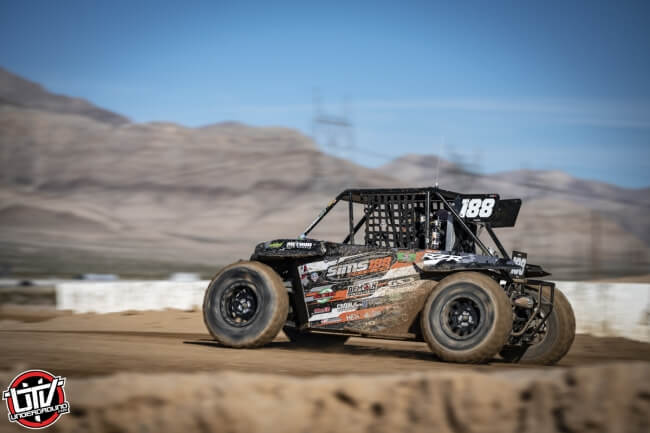 We’re busy this week prepping my RZR 1000 to race this weekend at the Lake Elsinore Grand Prix. It the 50th anniversary of the Grand Prix and I am looking forward to being part of the fun event!

Thanks so much to all of these amazing companies and people that support my program: Got Sand Performance, Addict Racing Engines, Demon Powersports, Method Race Wheels, GBC Motorsports, Crow Enterprizes, Factory UTV, Baja Designs, Bikeman Performance, Gates G- Force, RT Pro, Rugged Radios, Maxima Racing Oils, Crown Performance Products, Elka Suspension, Surface Sun Systems, Butter Supply Co, HOK9, Pavement Recycling Systems, Perrault Motorsports, Sign Art Graphix, UTV Underground, Grounded 4, Dirt Rider Designs, and my parents who make this possible for me! Thanks to WORCS for putting on the event and the series this year, and thanks to Harlen Foley and Ely Hernandez for the awesome pictures! You can check out the Sims188 Racing team on Instagram @csims188 or on Facebook at www.facebook.com/csims188/.