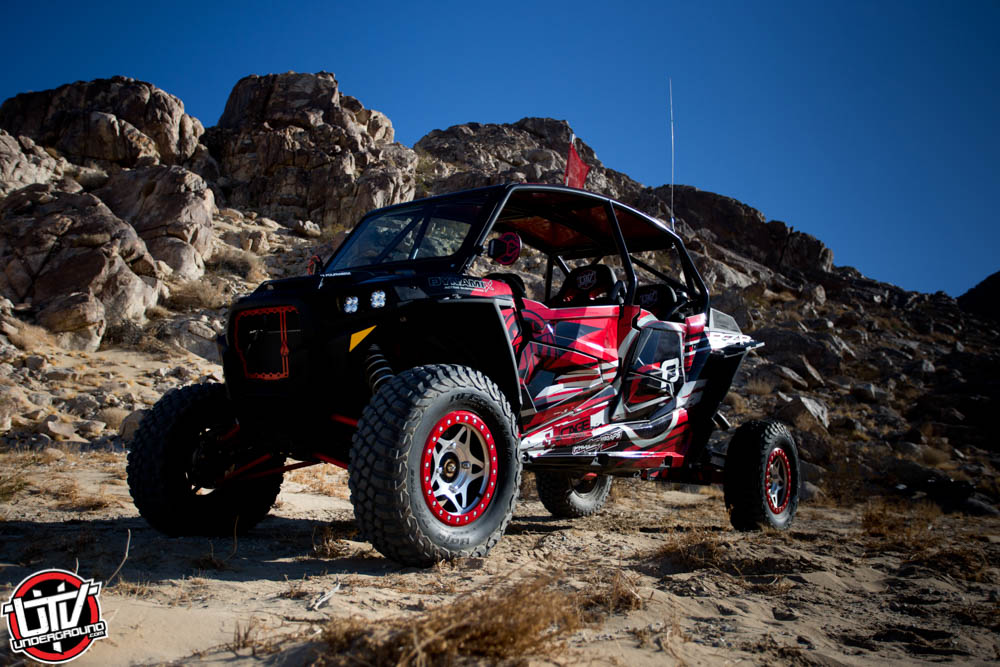 I take special interest in all of the custom builds we do here at UTVUnderground.com. Each one has a different flavor and while many may share similar parts, brands or accessories, each one has its own unique style and look. This build may have a simple exterior appearance, but it has one of the most significant meanings of any build I have ever done or been a part of. 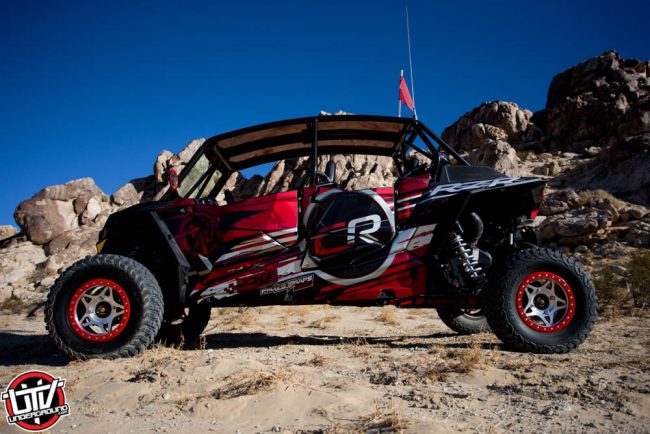 When I first started planning the build of our new 2018 Polaris RZR XP4 Dynamix edition, I had a rather basic strategy. I wanted it to be more of a desert based vehicle that I could use both for fun family trail rides & more hardcore Baja style pre-runs. While the overall concept remained the same and even came out better than I had intended, the meaning of the build took on something new midway through.

The build started with a call to my friend Chad Ragland, one of the owners of CAGEwrx. Chad and I had a great history together of building some fun RZRs including a race RZR we campaigned for a couple of years before he was diagnosed with Cancer. Chad and I started this build like many others before, simply deciding which CageWRX parts were needed for this machine. He got together an order for one of my favorite cages on the market, their 4-seat RZR “Race Cage”. I had a windshield from a previous build, one of only two ever made, that I had saved and wanted to use on this build. The order was placed and I went on to begin ordering all the other parts needed. 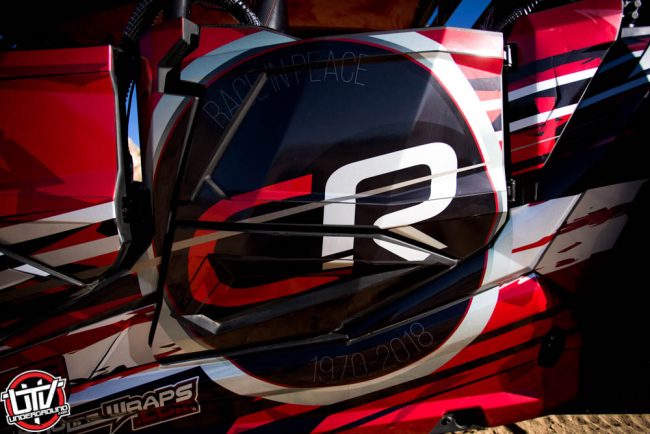 Just as I was in the process of finishing up install of the cage and diving into the rest of the build was when Chad’s health took a turn for the worse which resulted in his passing away at the age of 47 years old. It was a tough moment in time for those of us close to Chad, and the tough thought of him not being here will forever live on for his family, wife and two young sons barely old enough to likely maintain the memories they were able to forge while he was here and in good health. I summed Chad and mines relationship up in a tribute piece on UTVUnderground that I hope all of you will read. CLICK HERE

The last conversation Chad and I would share would surround this build and so naturally as I tried to make sense of losing a friend whom I admired so much, I turned to the build as a way of coping with the loss. Piecing this RZR together became my therapy and for weeks I would spend my evenings in my garage tinkering and installing parts and accessories from some really amazing companies. Each night taking a step back to see what I had done and thinking about my friend in the process. 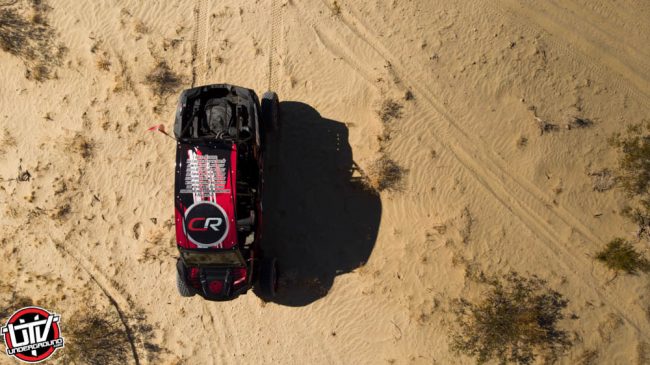 While I performed a large majority of the work myself, I did turn to my friends at the Powersports Kings for some specific duties such as cutting in and mounting switches in the really nice carbon fiber Ride Command dash made by FourWerx. In addition, they helped with some basic wiring which I am not always very excited to do myself. They were great in the work they assisted in and got it done really quick for me.

I also leaned on ProLine Wraps to help me honor Chad by designing a custom wrap that featured his logo and a special Bible verse on the roof of the vehicle that Chad had shared with another of our friends during his battle with Cancer. Our friends at Sign-Art in Vista, CA completed the graphic install. 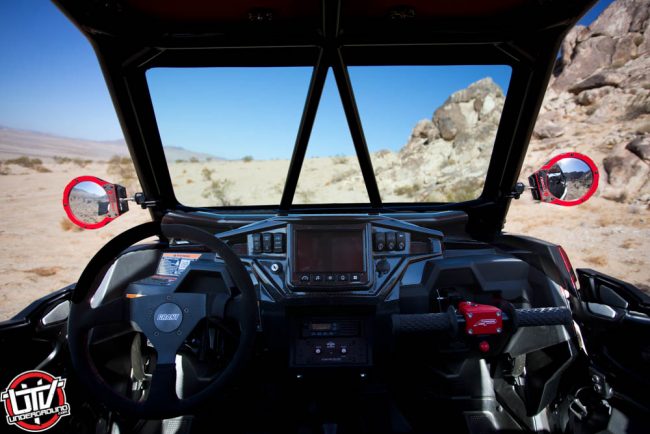 What makes this build special is its simplicity in appearance yet it has some very detailed and clean accessories that make it stand out. One of the most commented on was the amazing Triple-X seats made custom for the car and feature a beautiful combination of materials including suede and our detailed UTVUnderground.com logo in the headrest. New Grant Products harnesses are used to keep us held in tight in addition to the Grant suede steering wheel and billet disconnect.

I used a lot of nice carbon fiber pieces on this build including a limited carbon fiber windshield designed by Chad and the team at CAGEwrx. This piece was originally used on a similar build I had that was stolen. While much of the car was damaged upon recovery, the windshield was in tact and damage free. I did have Allen at Allen’s Auto Glass in Hemet, CA replace the windshield with new glass and the guys at CAGEwrx upon Chad’s request were able to tab the new cage up so that it fit nice and tight. FourWerx supplied their carbon fiber hood which we use on almost all of our builds. Its lightweight, durable and looks and fits amazing. We also ran their direct carbon fiber Ride Command replacement dash which also saves weight and gives the interior a custom look. Lastly, we installed a carbon fiber rear exhaust cover made by Agency Power which is another detailed part that grabs people’s attention often. 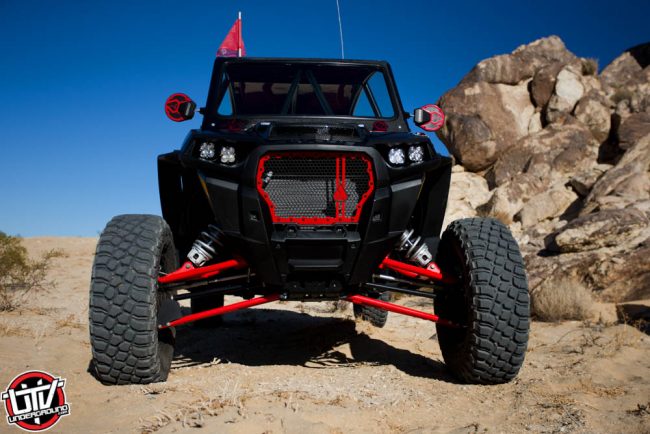 I went easy on the lighting but did do some things to make sure the vehicle had what it needed in the dark. Baja Designs is a leader in lighting technology and our history with them dates back to our very first custom build in 2008. We ran with their stock replacement headlight kit that removes the factory headlights and replaces them with power spot & flood combo Squadron lights. The kit works on the factory low & high beam switch and produces an amazing amount of light. I opted to not run a front bumper and lighting package to maximize airflow but a couple Squadron XL’s on the front bumper would have been a nice addition. Out back I ran the Baja Designs rear RTL light bar which has a tremendous amount of light used for running lights, tail lights and even a bright cargo light which can double as a reverse light. I completed the lighting package with the very clean Baja Designs interior dome light that really illuminates the entire interior.

Communications was handled with PCI Race Radios 50w iCom radio & 4-place intercom system. We used their supplied mounting bracket which allows for clean mounting in the doubled-in storage box location just above the center console. I ran the wiring myself and literally isolated every cable to ensure no interference of any kind. The coms work perfectly and after 1000 miles in Baja I can say that its one of the best communications set ups I have ever installed and used. Its been flawless! I also installed a 4-person PCI Race Air helmet system mounted to the rear cross tube of the cage via PCI’s billet Race Air mount. The guys at Powersports Kings helped me route the houses for the driver and front passenger through the center tunnel providing for a clean look and limiting clutter with the hoses and coms cables. 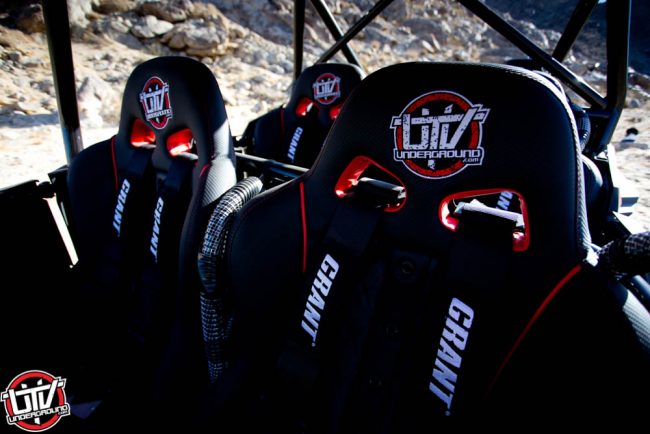 Accessories such as Assault Industries front grill which really maximizes air flow and adds to the custom look of the machine was installed as well as their round convex side view mirrors. I also used the Assault radius rods just to add durability to an already well performing Dynamix suspension. I also used the Assault Industries RZR trailing arm guards to better protect them should I get into some rock crawling situations.

I have put over 1000 miles on this machine since the photos below were taken, all of those miles being south of the border in Baja. The machine has performed as expected and I couldn’t be more happy with it. I maintain it as best I can and each time I drive it I am reminded of a great friend. The Polaris Dynamix suspension works great and I use the active suspension switch often depending on the terrain I am in. The machine runs cool even when being pushed in sand and I have yet to lose a belt despite having upgraded to 32″ tall tires now. I do need to do some clutch work to compensate for the change but as long as I avoid a hard punch of the throttle, the machine performs as good as one would want. 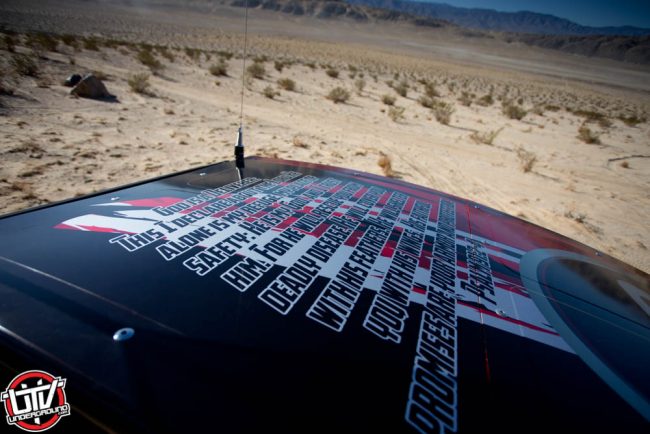 Overall its a comfortable and functional build, not much disco but rather geared purely towards form and function. Each part installed has added to the functionality of the vehicle making it either better or easier to use. It has quickly become my go-to machine for riding and I even modified it to eliminate the rear seats in place of a rear storage rack when I go to Baja and pre-run. The RZR XP4 is one of the most versatile UTVs on the market and this model is by far the best four-seat machine Polaris has ever produced!

I know Chad would be proud of how this machine turned out. I sure do wish he was here to enjoy it with me, but I know each time I am behind the wheel he riding with me everywhere I go. I’m not sure what I will end up doing with this vehicle in the long run, but for now I am happy walking into my shop and just looking at it to remind me of a great friend who I shared so many great off-road adventures with.

Godspeed Chad Ragland, we miss you…… 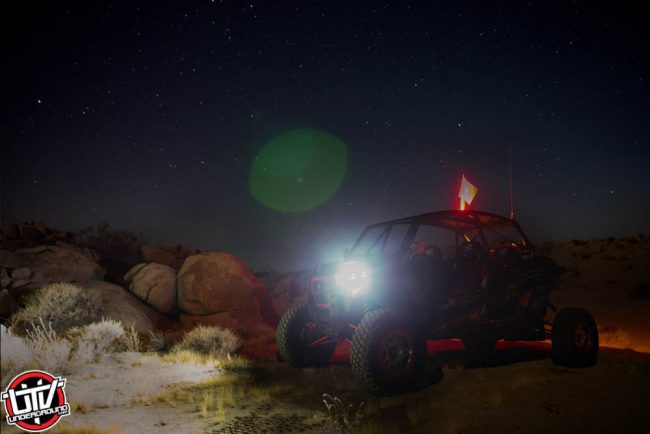