To celebrate the 20th Anniversary of the longest off-road race in America, Best In The Desert decided to make it the toughest race in America, too! The General Tire Vegas to Reno “The Long Way,” Presented by Fox also featured a unique split into two days and featured nearly 350 entries. Technically the starting line was at the Delamar airstrip just east of Alamo, Nevada rather than Las Vegas, but you get the idea.

Day #1 was a 296 mile dash to the finish in Tonopah… or was supposed to be. A military helicopter crashed on the course on a night training mission (resulting in four non-life-threatening injuries, but fortunately no fatalities), hours before the 5:45 A.M. start on Friday. The crash area was declared off limits by the military, which left Best In The Desert scrambling and delayed the start somewhat.

Casey Folks and the BITD crew scrambled and came up with Plan B: when the racers reached Pit #1, they clocked in and then had to load up the race vehicles and take them down the highway to Pit #2. This resulted in the race being able to continue around the off-limits area, but resulted in some confusion and timing issues.

But at least the race went on. “We were lucky enough to begin this race in the top 10 after a 3rd place finish at the Laughlin Desert Classic,” says last year's V2R winner, Lacrecia Beurrier. “There were approximately 60 UTVs behind us at the starting line with two full days and 648 miles of the toughest desert Nevada has to offer in front off us!” Talk about a rock and a hard place, however the Rockstar Racing/DragonFire team had a game plan.

“Our plan was to put as much time between us and all 60 of the other UTVs as we possibly could,” she says. “We had heard from BITD that there was a pile up at approximately Race Mile 7 in a huge silt bed, so we were on the lookout.” Despite the best laid plans and keeping a wary eye on the course, silt happens!

“The track started off with deep silt and we knew we had to keep our guard up. Luck would have it that we were able to see as the first stuck vehicles. There were cars and trucks stuck everywhere! We had to keep moving to avoid getting stuck ourselves and frantically searching for a way around the chaos. Off to the right we saw a racer waving us over and pointing to a clear spot in the track.” Thanks to their dusty benefactor, the Pink Polaris RZR was able to skirt the pile up and headed off to Pit #1 with no one in sight.

“Due to the helicopter accident, we were instructed to load the cars at Pit #1 and trailer to Pit #2. We hit Pit #1 in the top 5 of all the UTVs," says Lacrecria. “My team unloaded, fueled and sent us back out still in the top 5.” As the team plowed through 200 miles of pure silt, belt temps began reaching 240-degrees, overheating the CVs and melting the occupants inside the race car. “Luckily a couple of water crossings gave us a bit of a cool down. We crossed the finish line on Day 1 6th overall UTV and 3rd Pro Production UTV.”

At a “normal” desert race the day would have been done and the team would have had a podium finish. Not so with the longest race in America! “We had to totally re-prep the car and get ready for an even longer day in the morning. My crew made short work of getting us ready and our camp chef, Joe Weber, made sure we all had full bellies with elk tacos and brats.”

Another twist for Day 2 was that all vehicles started in order of finish… that meant Trophy Trucks, buggies and UTVs were all mixed up. “This time, not only were we in the top 10 of the UTVs, we were running in the top 65 of all the cars and trucks! Our DragonFire Racing teammate Russell Griffin just beat us on time on Day 1, so we started right behind him. Although we always wish our teammates well, we didn't want to be eating Russell's dust all day.”

There was no wind at the start and the dust was thick as the #1970 RZR of Griffin took off. One minute later the #1924 Rockstar RZR headed out after the KeysCrete car. “We passed them quickly and tried to get some time between us. The track was pretty smooth and fast! Lots of mountain trails and powerline roads. We missed a couple of corners in the dust and spun out once, costing us some time.” Still, things were going well enough that the team decided to spell Lacrecia and her co-driver at Race Mile 100 for a one pit, 50-mile break to keep them fresh for the long run to the finish… so much for sticking to the plan.

“Just before we hit the pit, a belt let go. As we struggled with a hot clutch and a bent clutch tool, we lost a couple of spots, including the #1970 of Griffin! We put the belt back on and blazed to the pit where my relief driver Brian Thomas and Miss DragonFire Emily climbed in for a 50-mile ride.” Brian chased the Keyscrete car, but to not avail, then came some more drama.

The driver change at the next pit became a challenge as the seat jammed and would not slide forward. “Thanks to Mike Colosimo for the pillow! Unfortunately, the long driver change let the #1970 and a couple of other UTVs in our class get some more time on us! We knew we had to charge to the finish with only 150 miles left to go.” However she may have charged too hard.

“We pushed so hard that the chase team was unable to beat us to the next pit where we were supposed to get fuel. We headed to the next pit on fumes facing another 40 miles to the finish and still no team!” Unbeknownst to Lacrecia, the chase truck had stopped to help another chase vehicle stuck on the side of the road, and then became stuck themselves.”

The crew knew how low Lacrecia was on fuel and frantically called everyone they could. They finally found the Can-Am Team of Murray Racing who was able to help at the last pit. “They splashed us enough fuel to us home! We caught the #1970 on a sandy powerline road and just as we were about to pass, silt happened! It was lights out for us! It gave Griffin just enough time to get away again and we were unable to catch him.”

When the silt finally settled, Lacrecia crossed the finish line unofficially 6th in class and 65th out 342 entries. Not bad for a girl in a Polaris RZR! “It was two solid days of tough racing! I can’t thank my team and my sponsors enough for giving us the opportunity to race such an epic race! Happy 20 Year Anniversary Vegas to Reno! We had a great time!

Special thanks to Mike Colosimo of STV Motorsports and Murray Racing for helping us get to the finish line! Also Miss DragonFire for keeping you all updated with amazing photos and results and for jumping in the race car last minute! She may have a future in that right seat!”

Got a couple shots of you guys from the Helo on Saturday. 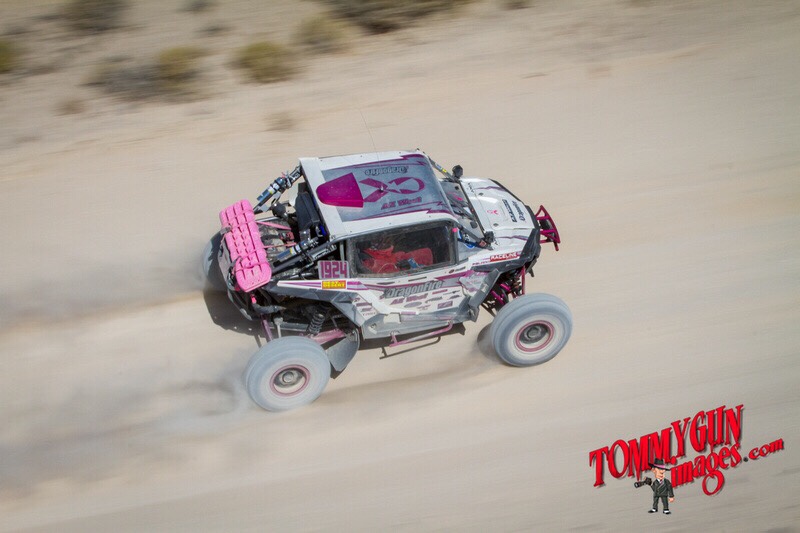 That is a rad shot! Love all this V2R coverage!