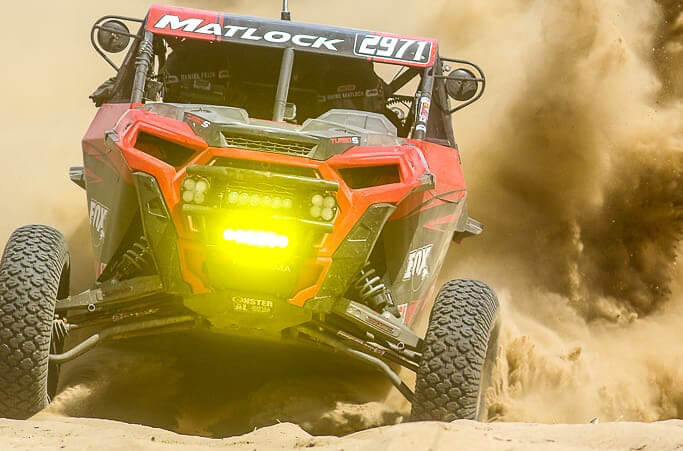 Wayne and Kristen Matlock claimed the Pro UTV Forced Induction and Normally Aspirated victories, respectively, from the SCORE World Desert Championship season-opening San Felipe 250 on Saturday. It marked the second year in a row that the Matlocks swept their respective classes in San Felipe, as well as Wayne Matlock’s third straight year atop the UTV FI standings.

“That was a rough SOB,” Wayne Matlock told SCORE after the finish. “We got our money’s worth out of that course. That was tough. I say it every year, but that was one of the toughest courses. I shouldn’t say one, that was THE toughest course I’ve ever done. I mean the SCORE Baja 500 is nothing compared to that. That was brutal. The rocks. My hands and wrists are aching. I haven’t been sore from a race in a long time. We pre-ran for about four days. We can’t say enough about the Polaris RZR. We got passed but then I put it in 4-wheel drive and passed him back and never saw him again.”

“At race mile 108 we lost power steering and it never came back,” added Kristen Matlock. “Almost 250 miles with no power steering today.  That was crazy. My hands will never be the same. We earned our champagne today. We purposely start last because we like to know where we are at at all times. That way as we pass people as long as we are in front of them we know we are winning. Takes the guess work out of it. Our crew has so much to do already, it’s something that we can take away from them so that we don’t have to think about that too. They can just check out our car and put gas in it and go.”

After becoming the first UTV racer in SCORE history to win the overall World Desert Championship last year, Wayne Matlock kicked off his title defense by winning in San Felipe by over 25 minutes over Mike Cafro. Marc Burnett completed the Pro UTV FI podium, with Patrick Stone just over a minute behind Burnett for the third spot and Edgar Garcia in fifth. Each of the top five finishers drove solo except for Cafro, who split time with Jamie Kirkpatrick.

Travis Wells was the only other Pro UTV NA finisher behind Kristen Matlock, finishing 50 minutes off the winning pace. In Pro UTV Unlimited, Josh Herzing took the class victory to complete a sweep for Polaris RZRs, while Jesus Mendez was the only other finisher. 11 of the 30 UTV entrants who started the event did not make it to the finish.

Official finishers of the 33rd SCORE San Felipe 250 were as follows:

The 2019 SCORE World Desert Championship resumes on May 29-June 2 with the 51st SCORE Baja 500. The 33rd SCORE San Felipe 250 can be seen on television later this year as part of ABC’s World of X Games series.