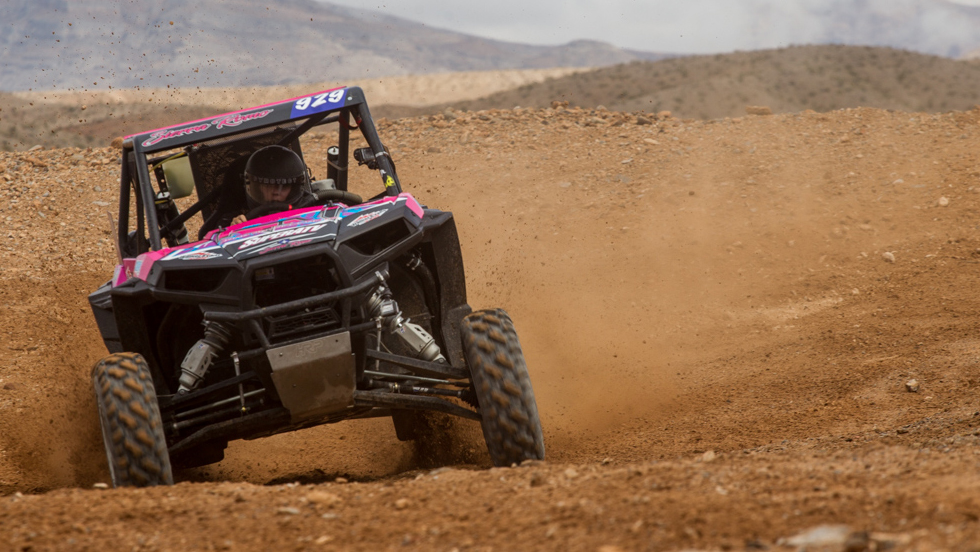 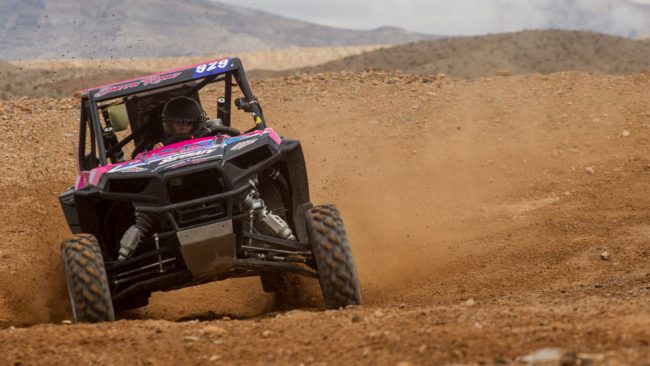 Romo Motorsports, Kicking Off 2018 In a Major Way

Romo Motorsports is going all out in 2018! The family race team made its mark at the WORCS racing series the past couple of seasons with Father, Mother and Daughter all piloting their own Polaris RZRs. Their hard work, friendly demeanor and talent did not go unnoticed. Heading into 2018 Romo Motorsports will roll into the year carrying the Factory Polaris RZR logo on their machines and they aren’t just racing WORCS. Team owner and leader of the pack, Randy Romo will race alongside his very fast and talented daughter Sierra in a brand new Holz Racing Products built RZR XP4 Turbo at the Best In The Desert series.

The team will continue to race the full WORCS series in addition to their new desert racing commitment and look to not only perform at the highest level but also continue to push the young and fast Sierra to new levels.

We are looking forward to just how far the team can go in 2018 after getting off to a hot start at the opening round of BITD racing in Parker. Below is a team report and an official PR. In addition, we thought we would share the entire 2017 UTV World Championship TV show where we featured the Romo’s as part of the show! 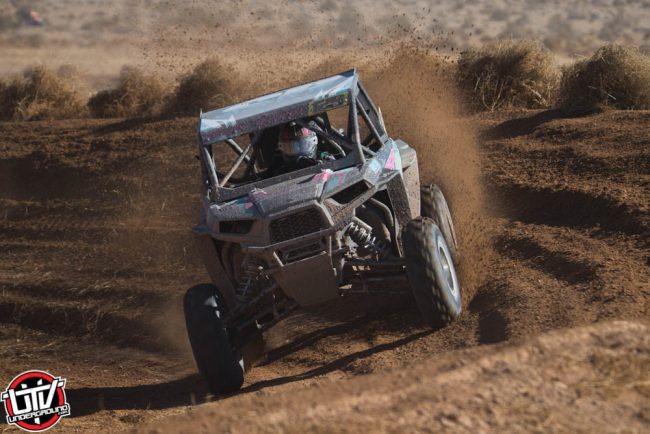 Friday January 5th 2018 – Randy Romo would kick the Best In The Desert (BITD) UTV Winter Nationals weekend off by dominating the PRO Turbo class in the Production race. Carrying pressure to redeem himself after breaking a part with no spare to salvage a finish in the final race of the season, he knew the hole shot at the Winter Nationals was crucial because of the dust Parker is known for. Coming from the far-right side and with a dead engine start, the hole shot would not be easy.

The flag dropped and Romo’s Factory Polaris RZR XP Turbo immediately came to life. After a close fight to the first corner, Randy claimed the hole shot and never looked back! By the first lap he had put a minute and a half lead on the rest of the pack. All he had to do was keep the car together and run a smooth pace and thats exactly what he did. He cruised to the finish with over a six minute lead claiming the UTV Winter National Pro Turbo class win.

Sierra Romo entered the PRO Production (naturally aspirated) class in her 2018 Holz Racing Products built center seat Polaris RZR XP1000. The brand-new Polaris RZR had just arrived 2 weeks before the race leaving little time for build and test time. Mark Holz sent the team a one of a kind center seat kit which the team worked feverishly to put together a week before the race. A podium would be difficult based on dust and the level of competition but Sierra is always up for the challenge.

Sierra lost precious time when she stomped the pedal and didn’t move, she fired her RZR again and began to chase the pack. Instantly the Parker dust overwhelmed the course. She worked fast to find her groove and started making passes. By lap two she had made her way into third place physical. Romo pushed her stock powered RZR to the limit amongst a field of well built and seasoned machines and was able to claim a 3rd place finish in class.

With production racing out of the way, it was time to prepare for Saturday’s main BITD Parker 250 desert race event. The Romo Motorsports team arrived in Parker, AZ with a fresh Holz Racing Products built Poalris RZR XP4 desert racing machine that was tested, tuned and ready for battle. The car was built and finished in late 2017 but the team made time to enter the machine at the final rounds of BITD and SNORE to use the races as proper live testing to ensure come January at Parker their race vehicle was ready. The team managed a respectable 12th place finish at the BITD Pahrump 250. The weekend after, they entered the SNORE Rage at the River and came away with a solid 2nd and a lot more understanding of their new advanced racing equipment.

Still with little seat time in the car, 17 year old Sierra Romo lined the car up in the 44th start position in the Pro Turbo UTV class and was instantly surrounded by men and women with far more experience. Confident in her skills and race vehicle, she knew the race was more about safely picking her way through the dust and sure to be carnage to safely finish the race. A finish at Parker when starting that late in the field is a great accomplishment when thinking of a season points championship.

Sierra set a goal of running a conservative pace, gain a feel for the machine and course and make it to the finish. Not even a mile from the start Sierra began to already pass broken racers. Within the first 3 miles the #974 Romo Motorsports RZR had motored past two more competitors. The GBC Terra Master tires traversed the sand with ease. Half way through the first lap and with dust at its worst Co-Pilot Jared Blitz began to experience motion sickness teaching the co-driver that chorizo burritos before a desert race are never a good thing! With the stench of vomit, blinding dust and violent terrain, Sierra was determined to finish strong and finish quickly.

On lap two they stopped at the “Midway” pit for fuel and a quick visual. While the inside of the machine looked like a scene from a horror movie, the mechanical aspect of the RZR was holding together flawlessly and she knew she could begin to push the RZR. The braking bumps had begun to wear into the course on the second lap making an already rough course even more harsh. The team is running the all-new 3.0 Walker Evans Racing Velocity Series shocks and thankfully they were as they soaked up the rough terrain while Sierra pushed into the top 20 on time. This was the third race on the same set of 2.0 SuperATV Rhino Axles, they were proving to be up for the challenge of charging hard.

As the sun began to set, the blinding dust settled as well, with zero wind in sight. With close to zero visibility following and closely tailing two other race vehicles, Sierra struck a massive rock and she thought her race was over. The co-driver quickly jumped out and saw that her Walker Evans Racing forged wheel had held up to the boulder but unfortunately the tire did not survive. Jared quickly performed a tire change and they were back on course in less than two minutes. They pulled into main pit for a fresh spare tire in the rack and with their Pro Eagle jack quickly jacked up the car and looked for anything else that could have been damaged by the impact with the rock. The RZR looked flawless and so they set back off into the desert for the final lap and begun passing many more competitors. Romo was able to pick up the pace and push the car to a 12th place finish.

Sierra would pass a total of 32 competitors on her way to a finish just outside of the top 10, not a bad way to kick off the 2018 season.

The team is looking forward to a strong rookie year in BITD and expressed their appreciation for their hard working team, family and group of quality sponsors. 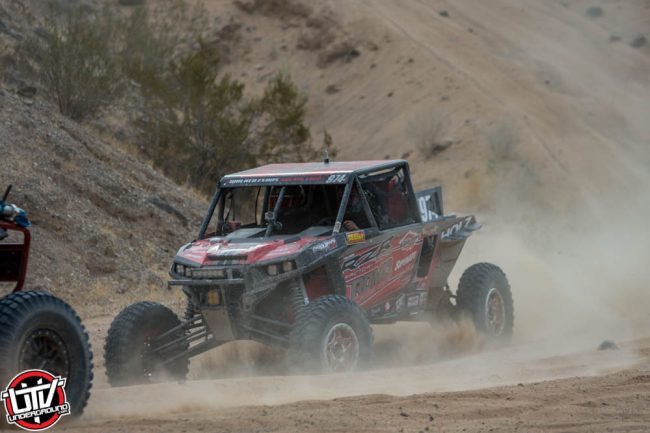 “It was a good day,” said Randy Romo. “It was a struggle last season with these brand new turbos. We had trouble trying to help them stay cool and keeping the belts alive, but I really think we have a good handle on it now. It was an hour-long race, we had no belt issues. We have this turbo figured out and I’m looking forward to a dominant run this season.”

Sierra Romo turned a slow start into a podium in the Production class short course event. Driving a one-of-a-kind Holz-built center seat Polaris RZR, she was quickly up to speed and motoring through the field on the first lap despite not having driven the car prior to the event.

“I had zero time in testing and the car only had 12 miles on it at the start line,” said Sierra Romo. “The start was difficult because I got left thinking my car was running and it wasn’t. On the straightaway I was instantly passing people. My GBC Tires hooked up great. I noticed how well the suspension worked on some really harsh whoops. To get a podium in the first race with no testing, no tuning, and no clutching is pretty impressive.”

In the desert race, Sierra Romo started 44th and turned that into a 12th-place finish in a new Holz-built Polaris RZR Turbo. Running with co-driver Jared Blitz, she fought the dust and rough conditions to put in an expert run.

“It was brutal and it was dusty,” said Sierra Romo. “On a straightaway, we passed two people within the first mile. We got the new Terra Masters from GBC and we were just blowing past people. I didn’t realize how much power the turbo had and I was just motoring past the other cars. I’m excited for the Mint 400. I’m co-driving with my dad there. I’m very impressed with how the car ran and I can’t wait to run it again.”

The Romos will be back in action as the WORCS Racing Series kicks off its 2018 season at the Orleans Arena in Las Vegas. That race is scheduled for February 2-4.