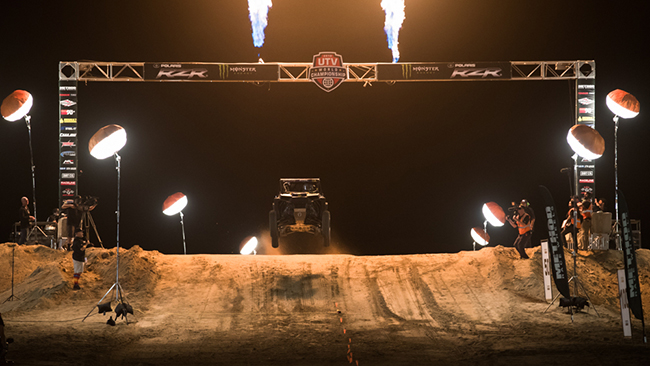 Laughlin, NV (4/5/2018) – The 2018 Polaris RZR UTV World Championship powered by Monster Energy Best in the Desert Series race kicked off Thursday with its first of two days of contingency events. The event continued its unprecedented growth with its largest entry list and a growing list of sponsors.  The contingency events are run as part of technical inspection and are being held in downtown Laughlin. It features a large vendor midway, plenty of chances to interact with the drivers and their machines, and is the perfect way to get fired up for this year’s races. 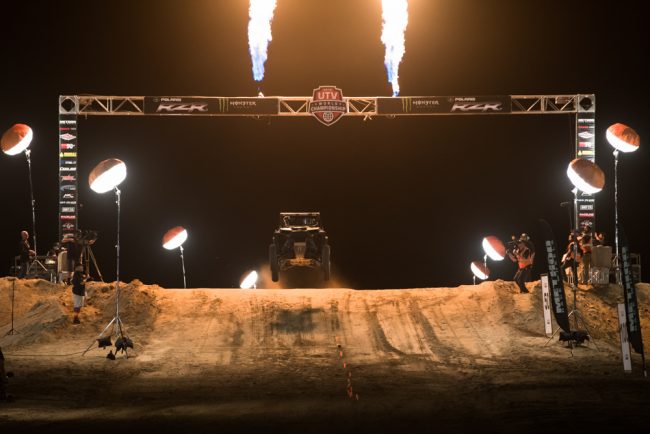 Highlighting the night’s festivities was the return of Laughlin Leap jump contest. Sponsored by Method Race Wheels, the event was held under the lights at the infield jump. Beating out 31 other competitors vying for prizes and bragging rights was former motorcycle racer Cole Freiday, who jumped his Can-Am Maverick X3 117.9 feet to win $10,000 in prizes. Larry Heidler was second with a 106.3-foot jump in his Polaris RZR XP Turbo, ahead of Mark Queen’s 106-foot mark. 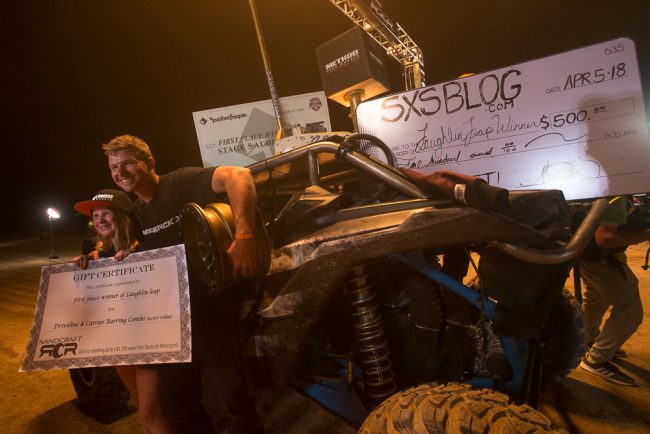 “I just wanted to send it,” said Freiday. “This is awesome, and I am so stoked. It just shows that you don’t need all that backing to come out here, have a good time, and win.”

Leading the way into tech was a large contingent of youth class racers getting prepared for Friday’s racing events. Due to the large number of entries, the youth class is split into two classes: 170cc and 250cc. Racing action will be live streamed on utvworldchampionship.com beginning at 12:30 p.m. PDT on Friday.  Dallas Gonzalez looks to defend his win in the 2017 youth race. This year, he’s competing in both classes. He will run a brand new car in the 250cc and will be running an essentially bone stock Polaris Ace 150 in the 170cc race.

“Polaris gave it to me last year if I agreed to race it, so I had to build a cage and get it ready to race,” said Gonzalez of his new Ace. “I can race my Ace and my brand new RZR with the two classes. This event is easier for us because it doesn’t have a lot of big, crazy jumps that our suspension can’t hold up to.” Kaden Danbury will run his fourth UTV Championship on Friday. He finished on the podium last year and is looking to make the jump to the top step this year. “It’s really fun to see everyone here and the track is always a lot of fun,” said Danbury. “I got a third place last year. I’m looking to step it up this year.” 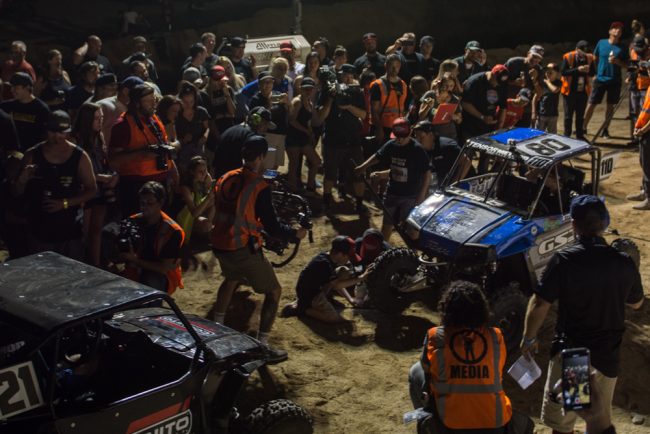 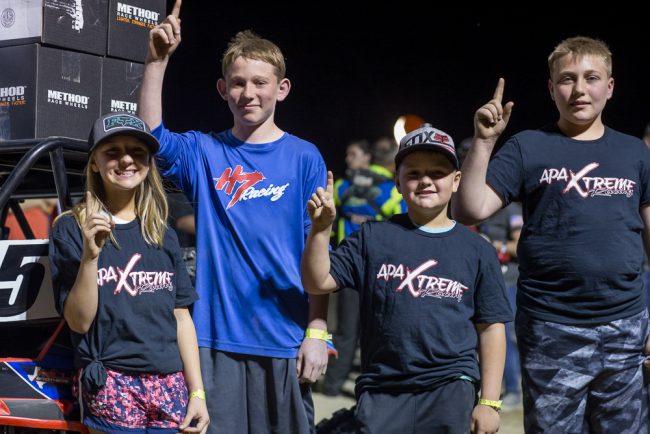 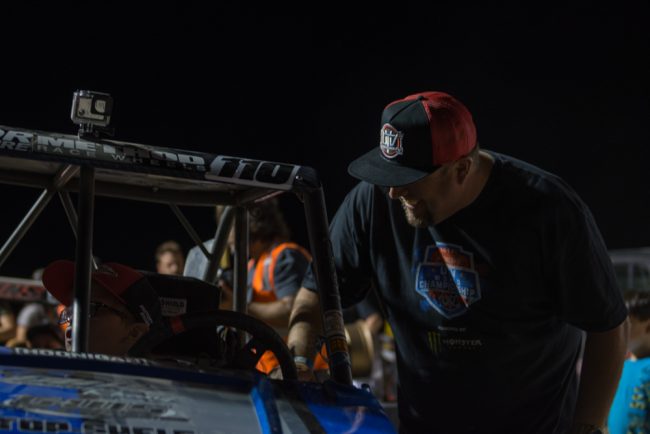 Sponsorship and vendor participation was again on a massive scale. Organizer Joey “D” DiGiovanni was astounded by the amount of growth the event has seen in just four years.  “We have a ton of people that came in a day early to be a part of the event,” said DiGiovanni. “We have over 100 vendors out there, the Kids Crew Challenge and the Method Wheels Laughlin Leap. I’ve never seen the pits this full this early in the event.”

Jason Hess with Liqui Moly was excited to see the success of the event. Showing the overall growth in the UTV industry, Liqui Moly is in its first year of sponsorship of the UTV World Championship. The company is quickly becoming a mainstay name in UTV racing.  “Liqui Moly is excited to be a part of the UTV market,” said Hess. “Liqui Moly is based out of Germany and we brought our product over here a year and half ago. The UTV World Championship is ideal because anybody that wants to have everyone in one locked location it’s ideal.” 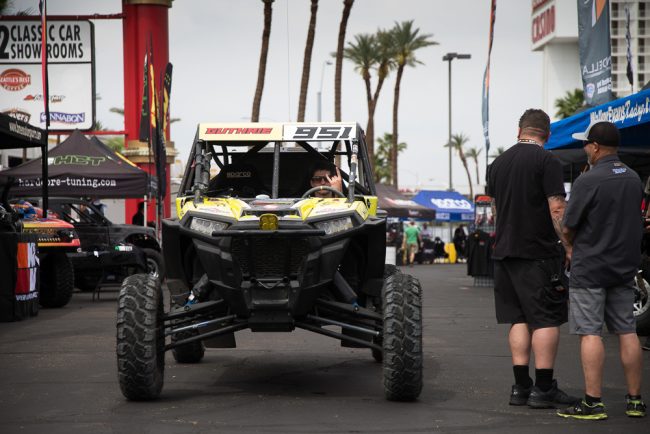 Mitch Guthrie, Jr. is teaming up with RJ Anderson and is running a new Polaris RZR Turbo S in the short course race on Saturday. The race-ready machine is essentially bone stock with the addition of a rollcage and other safety modifications. Guthrie likes his chances in the new machine.  “We’re racing it pretty much bone stock to show just what it’s capable of,” said Guthrie. “It’s an awesome and capable car so we’re excited to see how it does in a race. All we really have is a cage and belts. All the suspension is race ready and bone stock.” 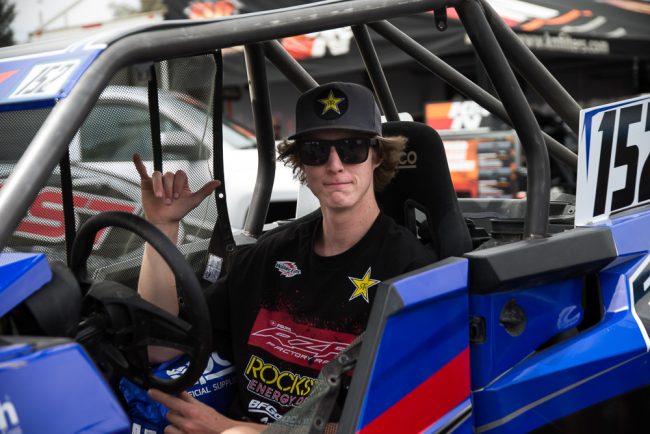 Ronnie Anderson is returning to competition with his Polaris RZR RS1 single seat UTV. Anderson and the RS1 made their competition debut in the WORCS season opener and swept both classes.   “We swept the Turbo and Production 1000 classes at the WORCS opener, so we’re super excited to see how it does in the desert,” said Anderson. “I’ve had some testing time, but this will be my first time racing it since Las Vegas. The car is ready to go for sure.”

The UTV World Championship continues on Friday with youth racing, as well as the second day of contingency. Pro racing is scheduled for Saturday with the short course race taking the green flag at 9 a.m., followed by two longer desert races at 10:15 a.m. and at 2 p.m.