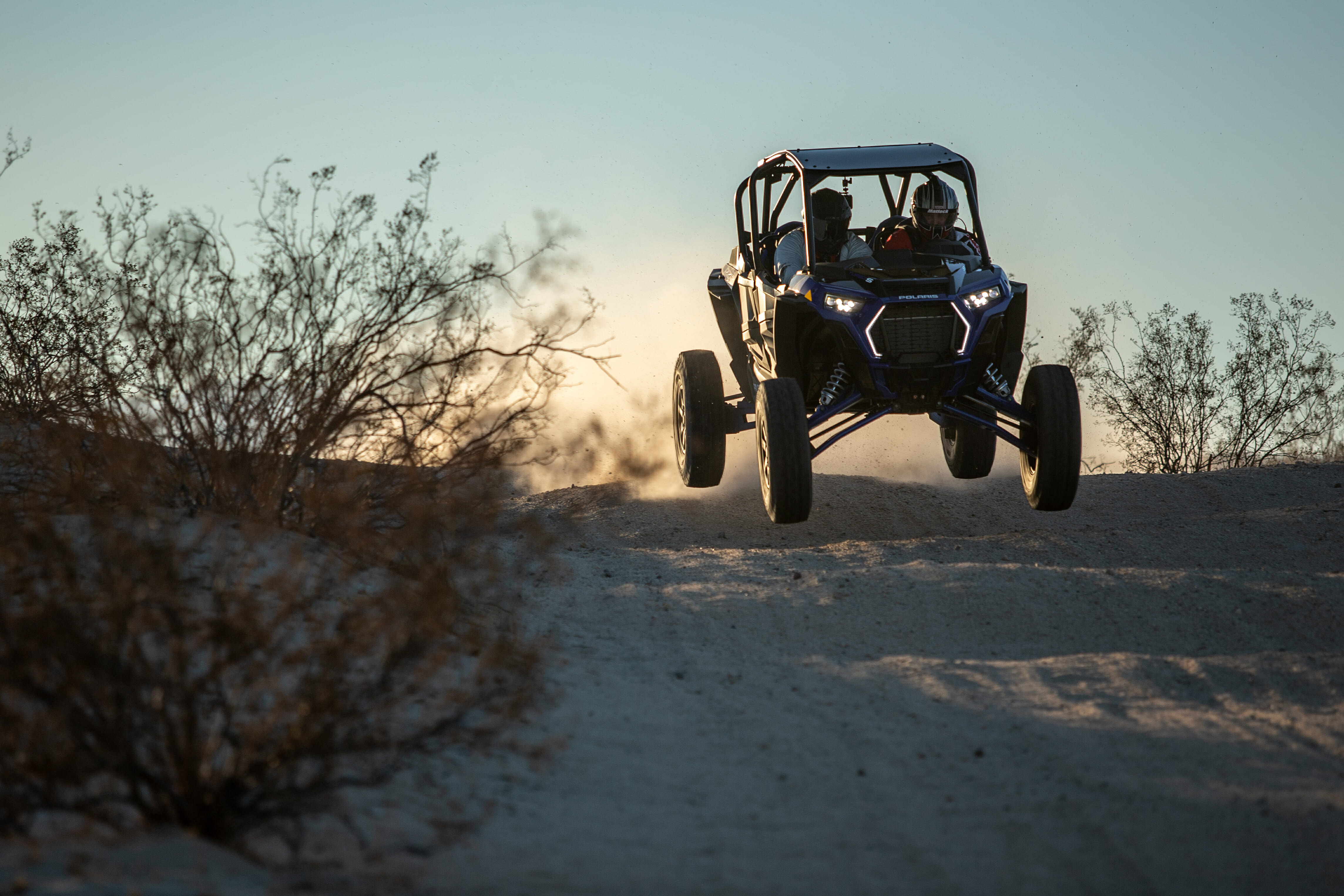 The new RZR XP® 4 Turbo S is here, in stock, and selling fast. Why? It’s by far the most capable and robust four seat RZR ever made and has many, if not all of the features you’ll ever need. Gone are the days of needing to beef up the suspension components, add aftermarket seats and harnesses, or add a roof, GPS, or bigger wheels and tires. This vehicle has it all – and unless you’re a serious UTV tuner, racer, or hard core enthusiast there’s really not much you will need to tweak to make this machine your own. The skinny is this: The XP® 4 Turbo S is a badass vehicle and well worth the sticker price. Here’s a deeper dive for all you fellow tech nerds…

UTVUnderground picked up our new XP® 4 Turbo S at the Sand Sport Show this year and three days later we had her in the dirt sideways – being driven by newly crowned 2019 Baja 1000 UTV Champion Wayne Matlock! For those of you not familiar with Wayne, he and his wife Kristen have become a dominant force in UTV racing – especially down in Mexico. They’ve seen every type of terrain on this planet and won some of the biggest races in North America. They also ride as a family – so we asked Wayne to come thump on this new machine and give us his honest feedback about it as a dad who routinely goes adventuring. And just for good measure we spoke with Pat McArdle, the Product Planning Director at RZR just to be sure we had our facts straight. 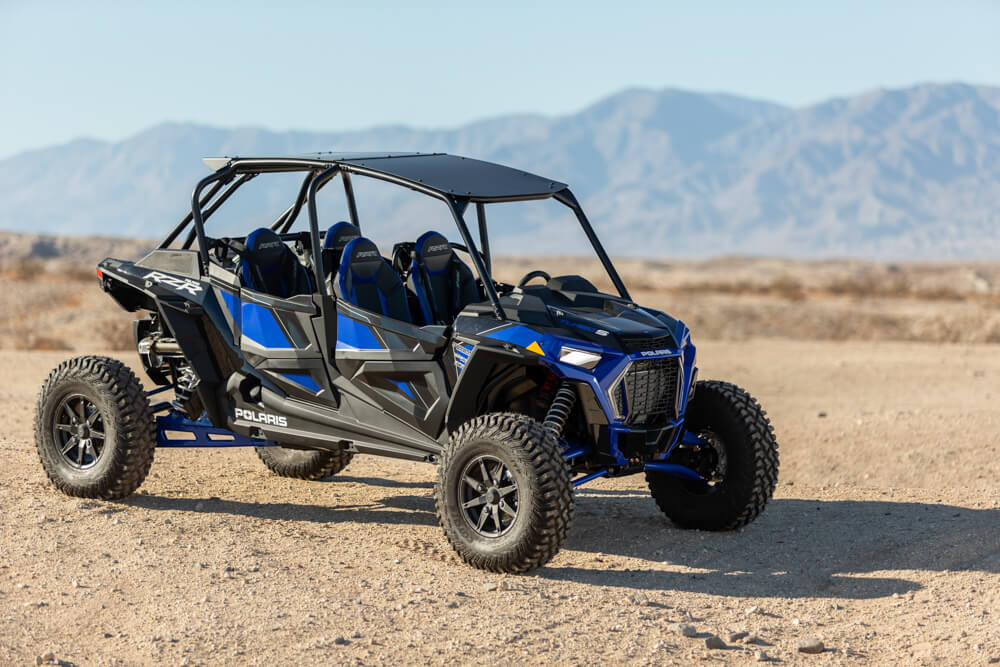 First let’s talk about the interior evolution of these vehicles. The first thing you notice when you look into these machines is the seats now have a factory 4-point harness. There’s been a LOT of debate about this over the years but we feel it’s a must when riding, so we were stoked to see Polaris has made this the NEW standard. According to Pat the Turbo S introduced the 4-point Sub-Zero harnesses as a factory installed feature and is now standard on all Turbo S models, both 2-seat and the new 4-seater. The interior is now designed around a gorgeous 7” touch screen that showcases the new and improved Polaris Ride Command. We love this system. We’ve been on multiple adventures with and without Ride Command and just being able to see your crew on a map is such a time saver. McArdle said that “For MY19 we had a major overhaul to the Ride Command display.  The hardware is an all new design from the ground up leveraging the expertise from the Trail tech team. It is easy to visually see the difference as the new display now has 7 buttons below the touch screen vs. the previous 5. This allowed us to free up quite a bit of screen real estate since the audio buttons don’t have to be shown at the bottom of every screen. On the software and user interface (UI) side of things there are massive updates as well.  The UI is all new and was developed by our digital design team in Sunnyvale, CA out in silicon valley. The mapping engine is all new and is buttery smooth compared to the original 7” ride command display. The gauge / information screens have been cleaned up quite a bit as well. And the whole experience has changed since we now have a fixed segment cluster with speed / tach dials behind the steering wheel, so much of information that would have been redundant by showing in both locations has been pulled out of the 7” screen to allow more real estate for whatever you’re looking at whether that be a reverse camera or map/ trail data.” 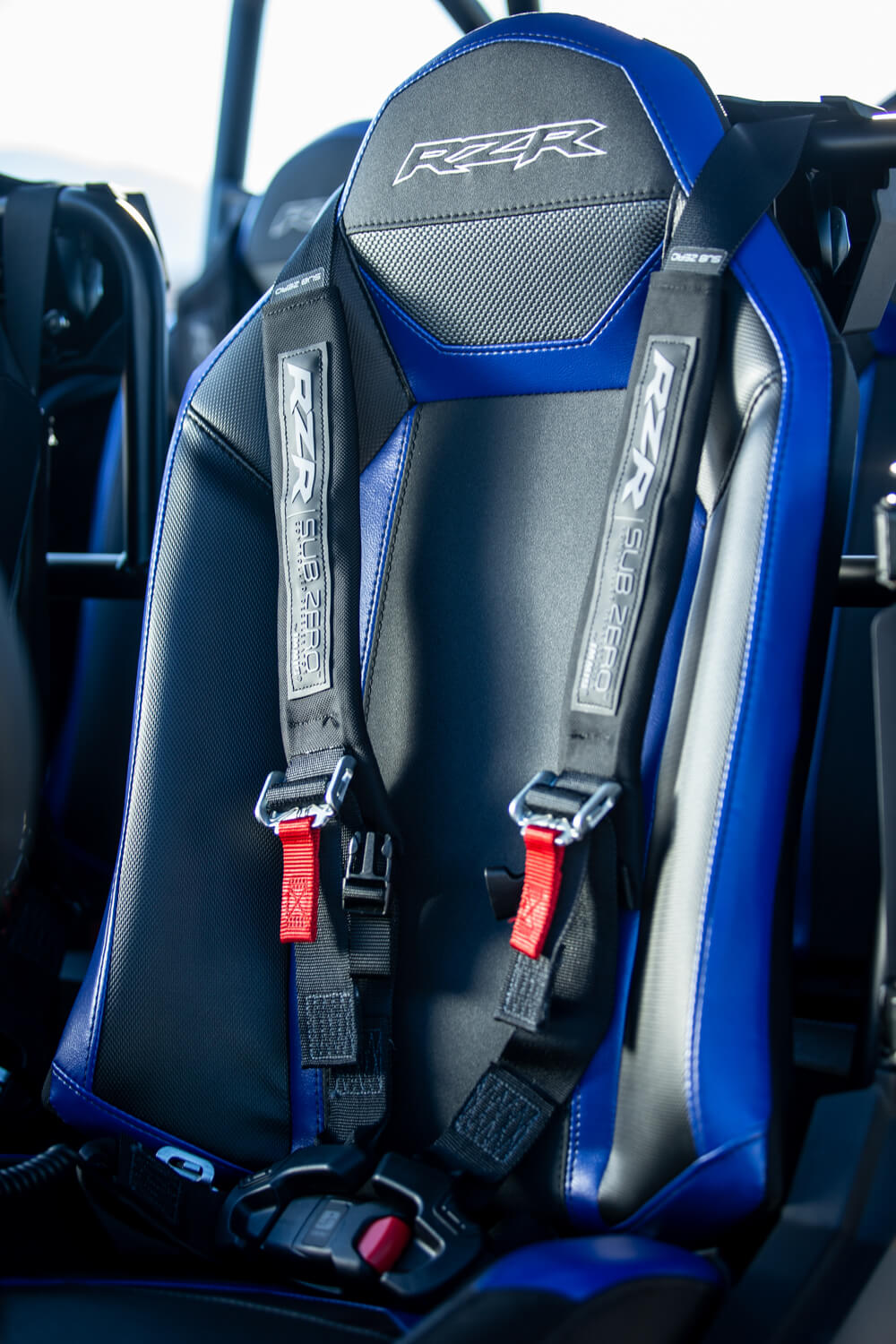 The new Premium Flat-Bottom Sparco Steering Wheel is a really nice touch – let’s be honest the old wheels were pretty much the first thing most of us replaced. And the next thing you notice is the seating position. When Polaris launched the RS1 they learned a lot about what it takes to give riders a confidence inspiring set of ergonomics, and the seat to steering wheel position is a huge one.  A few years back they changed the seat back angle on RZR’s to make the seats a bit more upright as that tends to give people a more confident view angle over the hood. The RS1 took it a step further and moved the steering wheel position a bit closer to the driver and also changed the location where it tilts. So, not only did this allow the drivers to keep their shoulders planted in the seat all the time, it also made the steering wheel a bit more vertical to give better leverage when railing through corners.  This exact set of driver ergonomics was then carried into the Turbo S models (both 2 and 4-seat). Overall this is something that some people won’t pick up on right away, but after a day of riding in Ocotillo Wayne felt it for sure. Moving from the interior to the business underneath this new machine, it’s apparent that Polaris has completely redesigned and beefed up their new flagship 4-seater. They’ve upgraded the drivetrain, the tires, and the chassis. When we asked Pat about this he said “As we grew the overall width and dramatically increased the tire size with the 32” ITP Coyote’s the loads that the suspension and chassis are subjected to went up quite a bit.  This required that we let the engineers rethink how to build the suspension and the team created a phenomenal setup that can stand up to just about anything the Turbo S can unleash! And yes, of course when you beef up all those components there is going to be a bit of a weight added, but overall the team did an excellent job of optimizing the designs to only add weight in key locations and not just beef up everything across the entire machine.  Overall the dry weight of a Turbo S 4-seater is 1989 lbs. This weight comes from many areas including the suspension, chassis, brakes, harnesses, cage, roof, Dynamix, Ride Command, cooling, body, etcetera. Overall the RZR XP 4 Turbo S is a beast and when you look under the body, you’ll see that there are tons of changes to the machine.” And speaking of Dynamix – is the real time computer controlled suspension system from Fox Shocks really that good? Yes. It is. It’s a  giant leap forward from their performance obsessed engineers. The centerpiece of the S4 DYNAMIX system is the upgraded 3.0 Internal Bypass Fox Shocks. They come with a custom calibration for the DYNAMIX system to optimize the suspension travel, for both low speed comfort & high speed performance. Being able to switch between the different settings in a matter of seconds – based on the terrain, is a huge step forward for the UTV platform. This feature makes the machine safer and more comfortable on long rough rides.

Another other major upgrade to the suspension is the new Isolated Front Drive. We asked Pat to break this down a bit more and here’s what he said. “ The isolated front drive does a couple major things. As the name suggests, it isolates the front gearcase from the chassis.  What this does it basically eliminate all driveline noise from the cockpit area. Whereas some machines will be have a bit of gear / shaft noise that gets translated through the chassis and floor and into the cockpit, this is virtually eliminated on the Turbo S models. It is also way frickin’ beefier than any other front drive RZR has ever used.  So this means that it is also the most durable front drive we’ve ever had. If you ever get to see the isolated front drive next to a standard front drive out of machine it will blow you away at just how much larger and more robust this new one really is. And when you have a machine with more capable suspension, it’s always a good idea to couple a driveline with it that’s just as capable!”

The fact is, the suspension on this car is so good – 90% of you won’t want or need to mess with it. The Bigger/Stronger Axles and the the control arms, radius rods and trailing arms are all bigger and stronger. The Knuckles, Bearings, Bearing Carriers, ball joints, prop shafts, and tie rods have been beefed up. Even the roll cage is better and stronger. There’s a noticeable increase in steerability and that’s because Polaris put 25% more assist in the power steering. When Wayne pushed the S4 hard in the rough terrain it remained easy to steer and control. 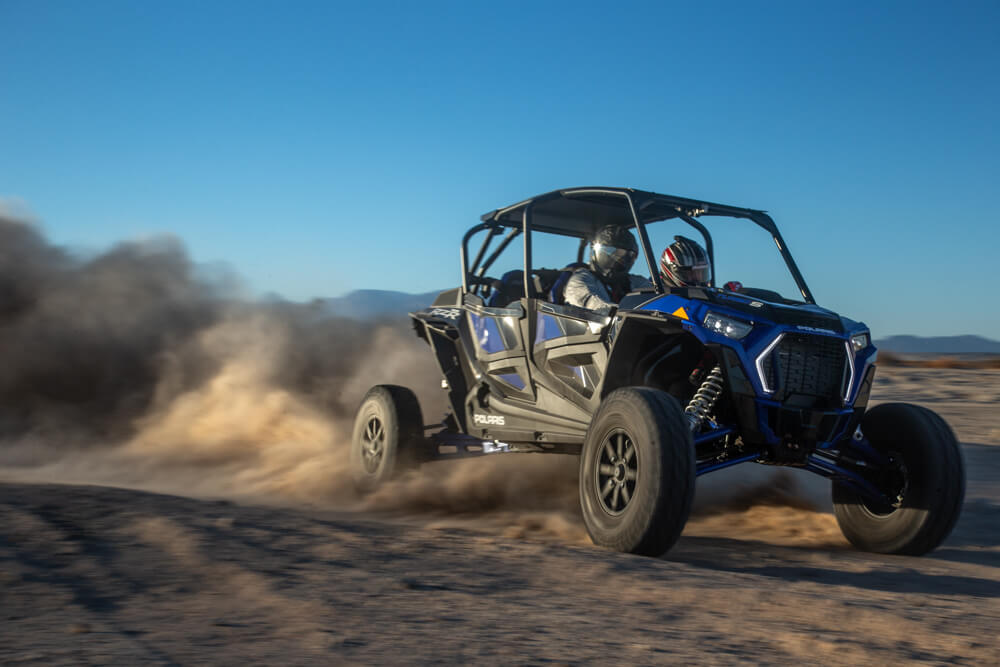 We took this new machine at breakneck speeds over some massive jumps, and whoops out in Ocotillo and it felt like butter over some really nasty terrain. We noticed right away that the suspension soaked up the rutts and didn’t buck the car at all. When digging into the turns we did notice the ITP tires at full pressure were a bit unpredictable at times, but that was our only minor complaint on this vehicle. Something we could have fixed easily with a tire pressure adjustment.

So what did Matlock think of the new beast? Wayne was pretty damn impressed. After a few hours of driving we pulled over and he explained that the machine felt “solid, predictable, and nimble even in the rough stuff.” He loved the fact that the suspension has been so heavily upgraded and laughed saying “I don’t need to do anything underneath these cars to take them pre-running in Baja now. That’s awesome.” If you’re like us – when you buy a new UTV you quickly do the math on the aftermarket parts you want for your machine.. Cage, suspension, wheels and tires, stereo and so on… Polaris has just delivered a machine that arguably does not need any work to the suspension.  And things like the wheels, tires, cage and seats have come a long way and will suit most owners just fine. Kudos to the team from Minnesota for pushing the envelope on this new four seat beast.

In the coming months we’ll be building our own custom UTVUnderground Polaris RZR XP® 4 Turbo S, so stay tuned for complete coverage of that. Meantime – the XP® 4 Turbo S gets our official seal of approval and thumbs up. Congrats to Polaris for once again driving this platform to another level – and special thanks to Wayne Matlock and Pat McArdle for contributing their expertise to this breakdown of the new Polaris RZR XP 4 Turbo S.