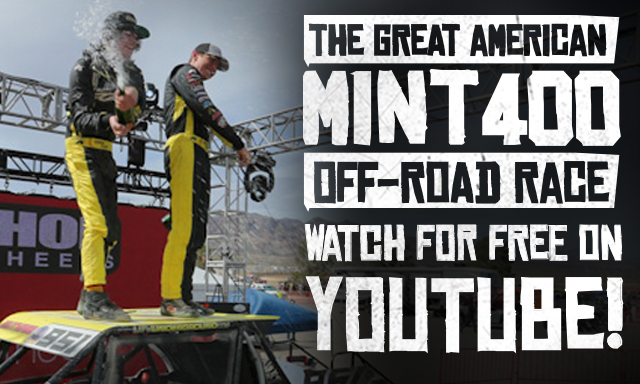 The 2017 Polaris RZR Mint 400 presented by BFGoodrich Tires held up to its reputation for being one of the toughest courses in off road racing. Las Vegas native Rob MacCachren, who, in his 30-year career has won nearly every race and championship imaginable, finally sealed the deal and won The Mint 400 overall. Relive the magic and watch the Mad Media produced documentary style televisions show for free on YouTube.

The Mint 400 program features the spectacular Mad Media style of stunning action packed cinematography and authentic storytelling. Led by the directing team of “The Martelli Brothers”, Mad Media’s crew of over seventy included ten of the best cinematographers in the business, who utilized a variety of cinematic tools including cineflex helicopters, RED camera systems, DJI drones, and hundreds of GoPro cameras to capture all the action.

The two hour documentary style show feature segments on off-road racers Cameron Steele, Todd Jackson, Jason Voss and the husband and wife team of Wayne & Kristen Matlock, as well as two unique in show pieces on the intertwined history of The Mint 400 and Fox Shox and the Youtheory Racing multi-vehicle team of off-road veteran Harley Letner and rising stars Anthony and Jeff Terzo.