As UTV competitors continue to produce some of the best competition in desert racing, Wayne Matlock wrapped up a season for the record books with his win in this year’s 51st SCORE Baja 1000. Matlock took his seventh career Baja 1000 victory, his second since making the move to UTV racing, and most impressively, he did it by driving all 800-plus miles of the event himself.

“(This win) is pretty high up there for me!” Matlock said. “This is the first time I’ve won doing the whole thing myself, which is a feat I wasn’t actually sure I was going to be able to pull off. I actually had a backup driver (Josh Row) signed up to drive the car in case I got too tired, but he got in the passenger’s seat because my co-driver got sick. So Josh got in the seat and co-drove for me for a couple hundred miles, then he got back out and Daniel (Felix) got back in to finish the race off with me.”

Lining up toward the back of the Pro UTV Forced Induction field, Matlock elected to let other competitors feel out the course in front of him and not push too hard to early as a solo driver. But by race mile 180, he was already fighting for the physical lead, and well before the halfway mark, he found himself in the top spot for good. 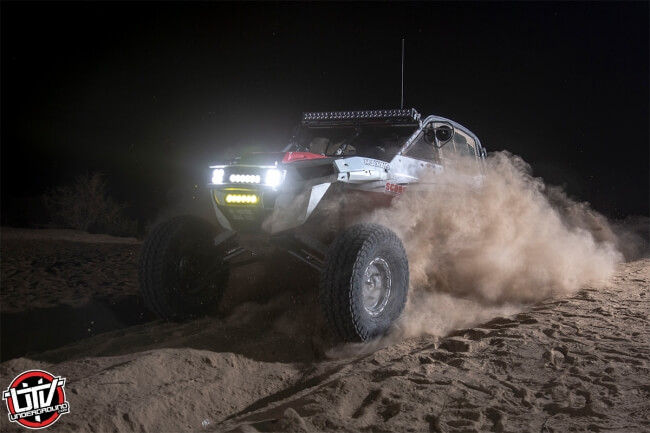 “One of the big reasons for me to rear start was because I was going to solo the event,” he explained. “I didn’t want to be the one to set the pace—my goal was to sit back and drive my own race, and whenever I got into the lead, maintain a steady pace. We kept to our plan perfectly: once we got into the lead, I just went and had a good pace, I didn’t push too hard, and if somebody was going to come up and challenge me, then I could push.”

But as dominant a performance as it looked like on the charts, the reality was anything but. Challenging conditions took down a number of top teams, and not even Matlock was spared from the difficulties.

“The silt beds that we went through were absolutely the worst silt beds I’ve ever seen in my life!” Matlock admitted. “It was absolutely like a war zone out there—there were broken down cars everywhere, and I almost got stuck. I was the closest to ever getting stuck in a UTV that I’ve ever been, but we got through it.

“We came to the next silt bed after almost getting stuck in the first one, and I stopped the car, waited for the dust to clear, put the car in low range, and went through the bushes and the trees doing about five miles an hour just to make sure I didn’t get stuck! But we got through it, and we kept on going.” 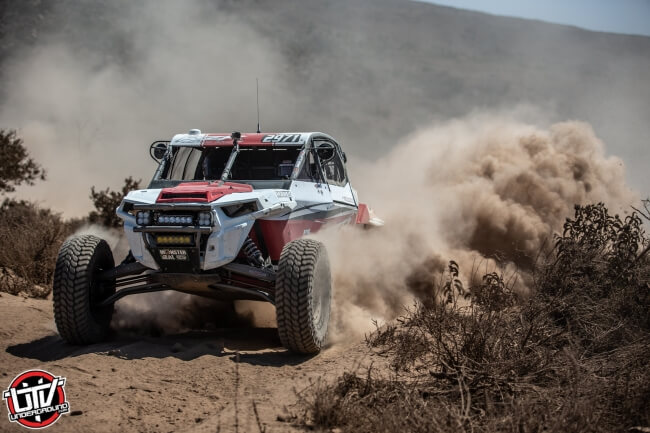 With two wins and two runner-up finishes, Matlock also claimed the overall 2018 SCORE World Driver’s Championship, a first for UTV competitors. He earned the honors by just a single spot over the legendary Rob MacCachren, who also took two victories but finished third in the 1000 this year.

“It’s something I didn’t know was even a possibility until, before this race, somebody told me I was tied in points with Rob Mac,” Matlock noted. “Just to be tied in points with him was super cool for me, but I think the coolest part of the whole thing for me was that Rob was actually the one to tell me that I got him, and the first one to congratulate me. That was huge for me.”

For now, though, preparation has already started for the 2019 season. Matlock will kick off his 2019 season at next March’s Mint 400, and both he and wife Kristen can be expected to contend once again for SCORE titles in 2019 in their respective UTV classes. 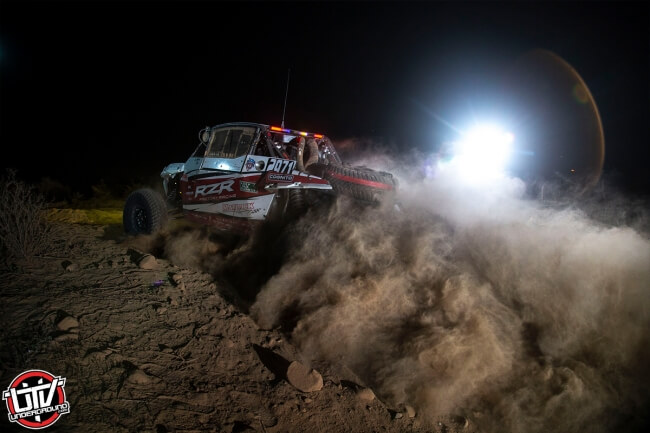 “The preparation for 2019 already started (Tuesday) morning with getting the shop reorganized and the cars are being torn down already,” he confirmed. “I always say that getting the championship seems like the easy part, but keeping the championship is the hard part. I’ve won six SCORE titles now, and I’ve won Baja five times on ATVs, and now two times on UTVs. We’ve been pretty blessed to have a lot of things go our way, and a lot of great people, companies, and organizations behind us, pushing us along.

“We’ve surrounded ourselves with really good people on our team—our mechanic, Daniel Felix, has a really good handle on the cars, and the program has been really working well this past year.  We try not to take anything for granted, because there are a lot of other people in this industry, a lot of other drivers, that are extremely talented as well. But we try to put the hard work and effort back into our program, and every dime that we can scrounge up for racing goes directly toward racing. We put a lot into the program, my whole team does, and we appreciate it more than I can ever express.”