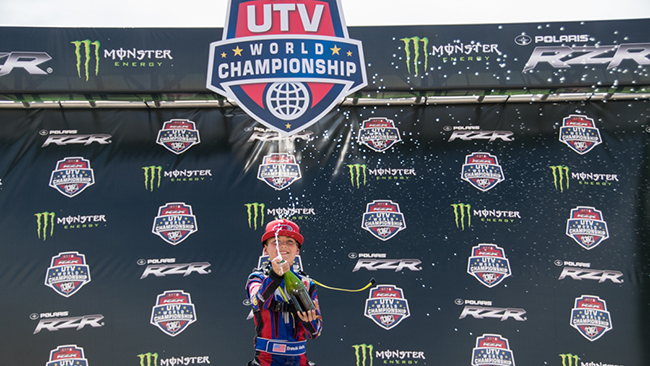 Click here for unofficial results for the Youth 170 race.

Click here for unofficial results for the Youth 250 race.

Laughlin, NV (4/6/2018) – The 2018 Polaris RZR UTV World Championship powered by Monster Energy continued into its second day of contingency and tech inspection as the largest gathering of UTVs celebrated its youth racers. Friday’s festivities moved to the track with the two youth class races sponsored by Carr One Fabrication. 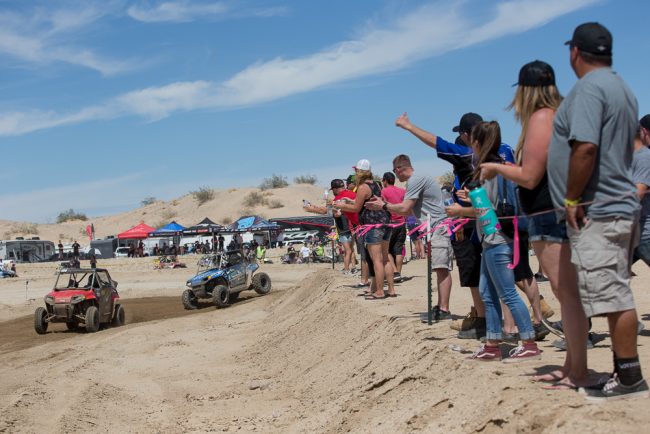 Weather was beautiful with temperatures in the mid 90s. The course was tamed down from last year’s circuit with one small jump, several long straightaways and plenty of passing room in the turns, making high speeds was key to success. The size of the entry list necessitated running two classes of youth racers: 170cc and 250cc with record combined 68 youth entries. 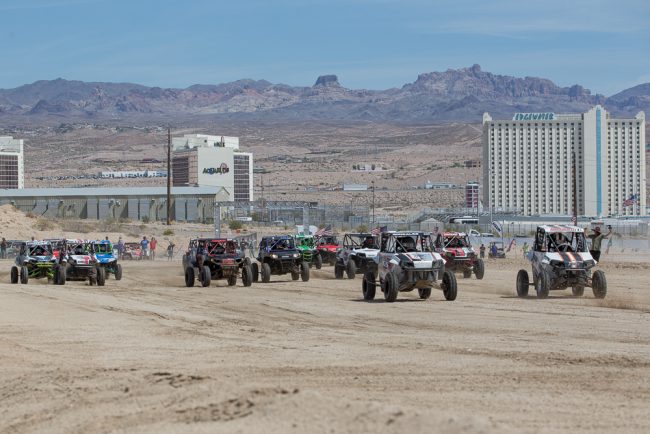 In the 250 class, Dallas Gonzalez won the event for the second year in a row. He took the lead early and dominated the event in his newly built Polaris RZR. Jacob Peter was second after battling his way through the field with aggressive moves in the corners. Kaden Danbury put bad luck behind him and scored the final spot on the podium for the second straight year. 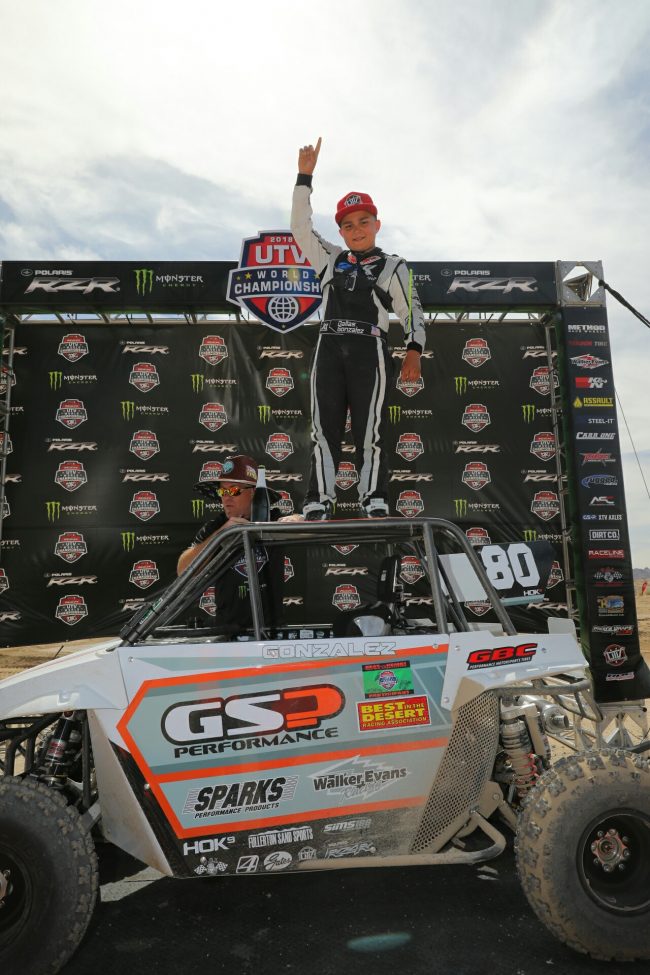 “The throttle got stuck a bunch, so I spent some time on two wheels today,” laughed Gonzalez. “The car was like a rocket this year. We got this brand new Polaris and built it. We tested it, rebuilt the motor and came out here to win. Pete from GSP built the car and prepped it. This is a big deal. Thanks to Polaris and the win, I get another RZR to build for next year. I can keep rebuilding the cars, making them faster, and hoping for another win.”

Peter’s RZR wasn’t geared high enough for the high speeds, but he made the most of his setup. Getting into the corners late and exiting faster worked out well for Peter as he scored the runner-up finish.

“I had to stay on the gas longer than others and hit the corners harder,” said Peter. “The Polaris RZR worked really well on the jumps and turns out there. I had to do some sketchy turns to get past people. It is awesome to get a second place finish at the UTV World Championship where tons of people come to race.” 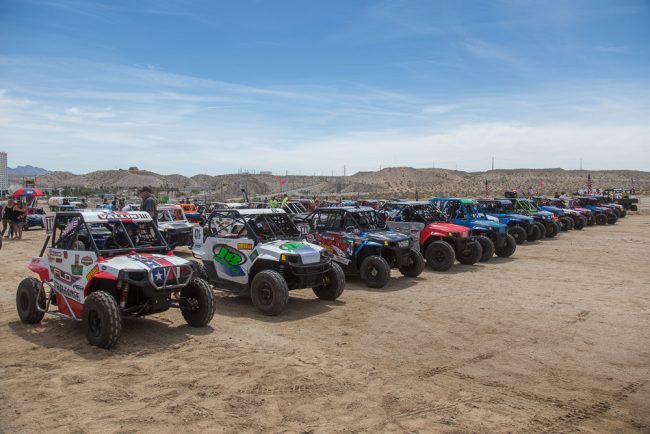 In the 170 class, more than 30 UTVs started the race and Travis Sallee took his first big win. After starting on the second row, George Llamosas charged through the field to finish second followed by Ethan Groom in the third spot. 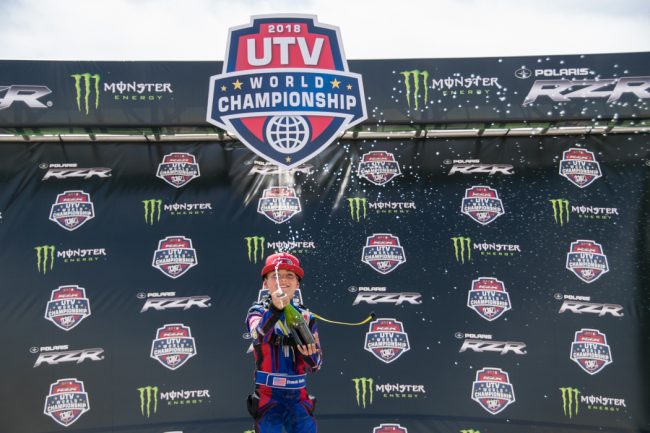 “Eventually, I passed the leader,” said Sallee. “I got out front and stayed there. I’m stoked to get this win. This is my first win in the UTV World Championship. I want to thank Jagged X, Polaris, Benchmark, and Elka.”

Llamosas took the holeshot on the second row and drove his heart out to score the second-place finish, bettering his 2017 results by 20 places. It marked the young racer’s first podium.  “I was impressed how the GSP Polaris RZR worked for me today,” said Llamosas. “It’s just amazing to be here. It was a pretty good race and the track felt amazing with this car. It got rougher lap after lap.” 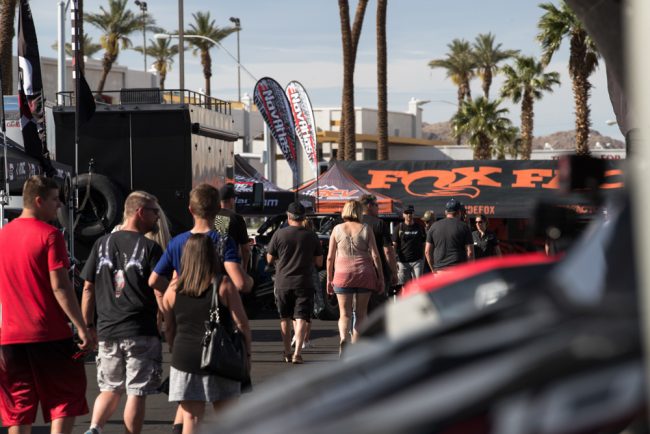 BC Vaught from the Road 2Recovery Foundation announced a sweepstakes where participants can get the chance to win a custom built $44,000 Polaris RZR Turbo. Road 2 Recovery helps professional AMA licensed professional motocross/supercross members with financial assistance if they sustain career-ending injuries. The winner will be picked after Camp RZR in October.

“Basically, Polaris donated the RZR to Road 2 Recovery and we’re running a sweepstakes through the end of Camp RZR when a winner will be picked,” said Vaught. “It’s a $44,000 RZR Turbo that someone can win for $5. We’ll display it at certain Lucas Oil events, Sand Sports Super Show, Off Road Expo and after we’re done someone will win it. Winners don’t need to be present and shipping is covered so it will ship right to your doorstep.” 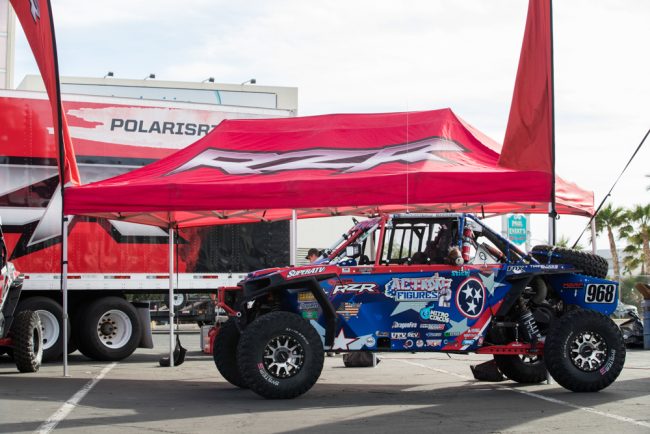 Besides some incredible youth racing action, there was plenty going on at Contingency, and Travis Pastrana’s mechanic and everyone’s “favorite redneck” Hubert Rowland drove his Polaris RZR across the desert from Phoenix, AZ to get to the event. The ultimate trail ride comprised over 200 miles and it took him 17 hours to get to the event after running through the desert. Rowland is competing in both Pro events on Saturday.

“The Polaris RZR worked great,” said Rowland. “This one is built for desert racing, so what better way to get it broken in than running 200 miles? This is my first year in the desert and it’s pretty wild and really neat. This is more of a true spectacle with vending and little events. It lets people get involved, have fun and go racing. I help with a lot of big events like Nitro Circus, Supercross, and Monster Jam, and each of them have their own following. This is a mix of all of the followings. It’s really neat to see people from all realms come here. This event is going to be amazing.”

Russell Porter from Buggy Whips participated in its first UTV World Championship this year. Porter showcased his unique products in the extensive vendor row on both contingency days. Many racers are running the lighted Buggy Whips to help their teams easily identify their cars during racing conditions. 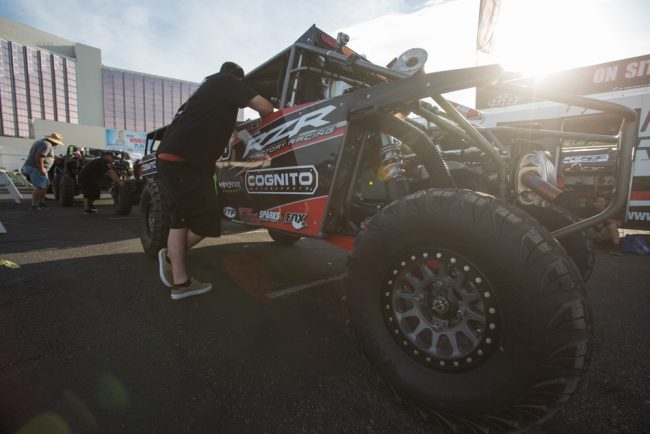 “This is our first year here and the event and the people are incredible; I just can’t believe the excitement around the two-day event,” said Porter. “I cannot believe how many UTVs are out here and you can see how much this sport has grown in the last five years. Polaris has done so much for this industry and they have changed what we have now.”

The evening was capped off with the top three youth racers receiving there awards at the drivers meeting, which also included an emotional memorial to the Chad Ragland who lost his battle to cancer this year, and he will be truly be missed by anyone that ever had the pleasure of knowing him.

The UTV World Championship continues on Saturday with the short course race taking the green flag at 9 a.m., followed by two longer desert races at 10:15 a.m. and at 2 p.m, and be sure to watch the live stream at utvunderground.com.