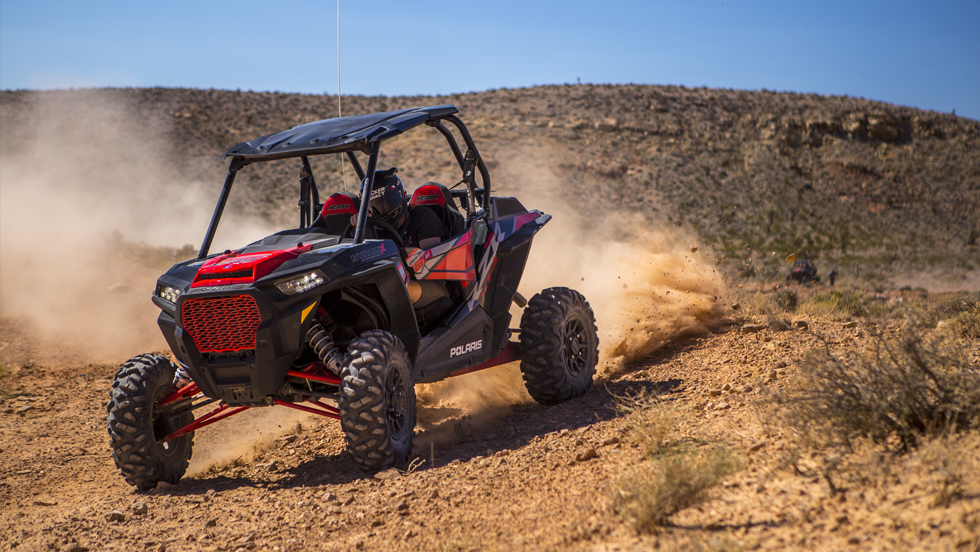 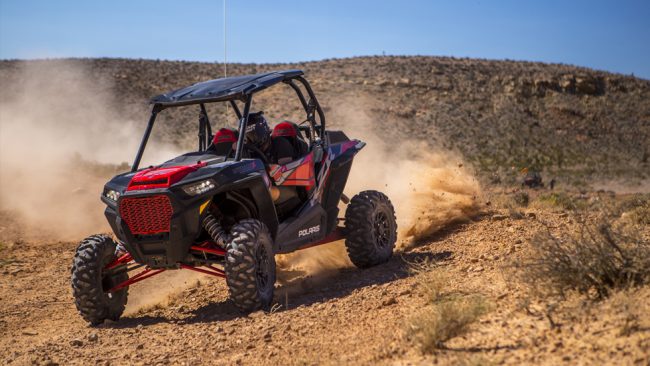 Polaris has once again changed the UTV market. Polaris introduced Dynamix Active Suspension utilizing FOX Live Valve technology to their proven RZR Turbo platform for 2018. This suspension is nothing short of magic featuring computer controlled vehicle monitoring systems that records steering wheel position, throttle position and speed. All this data runs through the computer and then on to the shocks giving the driver and the machine on the fly automatic dampening. The system reports back at 200x per second, a statistic that Polaris is very proud about as they should be. The results are truly amazing. The user ends up with a machine that is smooth, controlled and very predictable without the hassle of constant manual adjustments. 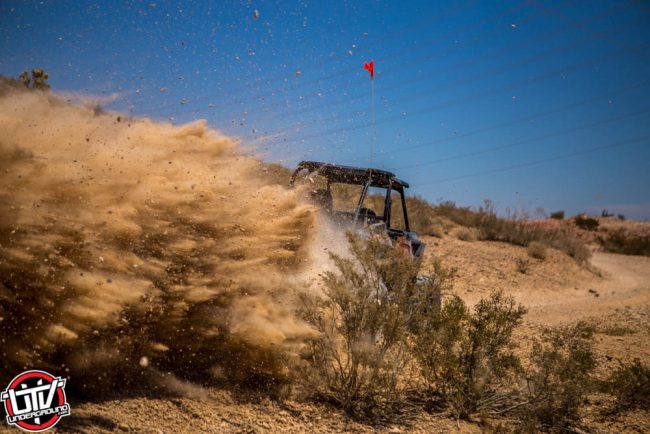 Polaris RZR athlete and accomplished off road racer Mitch Guthrie Jr and I headed out to Jean, NV in the dead of summer as guests of Polaris. The area is where the famed MINT 400 is held amongst other famed off-road race events, and is home to some of the nastiest desert terrain in the US. Mitch and I were invited to test the Polaris RZR XP® Turbo EPS Dynamix Edition on a trail ride led by Zero 1 off-road tours. The ride would start at Zero 1’s location just north of Jean and take us west to Goodsprings, NV. Our destination was the Pioneer Saloon for a lunch stop. I want to take a second here and point out….. its late July in the middle of the Nevada desert. There is nothing cold for miles in any direction, dust devils cover the dry lake and the sun feels like its 25 feet over my head. This was the perfect condition to test a shock and or a new machine, it was also the perfect condition to verify the 2018’s cooling system and see if my body could withstand heat stroke. 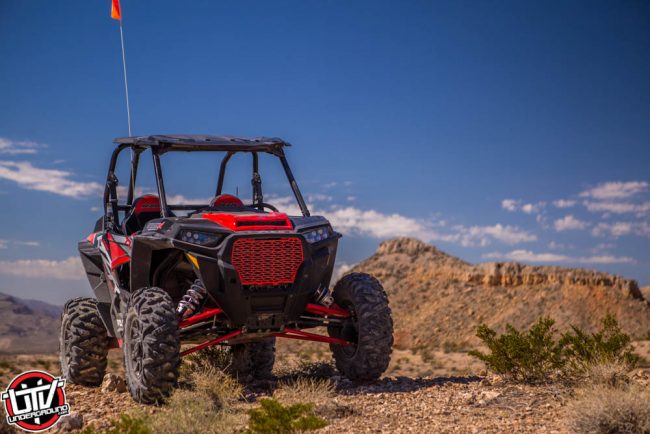 We pulled into Zero 1 at 8:00am before the real heat set in. There were 15 or so units lined up with media outlet names on them. We find our machine labeled UTVUnderground.com and load up the camera gear. Polaris gives us a quick 30 minute machine over view then Zero 1 explains the ride and the rules. Mitch and I are not the best when it comes to following rules, Polaris gave us some extra attention and expressed to Mitch that even though he won the Mint 400 this year in his Factory Polaris RZR that he was not to attempt a repeat during the demo ride. Each RZR had a Rugged Radios equipped radio installed by Zero 1. This is how the lead car will communicate with us.

We strap in and line up just behind Dax Shepard. Dax is a famous Hollywood actor for those of you who don’t know, he is also a big off road enthusiast and he loves the RZR platform. Mitch is going to drive the first leg but I am wearing the radio in my helmet to listen for any instructions from the ride leader. Less then a half mile into the trip and we are in trouble. In my ear I hear, “RZR with the flag please slow down, this is not a speed zone”. I tell Mitch “I think we need to slow down” Mitch responds “Why, these cars are fast and we are testing how fun they are. Slow is not fun.” This type of thing happened almost the whole way to Goodsprings. To summarize we were really fast in the fast section and too fast in the slow sections. If you know anything about the name “Guthrie” you know that fast is what they do.

Back to the RZR. Before the ride they recommend we run in comfort or sport mode and the let the suspension do the rest. The Dynamix is equipped with a 3-mode dash mounted switch that allows the driver to click between Comfort – Sport- Firm, each mode represents a different factory pre-set shock tune. The chatter bumps on the trail were bad but comfort mode smoothed them out and made the section bearable and well, comfortable. Later we started to get in some larger rollers so Mitch flicked the switch to “FIRM” and used the gas pedal to bend the floorboard to make big dusty. Our plan was to try and over heat the shocks. We wanted to see if we ran it hard for a long period of time would it start to fade. We were both surprised to see there was very little noticeable fade. The summer sun was pounding by this point. We hit a few G-Outs (these were called out by the lead car) but we didn’t listen. 70mph plus into 3’ holes and we never bottomed out or lost control of the machine. We were both very impressed. 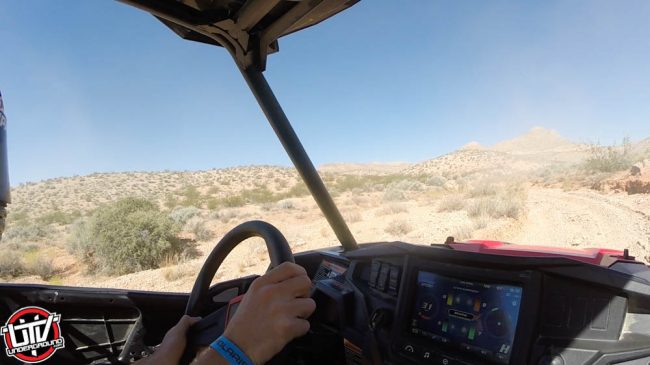 After about 2 hours of riding and pushing the machine to its limits in all settings we pulled into Goodsprings. We hit a pavement section and stopped to let everyone bunch up. Mitch switched back to comfort mode and suddenly the RZR lowered about an inch or so. We remember hearing a Polaris engineer telling us the RZR should increase ground clearance in firm mode. We just didn’t expect to see or feel a difference. As we travel through town we kept switching back and forth to lift and lower the car. At this point the lead car had stopped yelling at us for trying to bike the RZR through town and we just cruised in with the pack. 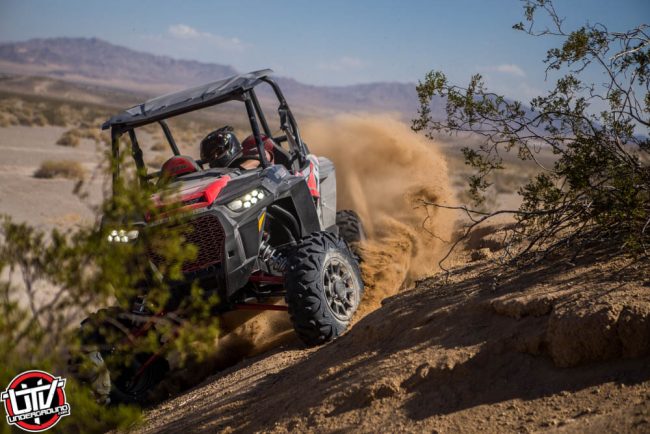 Goodprings, NV is a tiny town just west of Jean. At one point in the early 1900’s it was the most productive mining district in Clark County. In 1913 the Pioneer Saloon was built. This place was really cool. The walls were covered in historical memorabilia and some of the original bars and decorations are still in place. The food was good and the company was great. There were 20 plus media outlets all talking about their ride so far. Mitch and I sat with a few Polaris employees to talk specs. 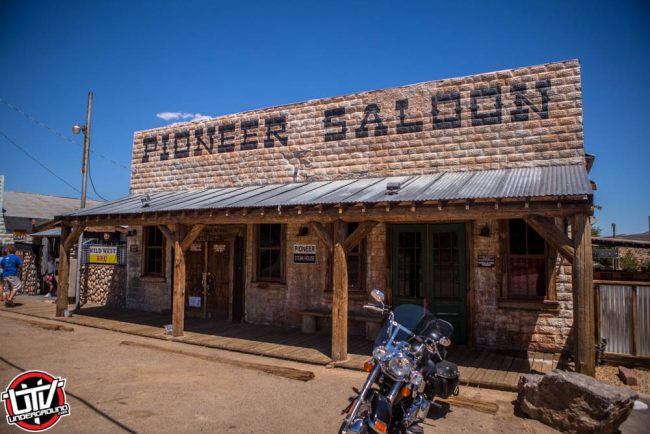 After a great meal and some crazy ghost stories we strapped in to head back. Now I was driving and Mitch was along for the ride. The plan was to make the return trip in comfort mode so we could see the difference. It was just after noon and the temps were cresting 100 degrees. The dust was heavy and so was my foot. Two times I pushed a little hard through the dust and we hit some big holes. Comfort mode soaked them up but you could tell we were at its limit. 5 more MPH and these holes would have hurt. At this point is where Mitch and I start discussing how cool it was to flick a switch and change the car characteristics. It was like a switch activated insurance policy. When the road gets nasty flick the switch and pedal out of it. I actually enjoy driving in the dust but in order to really feel what the machine could do we let the pack run ahead to create a gap of clean air. 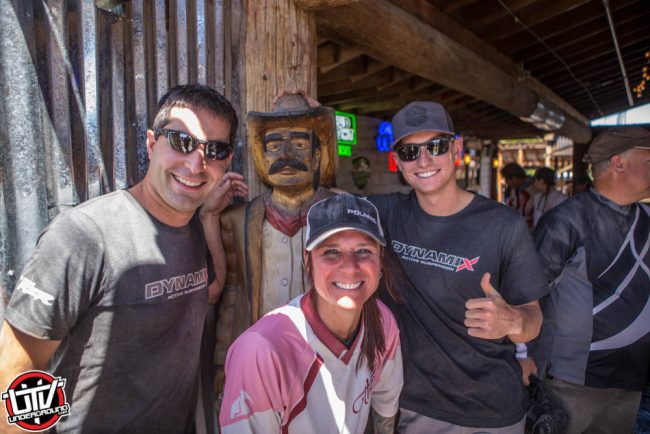 Once we had a mile or so of cushion we felt it was time to push it. The goal here was to compare comfort mode to firm for one final confirmation. I jumped on the gas and we noticed the rear shock diagram changed from 1 to 4 instantly. Before I get to far, I should mention. The Dynamix system is all tied in through the Polaris Ride Command digital dash system giving you a full screen dedicated to just the shocks. A scale of 1-10 is used at all four corners allowing the occupants to monitor the load being put at each corner. This is a cool interactive way to see just how the shocks are working and will verify your Dynamix system is working in the proper setting. Anyway, the launch was very controlled and it appeared the shocks adjusted with the accelerator. The RZR’s brain saw the amount of throttle applied vs our vehicle speed and came to the conclusion that we were taking off hard from a dead stop. The computer adjusted the rear shocks to reduce anti-squat and get the power to the ground. This sounds like a lot to figure out but the computer and sensors did this in 10 milliseconds and shocks can react within 40 milliseconds. In the blink of an eye the RZR adjusted to our driving style and set the RZR up to perform perfectly. 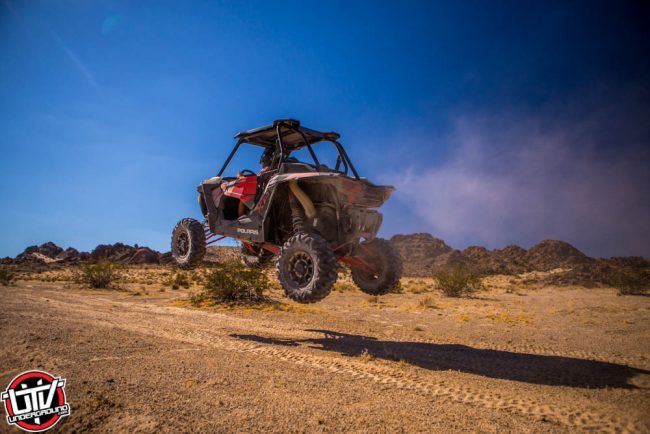 As we pulled back into Jean we had taken some shots. The g-outs were much harsher in comfort mode, the skid plate had been used for sure, sorry boss. The ability to adjust on the fly was really cool. We ride in the southwest. The sand dunes require a different set up than rocky desert. The mountains even require a separate setup to get the most out of the machine. The three modes with the onboard monitoring system make this car perfect if you ride in many different terrains. 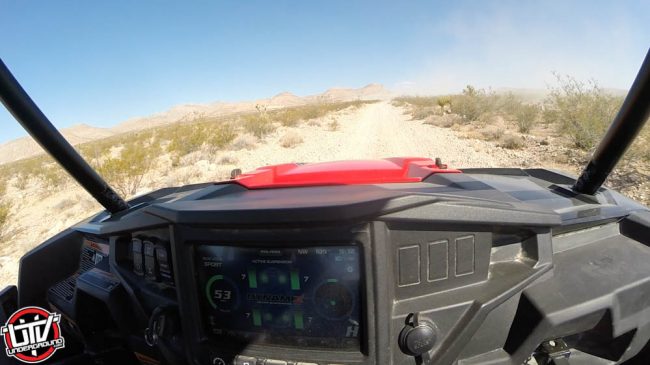 The crew cut us loose just behind Zero 1 to shoot pictures. I assumed my role as photog and Mitch is well, “Mitch”. He is a professional Polaris RZR driver. Naturally he jumped behind the wheel with a big grin and proceeded to blow the desert up. Silt turns, jumps and monster whoops at 75 plus. Watching Mitch throw this stock RZR around like it was a pure bread race machine was magical. It never got out of shape. We can go on for days about specs and features. But there is a factor that can’t be written in a spec. Memories have more value than any tangible thing in the world. I was raised in the passenger seat of a classic dune buggy. The years I spent as a child touring the deserts in the southwest are my most cherished memories. Now I am driving my kids through the deserts, mountains and sand dunes. People often rate vehicles based on miles per gallon, I use smiles per mile. The memories made behind the wheel of a UTV are priceless.

On behalf of Mitch, myself and UTVUnderground.com, I want to extend a huge thank you to Polaris for inviting us along to test the all new 2018 Polaris RZR XP Turbo Dynamix. Overall, its a very impressive machine. Its quick and powerful and the technology this machine showcases is a big tell into the future of not just Polaris but the entire industry. As Polaris’ competition begins to narrow the once massive gap they held over the industry, its exciting to see that Polaris remains vigilant in pushing the limits of the sport class. I will sum it up like this, this machine is a winner, and despite the insane heat and beating we put on the machine, it responded perfectly in every way including operating temperature. We can’t wait to build this beast up and play with it some more! 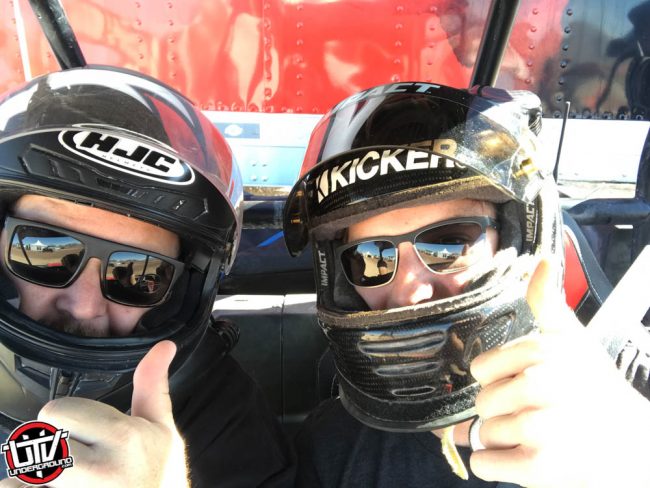 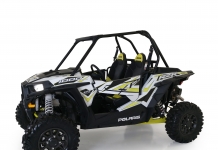 Enter Now to Win This Polaris RZR From Dream Giveaway 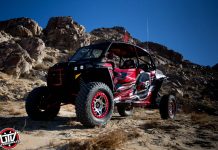 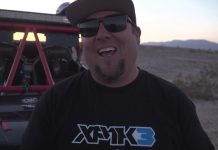 Behind The Scenes: UTVUnderground Dynamix BREAKDOWN