About a year and a half ago Honda invited us to their test facility in Northern California for a first look at the all-new Honda Talon. We were really impressed with the vehicle right off the bat. It had an amazing fit and finish and things were really well laid out.

It had a unique approach to the suspension system and probably most notable was the DCT or dual-clutch transmission that Honda came up with – a first in the class. Honda essentially did away with the need for a belt and in doing so, they created a vehicle that was a step forward in the progression of the modern sport UTV. They certainly weren’t the first to scrap the belt. The YXZ1000R SS XT-R features a sport paddle shift with an auto clutch and a 5-speed sequential transmission. But the Talon uses a high-performance parallel-twin, UniCam engine, and six-speed DCT transmission. Honda’s UniCam works with the intake valves via shim-under-bucket, but the exhaust lobes actuate the exhaust valves via rocker arms. Huh? Just trust us these guys are engine wizards and they make magic out of molasses. The Talon shares the basic 999cc engine platform that also powers the Pioneer 1000 and the Africa Twin. We loved the little car and loved the price even more. Sub $20K! Not bad for a kick-ass UTV.

Now – when Honda announced the 4-seat model we had to get our hands on one! They were kind enough to deliver, and we’ve spent the last seven months beating the crap out of this car. We’ve taken it to Moab, Vegas, and even pre-ran the UTV World Championship course with it in Lake Havasu… basically all over the Southwest United States. We’ve loaded it to the hilt with four full-grown men and women and stacked gear all over the roof and bed of this thing. We’ve essentially put it through its paces and overall the car’s handled really well.

Both cars sport the six-speed automatic dual-clutch transmission, allowing drivers to choose between a full manual mode or a fully automatic mode. Plus the addition of a sport mode increases the fun shifting at higher RPMs for a spirited old performance driving experience. The four-seat Talon has the same paddle shifting system as the original two, which we love.

We love the interior of this car. This is such a smooth, nice, well-designed vehicle on the interior. It’s comfortable on the body. There are no jagged edges where you slam your knees or your legs into one of the things that we really love about the Talon is that it’s elevated the discussion about the value of what users should get for $20 – $22K. If you go back and look at some of the other OEM cars in that price range, just a few short years ago, they weren’t nearly this well finished at that price point. And that’s good for all of us. Essentially, Honda’s raised the bar at the medium range, and that’s going to push all the other OEMs to offer more at this price point.

One thing we did notice is that in these DCT cars, it is possible for your foot to hover over the gas pedal at such a position that you end up falling into a herky-jerky mode. Meaning as your foot presses the accelerator and the car begins to accelerate, it then rocks back and forth, trying to find the best gear possible to propel you forward. This wasn’t such a big deal for us on longer smoother trails. But when we got into the whoops and the chop, it really made for a herky-jerky ride for some of our passengers.

The other major takeaway was that the power to weight ratio diminished pretty radically when you start adding weight to this car. Fully loaded with four male adults and our gear and things were a little bit slow going, and we felt a little bit nervous about climbing some of the steeper trail systems in Southern Nevada and Arizona. It’s not that the Talon ever quit on us, or we had any mechanical issues. It just felt a little bit underpowered for what we were trying to do with it. But again, we’re talking about a base model four-seat vehicle in the $20,000 range. And about 80% of the time, the four-seat Talon ate up everything that we threw at it. It’s our bet that what Honda has sacrificed in terms of power or flashy, ad-ons, they’re going to make up with in terms of longterm reliability. Both Polaris and Can-Am have had model issues in the past, as they have been competing with each other at a fanatical pace. Meanwhile, Honda currently holds the title as the best minivan maker, the best base model sedan, and the best portable generator in the world. They are engine mavericks.

Now, if you’re interested in racing either a two or four-seat Honda Talon you gotta check out jsportusa.com The guys over at J Sport are really pushing the envelope on transforming the Talon from a trail-ready machine to an off-road racing machine. We need more of the OEMs in off-road racing, and it’s awesome to have Honda participate in that going forward. (Tesla, John Deere, Robby let’s go!)

A heritage of reliability

This may also be a perfect machine for somebody who’s looking to buy a UTV now and keep it for the next 10 years. Don’t forget, Honda is known for durability and the lifespan of their products. It doesn’t matter whether it’s a Honda Civic or minivan….even the generators, everyone knows Honda
means quality, and there are a million places that you can take these vehicles if you need repairs and service done to them because of the sheer size of Honda as an organization. So if you’re looking for a dependable machine this is a great unit to look at. Big Red is on the scene!


We love the interior of this car. This is such a smooth, nice, well-designed vehicle on the interior. It's comfortable on the body. There are no jagged edges where you slam your knees or your legs into

This may also be a perfect machine for somebody who's looking to buy a UTV now and keep it for the next 10 years. Don't forget, Honda is known for durability and the lifespan of their products.


Our only gripe is that the paddle shifters aren't attached to the steering wheel itself.

One thing we did notice is that in these DCT cars, it is possible for your foot to hover over the gas pedal at such a position that you end up falling into a herky-jerky mode.

The other major takeaway was that the power to weight ratio diminished pretty radically when you start adding weight to this car. Fully loaded with four male adults and our gear and things were a little bit slow going. 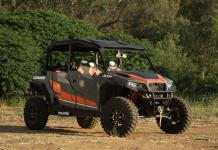