AJ Jones is just one stage away from winning both UTV-based classes of the Dakar Rally in consecutive years. After taking last year’s top honors in T4 SSV, Jones sits more than 54 minutes ahead of fellow Red Bull Off-Road Junior Team driver Seth Quintero in the overall T3 Lightweight Prototype rankings after today’s penultimate test, featuring 154 kilometers of special stages from Shaybah to Al-Hofuf. Jones’ ninth-place finish on stage only gave up roughly 10 minutes to Quintero, who was third on the day.

Top honors on the day once again went to Mitch Guthrie Jr., who scored his fifth stage win of the year. Just like yesterday, he headed up a top three separated by under a minute; this time, it was Ignacio Casale in second, 50 seconds behind Guthrie, and Quintero 57 seconds back in third. Much like Quintero’s torrid pace last year, issues that took him out of the overall running in the first week haven’t dampened Guthrie’s ability to outrun the field on any given day.

But while the T3 podium seems fairly well set with Jones, Quintero, and Guillaume De Mevius fairly secure in their respective spots, T4 SSV remains one of the closest-matched divisions in the event. While various struggles have whittled down the fight for the lead from four racers within 10 minutes of the lead to two, rookie Eryk Goczal continues to take the fight down to the wire with class leader Rokas Baciuska.

Today, Goczal erased more than half of Baciuska’s overall lead with a Stage 13 win, cutting it from 7:43 to 3:24 with just one stage left; his father Marek remains third overall, but as he’s nearly 20 minutes behind his son, chances are that it’ll be the 22-year-old Baciuska or 18-year-old Goczal representing the youth movement atop the final standings.

Coverage of today’s Dakar Rally action will debut on Peacock at 6:30PM ET. Tomorrow’s Stage 14 brings racers to Dammam for the finale, with two major challenges for racers looking to make up time. The first is that the special stage is only 136 kilometers long, the second shortest of the rally; the second is that racers will start in reverse order of the overall standings, meaning that leaders will have well-established tracks ahead of them to use to push their pursuers. 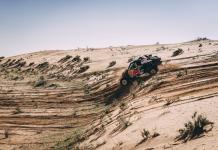