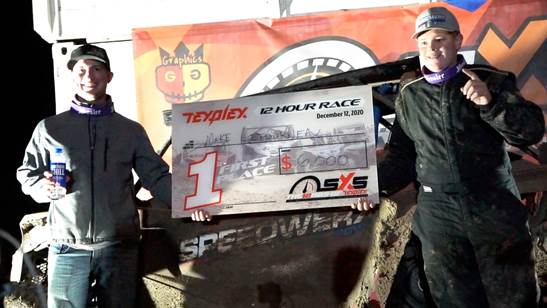 The Speedwerx/TraLo Motorsports/Arctic Cat team took on the 12-Hour Endurance Race at TexPlex Park in Midlothian, Texas in December. This race was the first of its kind for the team so there were a lot of unknowns going into the event, but they felt prepared.

The races started at 7 a.m. and ended at 7 p.m. with the winner being decided by who had the most laps completed within the allotted time. The No. 97 Pro class entry Wildcat XX driven by Jack LeTourneau and Jeremy Houle started in 18th and the No. 99 Sportsman division entry driven by Mike LeTourneau and Jake Jorgenson started 40th. The start was a traditional Lemans style with a little twist- a team member had to run the ignition key out to the car to begin the race.

The team’s strategy was to just ride it out early, let things settle into place and switch drivers every fuel stop. This worked great for the No. 99 car as it was battling for a podium position early on. The No. 97 car experienced an oil cooler leak that caused several other issues, forcing them to pit several times early in the race. Once they got going again, they were in 20th position but running lap times equal to or better than the top five. Nearing the four-hour mark and passing for 10th place on track, the No. 97 had another issue as some residual oil had seeped into the cooling fans, shorting them out and resulting in the car overheating. They lost valuable time getting back to the pits and once on the track again, they were back to about 20th position. The race went much better for the No. 99 team as they were running strong up front and battling for first place.

At the halfway point of the race, the No. 99 led the Sportsman class and the No. 97 worked back towards the front of the Pro class. Once again as the No. 97 neared the top ten, the team suffered another setback when they ran out of fuel just short of the pits, dropping them back in the field. As the day grew longer, the No. 99 was solidly in first place and running a comfortable pace to avoid any unneeded risks.

As nighttime closed in, the No. 99 was nearing a full-lap advantage on the rest of the Sportsman class and the No. 97 had climbed back into the top ten in the Pro class. Still hungry for more, the No. 97 team was focused on making up for lost time and at times, ran the fastest laps on the track. When the checkers flew, the No. 99 team had won the Sportsman division by a lap over second place and the No. 97 team took a solid seventh-place finish after losing well more than an hour with the setbacks throughout the day.

This race was a real test for both man and machine; the drivers, cars and crew were tasked to do things they had not done before, battled through unexpected setbacks and considered the results a success for their first-time running this type of race. It was a great way to cap off a successful 2020 racing season!

The Textron Wildcat XX Is Here..Finally!

The Textron Wildcat XX Is Coming…