Austin Jones joined Casey Currie as the second-ever American to take the overall SSV victory at the Dakar Rally after reversing a deficit to teammate Gerard Farres on Friday’s 164-kilometer special stage finale from Bisha to Jeddah. Jones, whose differential issues on Thursday’s Bisha loop opened the door for Farres to briefly claim the top spot, managed a third place finish on stage—but at only 5:47 behind stage winner Rokas Baciuska, and with Farres more than 10 minutes behind, it was just enough to secure his first overall win after a second place finish last year.

Farres remained in second place, matching his best career result in the race across 15 years of motorcycle and SSV competition, in the slimmest margin of victory in the event at just 2:37 back. Baciuska’s second stage victory in three days allowed him to jump past Marek and Michal Goczal to finish third in the overall rankings. All five finished within half an hour of the top spot, and sixth place Rodrigo Luppi de Oliveira, who himself led for much of the rally, was only 55:44 adrift himself.

The margins in the emerging Light Prototype class were a little less dramatic. Seth Quintero extended his record for most stage wins in a single Dakar with 12 in the finale, beating Sebastian Eriksson to the finish by 1:23 to button up a nearly perfect event. Across those stage wins, Quintero beat eventual overall winner Chaleco Lopez by nearly two and a half hours, in what would have been among the largest margins of victory in this year’s rally. Even with the time he lost stranded during Stage 2, and 10 hours of penalties on top of it, Quintero still placed 16th overall after falling to as far back as 38th.

Lopez’s third Dakar triumph in four years—the other two coming in the SSV category—will officially go down as a 51:28 margin of victory over Eriksson, his EKS South Racing teammate. Quintero’s Red Bull teammate, Cristina Gutierrez, completed the podium at 4:34:43 behind.

Coverage of Stage 12 of the 2022 Dakar Rally will air on the Olympic Channel tonight at 8PM ET, with extended highlights also streaming on NBC Sports digital platforms. 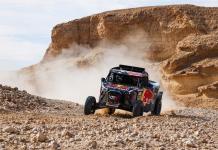