Home All Stories Best in the Desert UTV Title Chases Get Tighter as Terrana, Row,...

While Best in the Desert’s UTV divisions wouldn’t quite crown their champions last weekend in the King Shocks Laughlin Desert Classic, that didn’t make the action any less intense as drivers looked to fight for every remaining point in their quest for a class championship. When all was said and done, Joe Terrana would post the top overall time with a UTV Turbo Pro class win, while Brayden Baker (UTV Trophy Unlimited) and Josh Row (UTV NA Pro) would join him as winners as the series prepares for a title showdown at the World Hare & Hound Championships in two weeks.

Terrana’s 2:11:41 was 26 seconds clear of second place Bruce Binnquist, who backed up the fastest time in California 300 time trials the week before, while Kolton Hustead completed a Turbo podium that was separated by just under a minute and a half. Fourth place Dustin Jones, who came into the weekend second in the BITD standings, managed to chip away at Vito Ranuio’s points lead after Ranuio finished seventh. They’ll likely settle the Turbo championship among themselves in the finale, after Jason Murray finished two laps behind in 16th in class and Matt Burroughs and Phil Blurton didn’t race in Laughlin.

Defending NA Pro champion Josh Row and Max Eddy have been the class of that field all season long, with Eddy up by four points but each outscoring the other twice coming into Laughlin. Row struck back with a win in Laughlin, finishing more than two minutes ahead of second-place Eddy and third-place Kaden Wells, as the margin gets even tighter heading into Tonopah.

While Trophy Unlimited had a decent title fight of its own coming in thanks to the efforts of Dan Fisher, Trevor Leighton, and Donald “Cowboy” Cerrone, Brayden Baker played championship spoiler over the weekend with a dominant, nine-minute victory over Cody Bradbury and another five minutes in hand over third place Ken Criswell. Of the incoming top three, only Fisher completed all eight laps; Leighton took a DNF, while Cerrone finished seven of them to place ninth. Chris Blais backed up his class victory at the California 300 with a fourth place finish, keeping him within reach of the title if Fisher or Cerrone struggle in the title decider.

Joining Terrana, Row, and Baker as class winners in Laughlin were Super Stock winner Mitchell Alsup and Sportsman winner Kaden Isabella, each of whom were top 10 in their group despite competing alongside the Turbo Pro class. In all, 79 UTVs took on two days of racing at Laughlin, with the three premier classes each drawing 18 or more entries.

After the World Hare & Hound Championships in Tonopah, Best in the Desert takes a two-month break before starting its 2023 season with its traditional events in Parker, Arizona. Unlike past years, however, the Parker 250 for UTV, motorcycle, and quad classes and Parker 425 for cars and trucks will be run on the same weekend, January 4-9. 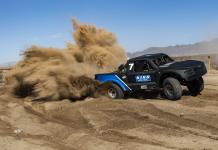