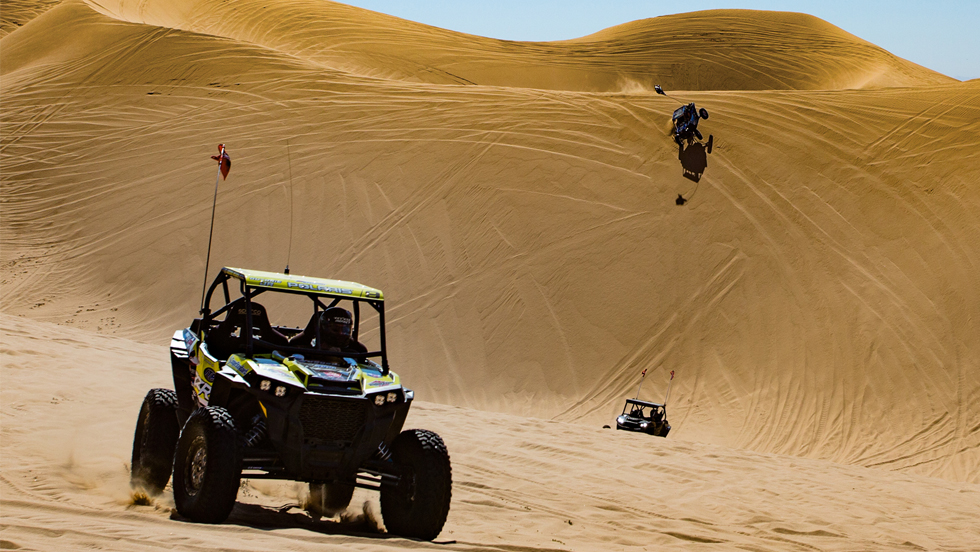 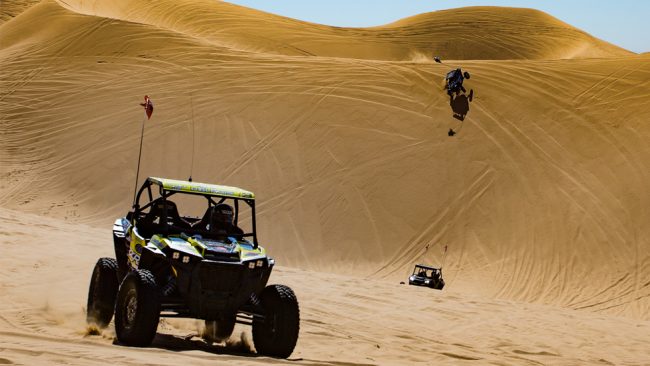 Camp RZR in Glamis has become a can’t miss event for anyone in the off-road world. Knowing this event was approaching fast I started looking at media for the upcoming 2017 even. Ironically, a few days later I would receive a call from Jeremy Merrell at the UTV Wolfpack asking me to travel with them and photograph the event. Knowing this was a “fun” event and not a high-strung race I wasn’t sure what to fully expect, but I knew to prep for a fun & fast time in the dunes of So-Cal.

The day came to load up the trucks, RV’s and pacific coast trailers. We met up at the UTV Wolfpack headquarters to begin the process of loading up what seemed like 100 rigs and RZRs for the event. We got on the road and a few hours later arrived at Camp RZR where we met up with the UTVUnderground.com & Rockstar Energy compound to set up camp. Even though it was dark, just by looking around I could tell just how big this event was going to be. The compound that UTVUnderground.com had just for camping was at least 80 rigs deep. 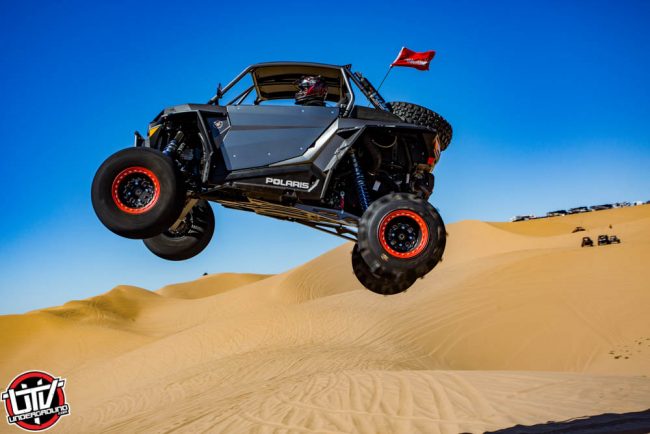 We got an early start the following morning and hit the dunes for photos. We stopped on a high point and when looking one direction it was nothing but dunes for as far as the eye could see. In the other direction, a procession of vehicles were driving in, filling up Camp RZR and the Glamis flats surrounding the vendor row area. This process would take place all weekend long. Never have I seen so many off-road enthusiasts congregate into one area. It was like off-road Woodstock.

We traveled back to camp to get ready for the first of many group rides. We reloaded and jumped in line with about 30 other machines. After cruising the dunes for 30-40 minutes we reached a location behind Osborne’s Lookout, a popular spot for those traveling through and by the dunes to stop and overlook the enormous Glamis area. We all parked our machines atop one of the dunes and before long people like RJ Anderson, Mitch Guthrie Jr., The Merrell brothers and many more come up the other side and “sent it”. The jumping took place for a while, one group would hit this natural sand jump while others crested a large dune adjacent to the landing. Pretty soon, regular enthusiasts were stopping in to watch and / or hit the jump themselves. I shot photos alongside the UTVUnderground film crew also known as Mad Media. 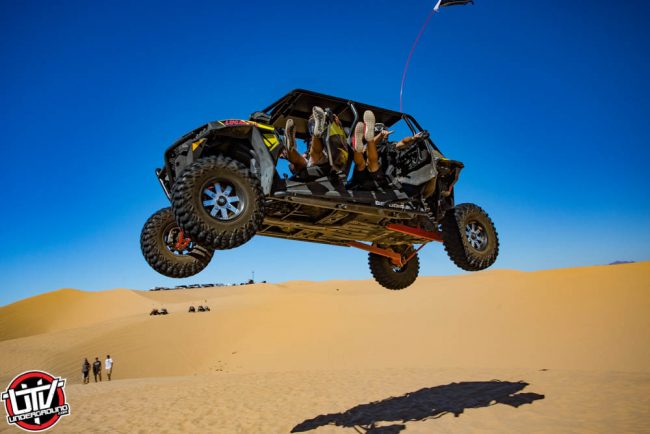 After watching these cars flying through the air for a hour we decided to head back to camp to check on the UTV Wolfpack / Rockstar Energy booth and to walk around Camp RZR. As we got to the entrance I was amazed at how many people had filled Camp RZR and how may UTVs, sand rails, and other off-road vehicles were filling the parking lot. As we got inside the energy was high, people running all over to sign up for the 10 RZR giveaway Polaris was putting on, the high energy of the Polaris staff was keeping everyone lively and the free cans of Rockstar helped too. As the day came to an end we headed back to the compound. I was thinking we were just going to BBQ and relax but there would be no chill around these guys. As we pulled up another camper had arrived, it was everyone’s buddy Cecil from Grid Off-Road who had a spread of food that was fit for kings. Fresh sushi appetizers, crab legs, prime rib and all the fixings were being served. I couldn’t help but trip out on this feast happening in the middle of the sand dunes!

After 150 people came to our camp to eat the best food you will ever eat in the desert, I took a look around and noticed that everyone within this compound was congregating together, listening to music and just genuinely having a good time. The party went on what seemed all night long. 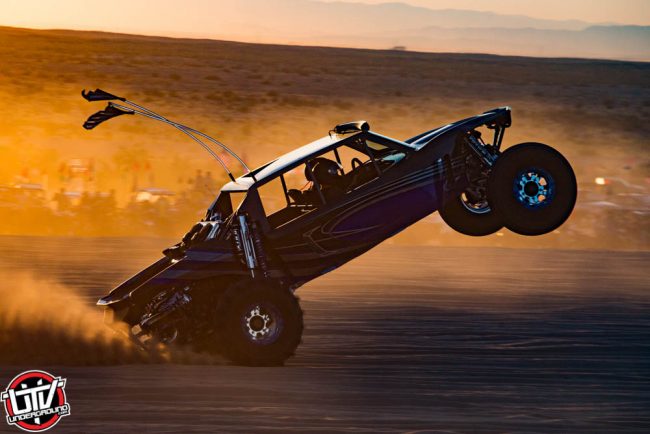 As the weekend went on it never ceased to amaze me. The parade of cars and people and a lot more fun never stopped. It was cool to see the racers, enthusiasts and companies all come together every night to hang out and have fun.

During the final night of Camp RZR, people stood shoulder to shoulder waiting to see if they won a RZR. Music was pumping, the crowd was yelling, fireworks were flying. In total Polaris estimated around 17k people attended the final night festivities. After the RZRoake contest and giveaways were complete, we headed back to the compound and as we got there I looked over and saw the band “The Original Riot” setting up a stage within the UTVUnderground compound. Cecil once again pulling out a 12-hour smoked brisket, pulled pork and a lot more fresh sushi. Grabbing our plates and crowding the stage listening to music, having a couple drinks and good laughs with great people. Camp RZR 2017 was an event I will never forget and will have stories for a lifetime. 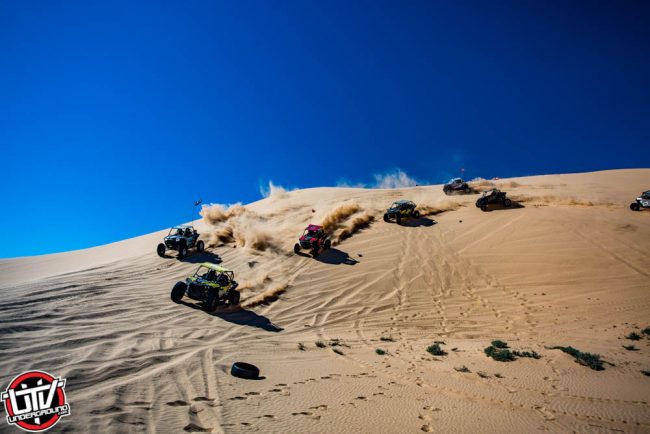 Huge thank you to the UTV Wolfpack team for the huge hospitality and the invite. Also to Polaris for putting on this amazing event. Big thank you to UTVUnderground for organizing such an awesome night time scene and camp. I Can’t wait till next year.