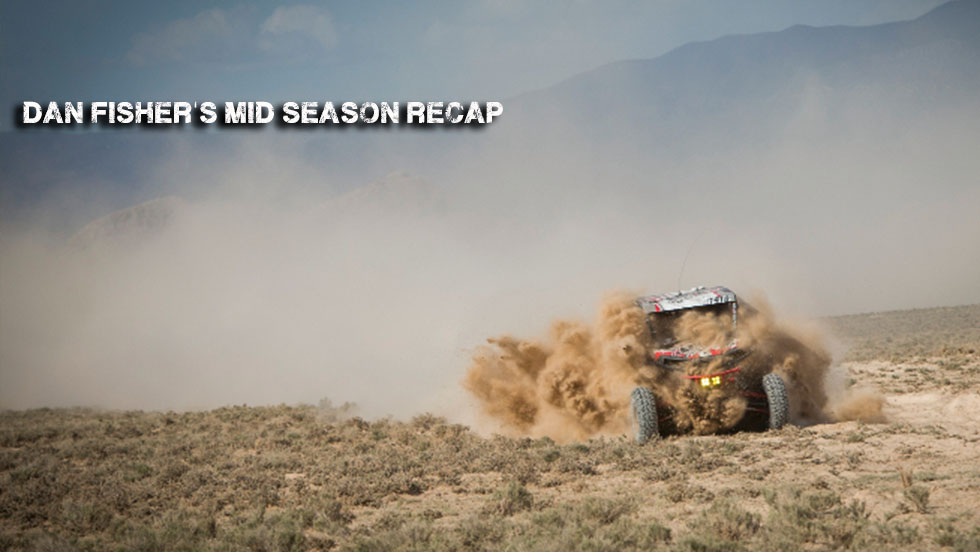 The (BITD) Racing Association is an American desert off-road racing association. It is operated by Casey “Booya” Folks and it is based out of Las Vegas Valley” Las Vegas. BITD runs the Vegas To Reno, The longest off road race in the United States and since 2012 is the sanctioning body of the Mint 400. When it comes to high level off road desert racing BITD is it. This is where man and machine pair to battle the elements for ultimate bragging rights.

The BITD is a 7 race series that is help in the western Nevada desert. The UTV field is growing year over year and in some cases been the largest class in the race. Many of the cars racing (upwards of 15 machines) were built by Dans company Lone Star racing. Much like everything Dan does in his life he decided to build his own Polaris RZR and race. 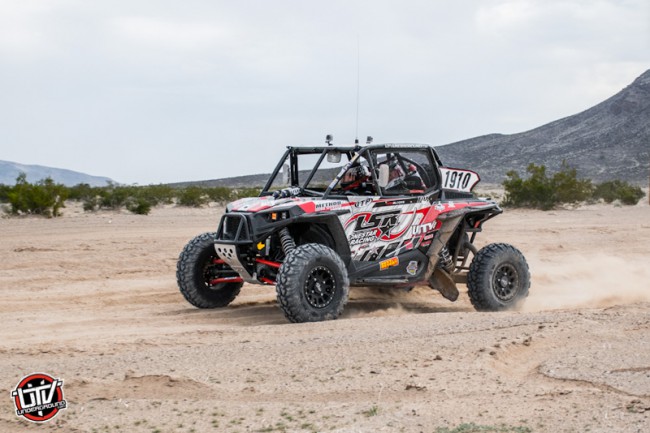 Parker 250 is the season opener. Dan would be running 1910 Lone Star Racing Polaris RZR he built for himself in 2014 again in 2015. The goal for many in the off season is to work out bugs in a new car. Dan played it smart and stuck with his proven machine for 2014. He spent the off season making things better, testing the shocks, making sure issues from last season where behind them. 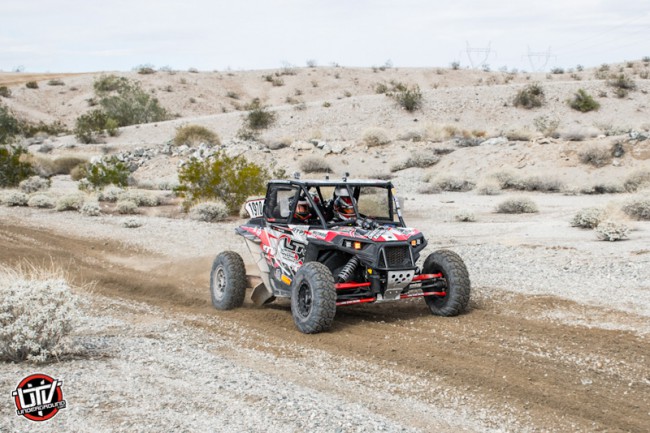 The 1910 rolled in Parker fresh, new tires, new shocks, new suspension and a full prep. She was ready for battle. The green light flashed and Dan dropped the hammer and roared off into the dust. 55 UTV’s would start the season opener and Parker is know for holding dust in its valley. As the morning sun rose the dust seemed to get thicker. Visibility during sunrise is almost zero but the 1910 charged on chasing blue lights into the dust. Around RM 230 the 1910 would fall victim to an engine failure. This is a failure you cant plan for. Starting off the 2015 season with a DNF is not how Dan saw his year starting out. BITD recovery pulled the 1910 back to the pit and the team loaded her up and headed home. The next race was a month away in Laughlin. Prep starts the day you get back from the race.

For years UTV’s have been a side show, often over looked by the desert race community. One day the owners of the Famed MINT 400 sat down with UTVUnderground.com and created a concept that will forever change UTV racing. The new format was a UTV specific race for both Short Course and Desert. Till now both of these disciplines had been completely separate. Lone Star Racing had a large presence in desert racing and many of their customers would be at this event. They wanted to support the event and customers so they jumped in by becoming a sponsor and displaying product at contingency. 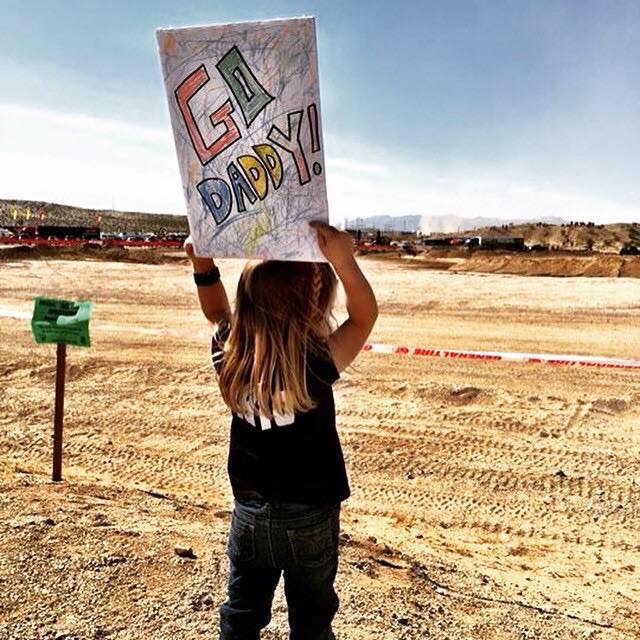 One thing totally different this race was the promoter hosted a “Family Fun Run” the day before the race. Most racers would take this opportunity to pre-run the course in a stock machine and get a feel for the terrain. 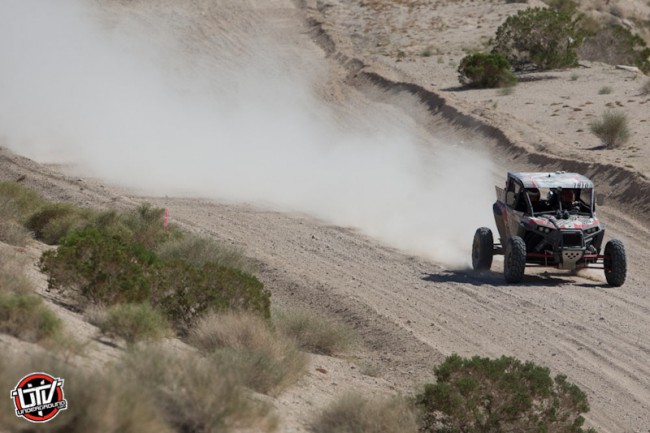 The morning of the race Dan was a little nervous. For the first time they would start with a dead engine (key off) and it was land rush style. Sitting at the line you start running things through your mind, “did I tighten the lugs, we have fuel right, focus, focus,” then all a sudden the first row takes off. 1 minute later the second row shoots off into the desert. Your hands shaking, the flag drops……. you twist the key and floor it. The roar of 15 UTV’s try to break you, you feel behind but by turn 1 you shoot into 3rd spot and your in race mode. The infield was a nightmare, the dust had settled and visibility was a major issue. This race had a unique blend of short course and desert, Dan had very little experience on a track so he was forced to play it safe and hope to make up time in the desert. The LSR Pit crew was putting together care packages with tools and parts for people having issues. When Dan pitted he would pick up the parts and haul them into the desert to support his guys. John Melvin had some clutch issues and Dan was able to take out spare parts and tools and get him going again. Overall this was Dans favorite race of the season. His family and his friends where all together doing what he loves. 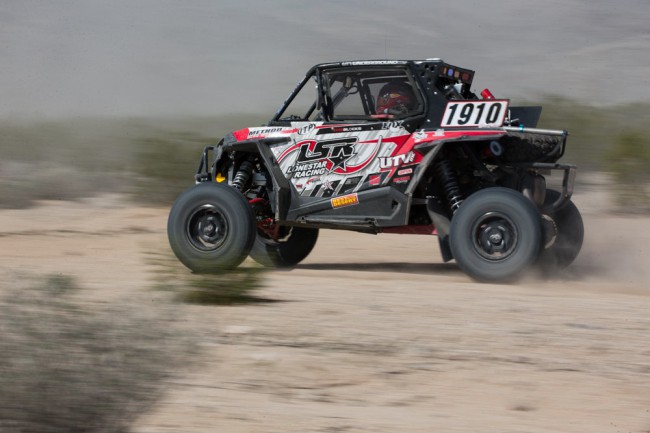 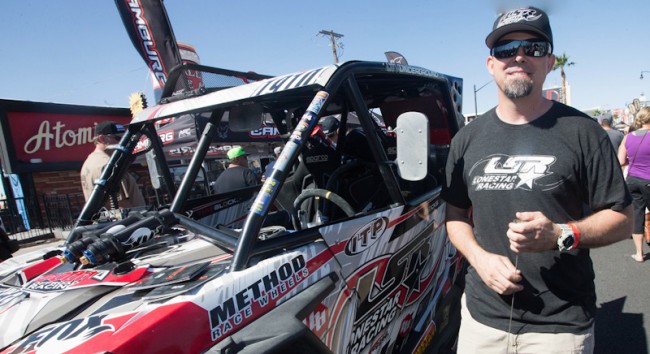 The storied history of the Mint is steeped in celebrity, drama and excitement as the city of Las Vegas itself. The Mint 400 has held the title of the toughest, most spectacular off-road race in North America since 1967 when it was first run. The race was created by Norm Johnson who was race director through 1974 and a participant from 69 to 82. Initially the race was a public relations event promoting the Mint Hotel’s annual deer hunt. but what started out as hotel promotion soon grew into a legitimate desert race. The second year it was run, Norm enlisted the help of his friends, famed race car drivers Mel Larson and Parnelli Jones. With their endorsements and a guaranteed prize purse of 30,000 the participant list grew exponentially. Entrants in the event were world wide and included some of the most well-known names from all racing genres as well as the television and motion picture industry. Indianapolis 500 winners Parnelli Jones, Al Unser, Rick Mears, and Rodger Ward; off-road champions Mickey Thompson, Ivan Stewart, Jack Flannery, Walker Evans; international off road competitor, Rod Hall; power boat champion Bill Muncey, movie- and television stars James Garner and Steve McQueen; Comedian, Mort Sahl; Astronaut, Gordon Cooper, are among the many racing and entertainment luminaries who competed in the Mint 400. 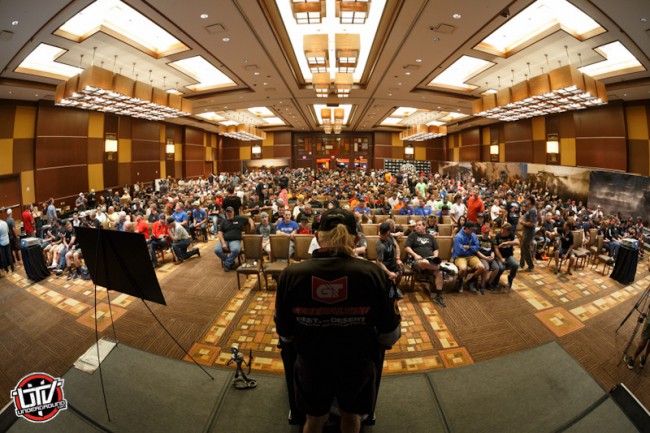 In 2014 Dan raced his first MINT 400 and 23 miles into the race is clutch failed. Not knowing what to expect Dan was not equipped to replace the part and was forced to settle for a DNF. Going into to 2015 Dan had created some goals for this race. He wanted to beat his competition but more importantly wanted to beat the MINT 400. 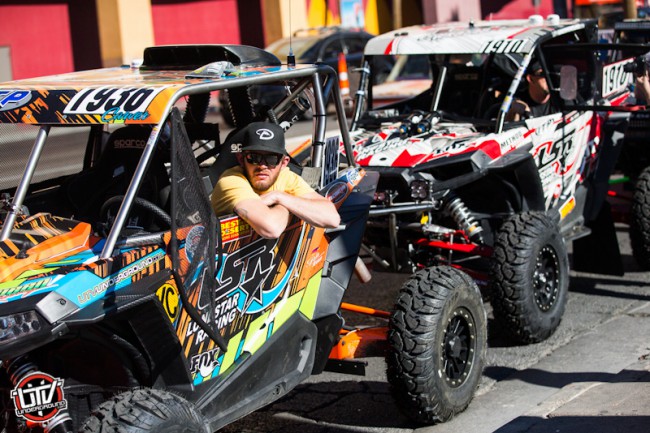 55+ of the best UTV’s in racing showed up to tackle this famed off road race. Dan knew this was his year, his co-driver Bobby from FOX shocks would hold down the right seat for the first time ever. As they sat in staging waiting to start, Dan and Bobby discussed strategy. They watch competitors take off into the darkness of the desert. Casey from BITD drops the green flag for each car. The 1910 was passing RZR’s right and left early in the race. About 12 miles out of pit 2 on our first lap they noticed the tire was flat but decided to push the car to the pit. The ITP Ultracross is a super strong tire but they MINT course was brutal. Dan was able to get the 1910 up to 80mph on a flat tire. Bobby got out and changed the rear tire. He noticed the other rear tire was smoking and also flat. They were forced to limp into the pit on a flat. The MINT 400 course had struck early, two flats by pit 1 and they still had 2.5 laps left. Came into main pit after finishing lap one and learned they were still sitting like 8th so after a quick fill up off for lap two. Lap two was short, after a few miles the clutch come apart creating a lot of vibration. So the car would still drive but had someone from Best in the Desert escort me back to main pit for repair. Once fixed they set out to finish strong. Dan and Bobby kept 1910 together and finished a respectable 12th place. 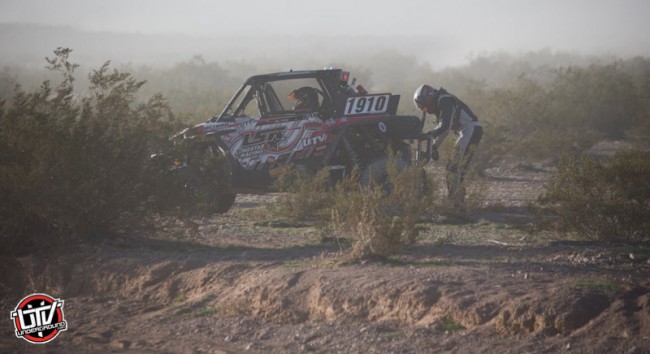 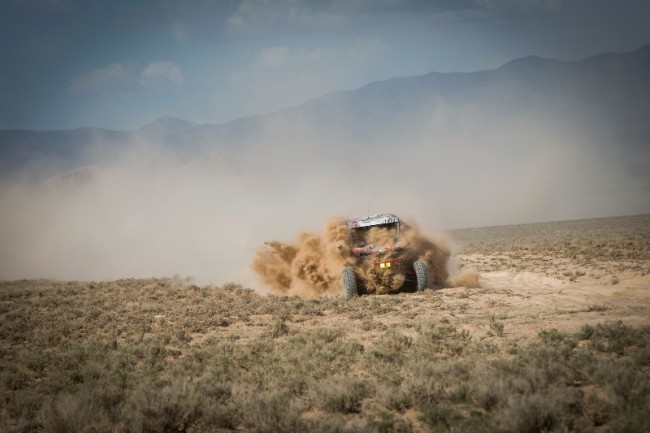 Silver State 300 is a historic race in a beautiful part of Nevada. This is a very fast paced race, forest roads, sweeping turns and long straights this is more like a rally. 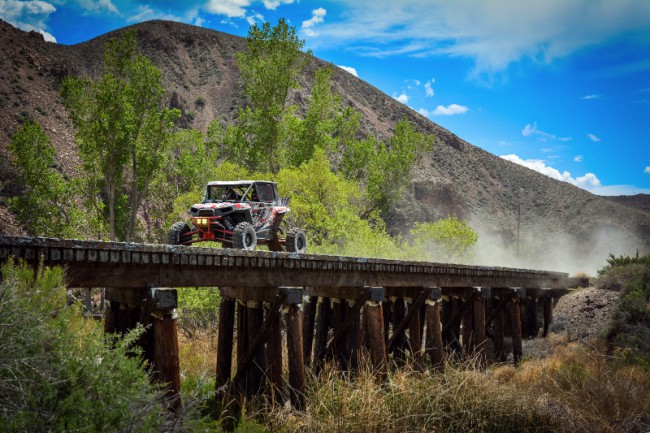 Dan Fisher and co-driver Shannon Miazga arrived late to staging. Around 9:00am the flag dropped and it was go time. At RM50 the 1910 was up in the front (5th place) just over a minute behind LSR driver Branden Sims. Things where running smooth till they got up into the trees, the tight roads and all the transitions got to the co-driver. For the next 20 miles Shannon got sick till pit 2. Even with things looking bleak Dan pushed the 1910 into Pit 2. A quick Co driver change at pit 2 left and was not passed. Trying to preserve his lead Dan ripped back into the desert. This left little to for the new co-driver to get strapped in. After a few miles they were forced to pull over and secure Health into car. This cost them 5 positions which dropped us back to 14th at RM100. Heath was on his game which helped to catch UTV after UTV. By RM150 they moved up to 9th and by RM200 into 6th. All was going great but this is desert racing rarely does anything come easy. The last 100 miles was earned, they got a flat about 5 miles out of pit 6 so they limped into Pit 6 for a tire change. While in the pit they got passed by 1967 Scott Yancey as well as the 1921 car driven by the one and only Johnny (Lightning) Angal. They left pit 6 in Johnny’s dust. They stayed close and in his dust for close to 15 miles. They pushed so hard the headgasket failed. Coolant coated the inside of the RZR. Car temp was good so they pushed to pit 7 to have the guys QC. The pit crew checked it and decided it was worth pushing it 30 miles to the finish. All things considered a 7th place finish was a great accomplishment. The car died just feet after crossing the line. 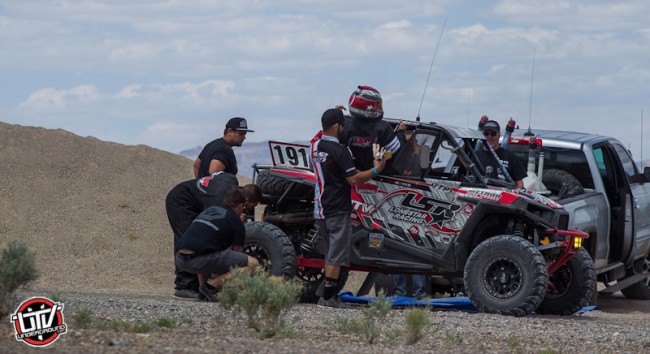 “I would like to give a special thanks to all my crew from LoneStar Racing. These guys put in so much and without them stuff like this would not happen. Also Thanks to all the companies who have been involved Fox shocks, UTV Inc, ITP Tires, Baja Designs, and Method Race Wheels. The quality and service I have received from these companies has allowed me to push my car well passed its limits with zero concerns of issues.”