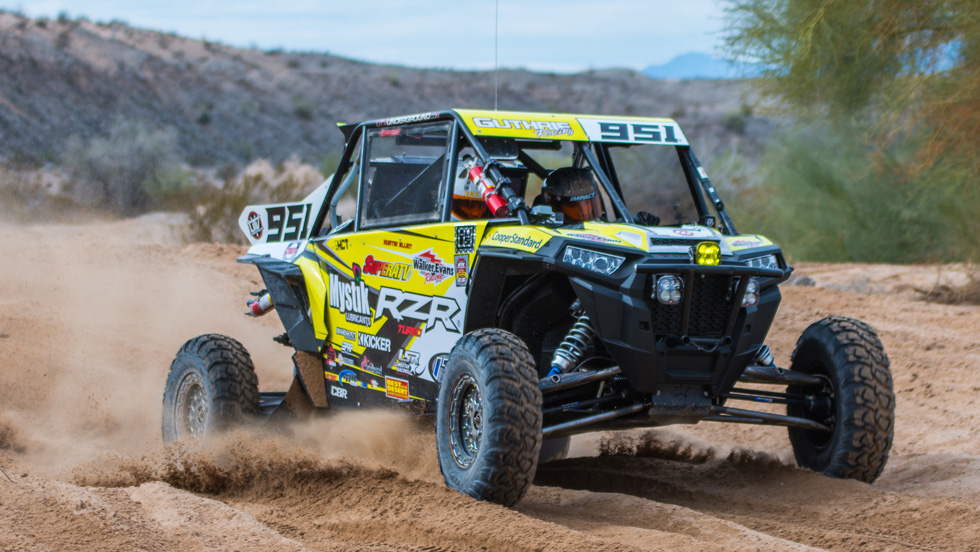 DWT drivers and riders put on a dominating performance at the opening rounds of the BITD and WORCS series winning the pro class in every event.

At the UTV Winter Nationals, Nic Granlund came out of the start with the led pack in the Assault Industries UTV Production 1000 short course race. He quickly moved into the lead and opened a good gap on the field. Nic said, “With about 3 laps to go, I looked at my fuel gauge and saw I was running low. By the last lap, I was on empty. I had to roll the dice by not pitting and go for the win. I drove just hard enough to stay in the lead and it paid off”. Granlund crossed the finish for the win in his Yamaha YXZ.

As a special prize to the fastest overall time of the combined short course events, Polaris gave a new RZR to the winner. Granlund beat out Lastra by just over a minute. Congratulations to Nic on his new UTV. In the UTV Turbo Production short course class, Garrick Lastra racing an almost bone stock Can Am X-3 came out 4th behind Queen, Sims, and Guthrie Jr.. Lastra passed Queen for third and was right behind Guthrie Jr. “I was right on Sims and Guthrie on a high speed straight away when Mitch started to swap. He crashed big time, that was wild!” said Lastra. After that Garrick worked past Sims and into the lead half way through lap 1. Once out front, Lastra put his UTV into eco mode to conserve fuel. Garrick maintained first all the way to the finish to take the win. Guthrie also took home a new Polaris RZR for his overall win in the Parker 250. The big race of the weekend was the Parker 250 with the majority of top UTV desert racers vying for the win in the opening round of the BITD Championship. DWT was well represented with drivers from both Factory Polaris and Can Am on their wheels. With names like Dustin Jones, Mike Cafro, Corey Sappington, Dan Fisher, Josh Row, Snake Livernash, Justin Elenburg, and new addition, Mitch Guthrie Jr., all on DWT Sectors, there was heavy competition for the podium spots. The pace was heated off the start in the near perfect race conditions. The course had seen a lot of rain and dust was at a minimum. Guthrie Jr. still shaking off his major crash in the short course race started 10th. He moved through the pack quickly as he picked off competitors one after another. Jones was pushing hard, but his race came to an abrupt end as he sent his car end over end in a high speed rolling section. Dustin later said, “Man, I’m just glad we are ok. That was scary, but we will be back and ready to go for the next one”. Meanwhile, Guthrie Jr. moved up to 2nd behind Branden Sims. Coming into the Parker Python at the end of lap one, Mitch was within about 30 seconds of Sims. They both pitted and Guthrie Jr. took the physical and adjusted lead with a faster stop. Now out front, Guthrie Jr. put the hammer down and opened a gap on the field. Mitch said, “ On lap 2, I knew the course and the track was perfect. My goal was to pull away a bit so I could back it down on the last lap.” At the start of final circuit, Guthrie Jr. had a comfortable lead. “Lap 3 got rough and rocky. About halfway through it started to get dark and I had to use my lights.” said Guthrie Jr. When the checkers dropped, Guthrie Jr. took the win followed by Sims and Sappington. On the podium Mitch said, “This was my first race on DWT’s and I couldn’t be happier. These Sectors are awesome. It felt great to not have to worry about any issues. Before the short course, I posted Win or Wad. That didn’t work so well, so I had to make it up this race. That’s a first for me to Win and Wad in the same day!”

Corey said, “The wheels were awesome. We could run really strong with those wheels. I was so impressed. No bent wheels, no broken wheels, it’s a miracle. I love those wheels, Douglas Wheels are the best!”

It was a great way to start the 2017 racing season and DWT would like to congratulate Mitch Guthrie Jr., Nic Granlund, Garrick Lastra, and Beau Baron on their wins!