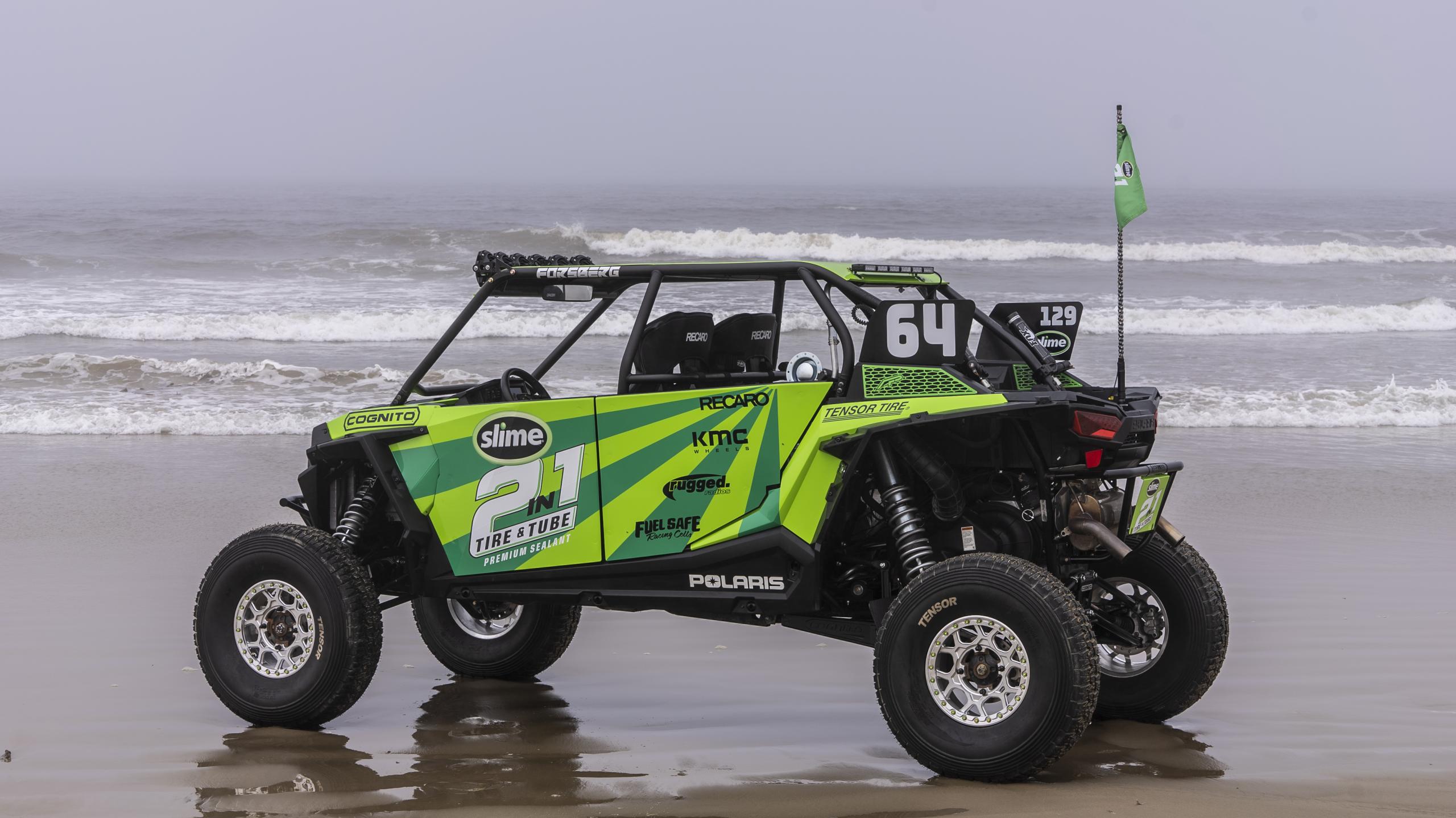 They’re best known as two of the top drivers on the Formula Drift pro circuit, but three-time FD champion Chris Forsberg and Dylan Hughes are always game to drive anything on four wheels. That’s why they teamed up with Slime to build the ultimate UTV and put Slime’s new 2-in-1 Tire & Tube Sealant to the test in one of off-road racing’s most fun challenges: this week’s NORRA 500!

In part two of this multi-part interview series, we explore how Chris and Dylan have adapted to different needs for this build from what they’re used to in drifting, changing their driving styles, and their favorite episodes of the Slime Road to Baja video series. Watch the build and the race at slime.com/roadtobaja!

Getting back to the rest of the build—Chris and Dylan, you guys have talked about Cognito and working with Justin Lambert, who is a Baja 1000 winner. So it’s hard to think of anybody really better to partner with on that side, but you’ve got all sorts of different parts upgrades on this vehicle. What was it like working with those guys? Did they offer a lot of the guidance on those parts? How much of that was you guys sort of trusting them and their experience, and how much of it was you guys taking the initiative and going hands on? Obviously you do that all the time with your FD cars, but is it something where you lean on that expertise a little bit more when you’re going into something different like this?

Chris Forsberg: We got to bend Justin’s ear pretty hard, and I’m really thankful that he was so helpful to us. Because you know, this obviously is very new to us, and even though Dylan and I can rip a car around a drift track, the preparation that goes into an off road race is unlike anything that we’ve ever dealt with. You know, usually it’s like, “Oh, we have the trailer right there.” Something breaks, you drive over to it and you fix it and you go back out. But like with this, it’s you have to build the rig to handle everything on the go. And then, with that, you need to have like some quick repair equipment. So if something does break down the chase truck can get to you quickly and get you back on track. And we’re packing certain items on the rig itself, so Dylan or I can fix it on the go. 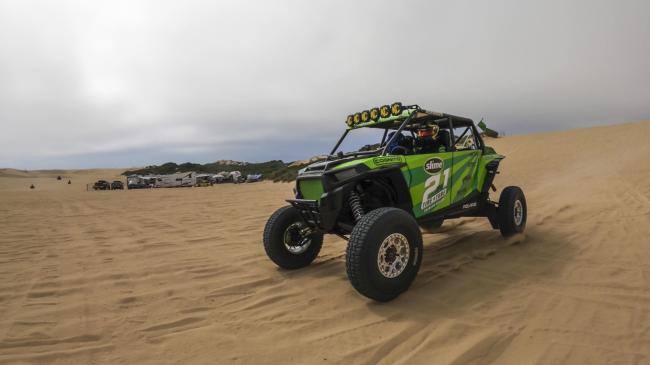 Dylan Hughes: Working with Justin kind of changed the way that we thought about things a little bit. We’re drift guys. So we’re like the most ridiculous, like turn the power up, bigger tire, better transmission, all that kind of stuff. We’re just upgrade, upgrade, upgrade, upgrade. Learning from Justin, he’s just like, “All right, well, chill out guys. We don’t need a thousand horsepower in this thing.” Because we’re like, “Turn the boost up, give it more fuel, put it on whatever, whatever…” He’s like, “Dude, this thing makes plenty of powerful what you guys are going to need to do. You can win the race on a factory engine. Don’t turn the power up because then you’re just going to start breaking stuff.” And we were like, “Oh, okay. This is interesting.” That’s just how we work in the drift scene. It’s just the most ridiculous.

So we left the factory power plant alone, but we’re bringing a bunch of spare axles in case you get a little heavy footed. You know, (he had) little tips and tricks like run the thing in four wheel drive the whole time. Like I probably never would’ve done that just because (I think) less drive train loss, go faster, only put it in four wheel drive when you have to, but at the end of the day, it sounds like those axles can’t really handle that kind of abuse for that long. So run the thing in four wheel drive, leave the power stock. But the control arms and the suspension bits, the rear sway bar piece, he knew which parts of the chassis to reinforce. We ended up welding a plate on there to get it all a little bit more strong. So just these little details here and there, it overall just solidifies it to be solid in the end.

Really, the biggest thing is just his experience. And we are so inexperienced in this field that we’re… we definitely came into it with a different approach, and Justin kind of changed the way that we looked at the whole thing, in the aspect of power the same and running four wheel drive. “To finish first, you must first finish” is kind of what he’s beating into our heads. So just make sure we finish the race, support the pieces that need to be supported, and go have some fun. So he’s been incredible in that front, and we’re really thankful for Justin. 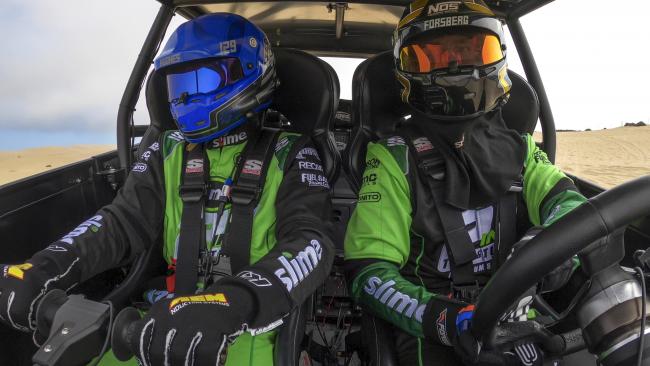 You mentioned that four wheel drive—that’s quite a bit different from what you guys are used to doing, just trying to be precise here with less sliding. How crucial has all that test time been in this vehicle for what I would imagine is almost completely changing your respective driving styles?

Dylan: 100%. Drifting is 45 seconds to a minute and a half of just absolutely balls to the wall driving: wide open, full angle, full send, full commit. And this is going to be a much different approach—that’s not how this race is going to go at all. This is going to be survival of the fittest, who’s got the toughest rig, and who’s going to stay sharpest for longest, essentially, because you have so many different objects coming at you for so long. You’re just going to get fatigued. And that’s the nature of the game. It’s just driving clean, driving smart and just making it to the end and being smart with your decisions. It’s like the tortoise and the hare type thing, like slow and steady, ideally is going to win us this race. So that’s my approach coming into it. Chris and I haven’t spoken a whole lot about that, but I mean, I think it’s safe to say that we’re on the same page.

Chris: Oh yeah. It’s a very tortoise and a hare situation. Slow and steady is going to get you to the finish line. But like you said about the horsepower, that was one of the funniest things that I didn’t even realize. I figured that we wouldn’t want to have too much power, but we were asking, “Do we have to do this or that or whatever.” But Justin was just right out of the gates like, “I have a full stock drivetrain in this winning rig in the Unlimited class.” And we’re like, “Oh, okay.” We thought in the Unlimited class they would be doing something to it. But yeah. No, it’s all about just reliability for him.

For sure. Now, there’s one thing where you haven’t really needed to break out of the drift mindset, and that’s the content creation. It’s been a lot of fun to watch all these different Road to Baja videos, everything that you’ve been doing from the build to the test to obviously getting Slimed as well. How much fun were those videos for you guys to film, and out of all the episodes that have been launched, which ones were each of your favorites?

Chris: Dumping the Slime on our heads, I think was the best part. It was cold and much heavier than I thought it would be.

Dylan: Much heavier. It’s like somebody dropping a sack of potatoes on your head. You don’t really realize how heavy the stuff is until it lands in your head from 10 feet.

Chris: Yeah. But yeah, I really liked when we got to do all the suspension bits with all the controls and stuff, that’s kind of where we nerd out a little bit. Getting that thing fully stripped down and putting all the new fresh parts on… knowing that this is race winning equipment, that got us pretty stoked up, and seeing where they tell us to reinforce and things like that. The episode where we got to physically put the arms and the wheels back on, get that thing sitting on the ground, that’s always like a big turning point in any build. So yeah, I definitely thought that one.

Dylan: Yeah, setting a rig on the ground is the best part, because then you can see the real entire package comes to life, and then you get your ride height figured out seeing that thing come on the ground. For me, it’s almost obvious to say going out and doing the first test because it was kind of like the cherry on top. We went out to Pismo, and I’d never been to Pismo. So cruising on the beach, and the totally insane sensory overload of being on the beach and then going out to some big dunes with other trucks around and just taking that thing right out of the box and just seeing what it can do. Taking it off some sweet little jumps and seeing how top heavy it is.

We’re used to very low, very wide drift cars with big sticky tires, where you can take that thing and chuck it as hard as you can into a turn, and it will stick every time. That’s not the case for the side-by-side. So being smart on how we’re testing this thing, lots of uneven surfaces so you’re figuring out your tipping points, kind of figuring out how far you can jump it, which is going to be a thing. At some point we’re going to end up hitting some jumps, I’m sure. And just kind of getting used to the power—it’s a very different power band than we’re used to in our drift cars. Just both hands on the wheel, eyes looking way ahead and just making sure that we’re staying super smart about driving this thing.

Again, it all just goes back to the tortoise and the hare. We’ve just got to finish this thing. So it’s just going to be about being smart. And the thing was an absolute blast to go out to Pismo and go play around. And I’m excited for next week’s test because I think it’s going to be a lot different. It’s going to be much more Baja based terrain, which will be good for us. Lots of rocks and lots of nasty terrain. So I think that’s going to be really good for us to, again, just learn how to be smart with the vehicle and learn what it is capable of. There’s some stuff where you see a rock or a pile of dirt or whatever it is. Sometimes you just stick your foot to the floor and it will make it right over. But there are sometimes you need to reach for the slow pedal and figuring that out for us is going to be crucial to making this thing happen. 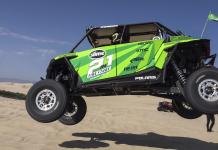 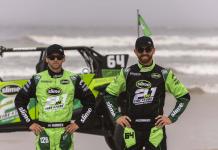 Slime Road to Baja | Part 1: From Drifting to the Desert 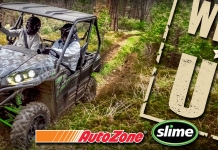 Enter to Win a 2019 Kawasaki Teryx LE from Slime