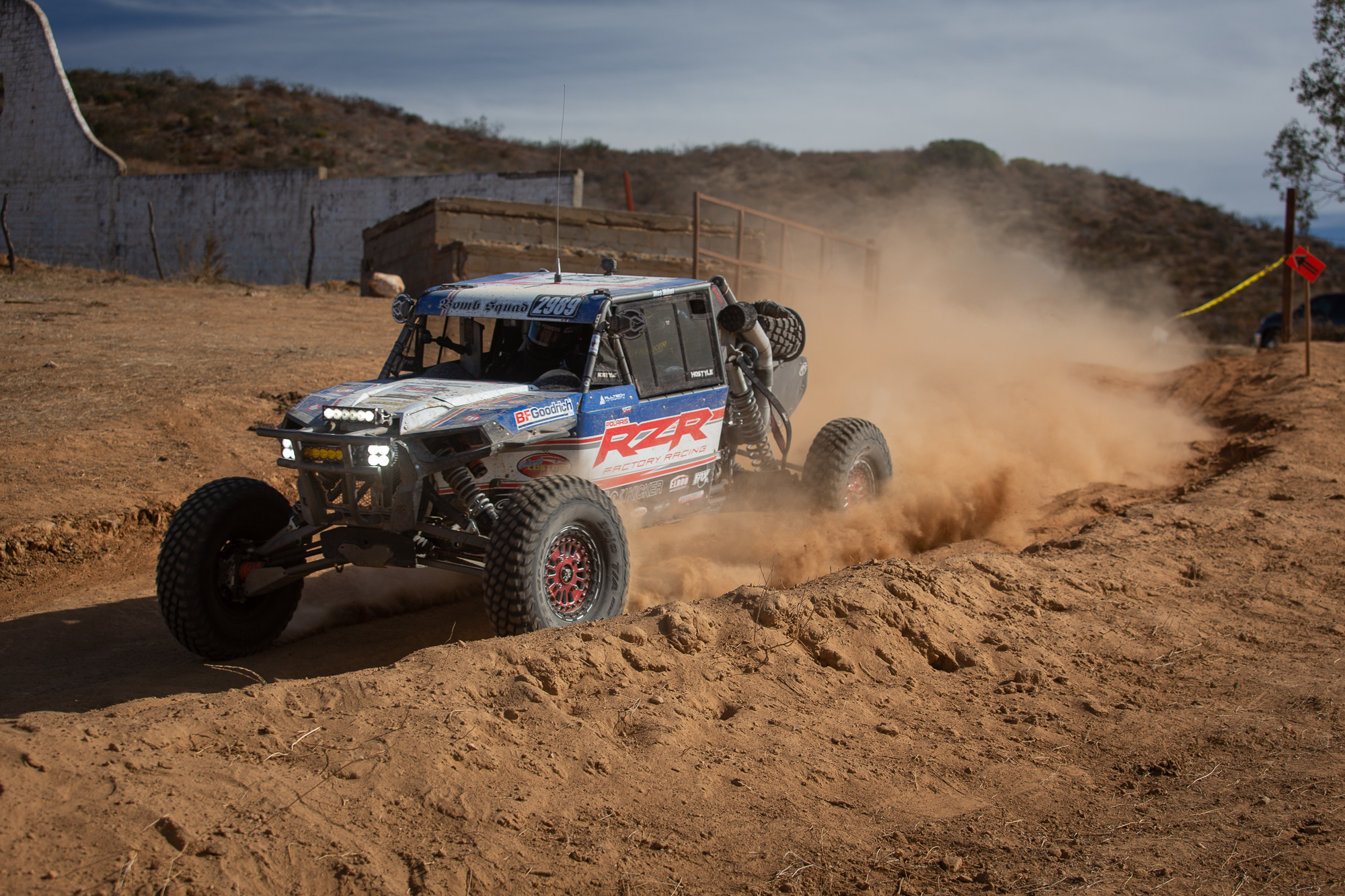 Polaris RZR factory racer Wes Miller capped off a successful season with the overall UTV win at the 53rd SCORE Baja 1000, the second and final race of the 2020 SCORE World Desert Championship, on Saturday afternoon. The victory marked the second year in a row that Miller took a SCORE Pro UTV Forced Induction race victory, after also taking top honors at last year’s inaugural SCORE Baja 400, and joins his triumph at Vegas to Reno in a superb 2020 campaign.

“In the beginning the course was super dusty, it was gnarly,” said Miller, who split driving duties with Jason Luburgh on the 894-mile course. “We hit a couple bottlenecks, but a little after mile 200 we were able to pass Jason Murray for the physical lead. We just held a steady pace and had the physical lead the entire time from that point on until we got passed when we broke a lower A-arm bolt and had to stop and fix it. We had a pretty clean race and probably should have won by a lot more, but a win is a win.”

Baja 500 winner and top UTV starter Matt Burroughs would finish second in the premier class, with Marc Burnett coming home third. Burroughs’ second straight podium was good enough to give him this year’s Pro UTV FI title, but when combined with a deep 24-car field in the class, his points total will be enough to declare him the overall 2020 SCORE World Desert Champion. Burroughs joins Wayne Matlock in 2018 as just the second driver in SCORE history to claim top honors while racing a UTV class.

Initially, the Pro UTV Normally Aspirated Honda Talon of Francisco Arredondo, Cisco Bio, and Jamie Campbell looked to not only take the class victory, but the overall win as well. However, after a time correction for missing a virtual checkpoint, the #1945 team would fall to second overall in the UTV classes, just under a minute behind Miller. Adrian Orellana would finish second in the NA class, and third overall, while Kaden Wells would take the final class podium spot over defending race winner Kristen Matlock by just over an hour.

Honda broke the tie on class wins in Pro UTV Unlimited, as longtime short course standout Eliott Watson completed his first season with the factory Talon squad with a class victory as the only finisher in the division. Watson’s time was good enough for ninth overall among UTVs in his first attempt at the race. Carolina Sanchez would take the Pro Stock UTV victory in a Can-Am ahead of Dave Davenport and Randy Emberton.

Of the 99 entries that completed this year’s event, 21 were UTVs: nine FI, six NA, three Stock, and one Unlimited. A total of 44 UTVs had started the race, with an event-high 24 FI entries, 10 in NA, and five apiece in the Unlimited and Stock classes. That left a number of huge names to look ahead to 2021 for their next Baja 1000 finish, from defending race winner Justin Lambert to former FI class champions Wayne Matlock and Jason Murray.

With the abbreviated 2020 SCORE World Desert Championship in the books, racers can look ahead to the intended return of a four-race campaign for 2021. The San Felipe 250 and Baja 500 move up to February and April, respectively, for next year, while the Baja 400 returns to September and next year’s Baja 1000 retains its traditional November date as the season finale. In the meantime, off-road fans can look ahead to ABC’s World of X Games for television coverage of this year’s Baja 1000 in the coming months.

Check out our 2021 Baja 1000 gallery below, courtesy of Ernesto Araiza!