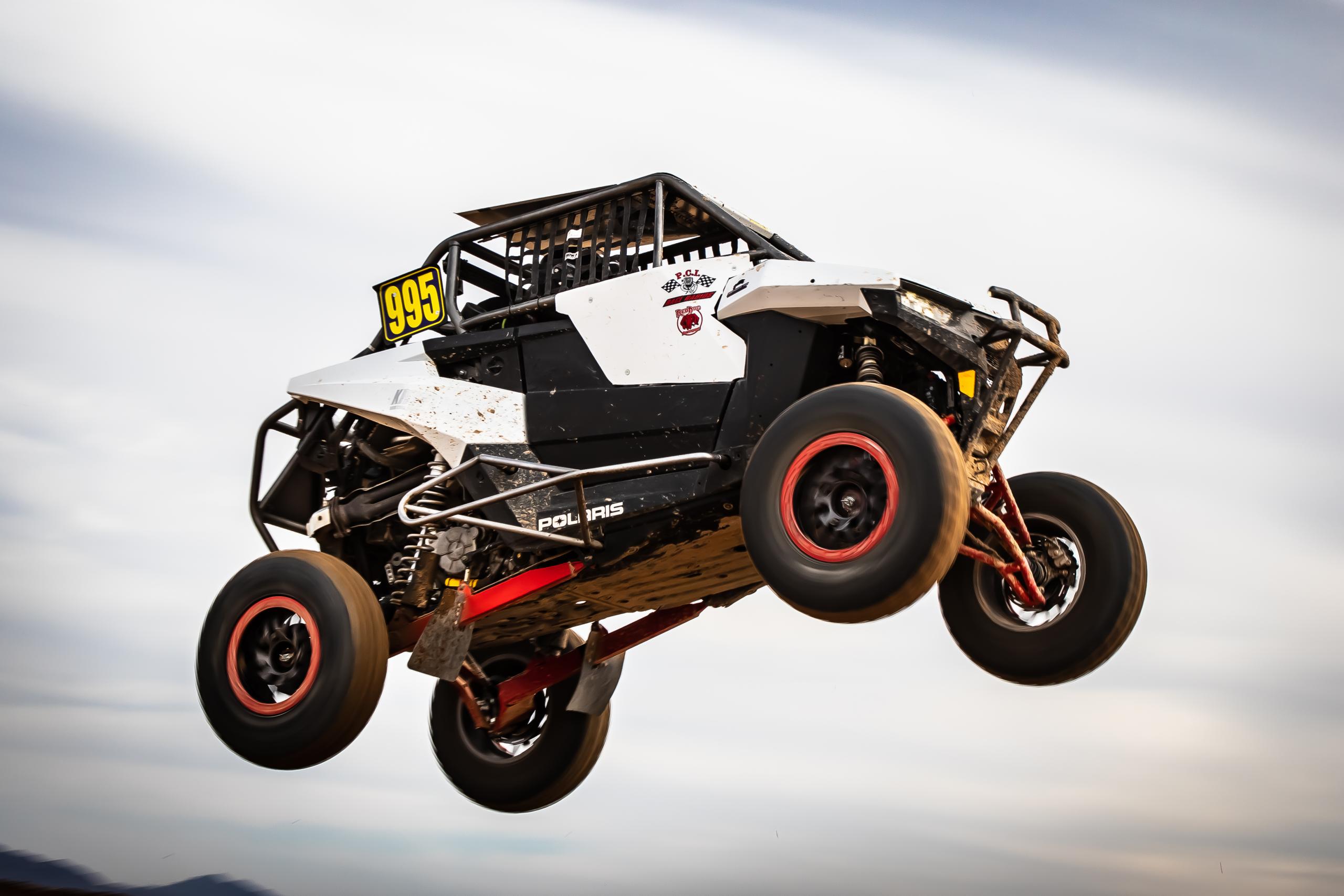 Photos and Story by KarakurtMP

AZOP Racing Rowley White RV Series presented the Blythe Grand Prix II for the fourth round of the 2021 season at Shorty’s Sport Park in Blythe, California sponsored by SinFab Racing and Arizona Color Vehicle Wrap Pros. It was a scorching and very dry race weekend with temperatures in mid-90s. The track follow much of the same of the track as the first Blythe Grand Prix of the season apart from a turn and hill or two.

First to the start line on Saturday morning were the Pee Wee Quads with 13 entries. The Pee Wee classes raced in the infield, the motocross section of the track. The overall winner on Saturday, #88 Tyler Wade, completed 21 laps with a minute lead over second place #31 Kaiden Lee and #623 Cain Llamas. Sunday’s race resulted in a slight change in podium with #88 Tyler Wade repeating Saturday with 1st place, #31 Kaiden Lee in second, and #200 Cutter Gehrts a lap behind coming in third.

Up next was a full field of 26 Pee Wee bikes to take on the infield. It was close battle for 1st between #51 Tanner Sutton and #6 Ryland Stowell. In the end, Tanner fell to Stowell by 39 seconds. Shay Anderson #45 came in 3rd a lap behind Stowell and Sutton. The following day, the podium positions remained the same. Stowell maintained P1 with a lap lead over 2nd place Sutton and 3rd place Anderson. 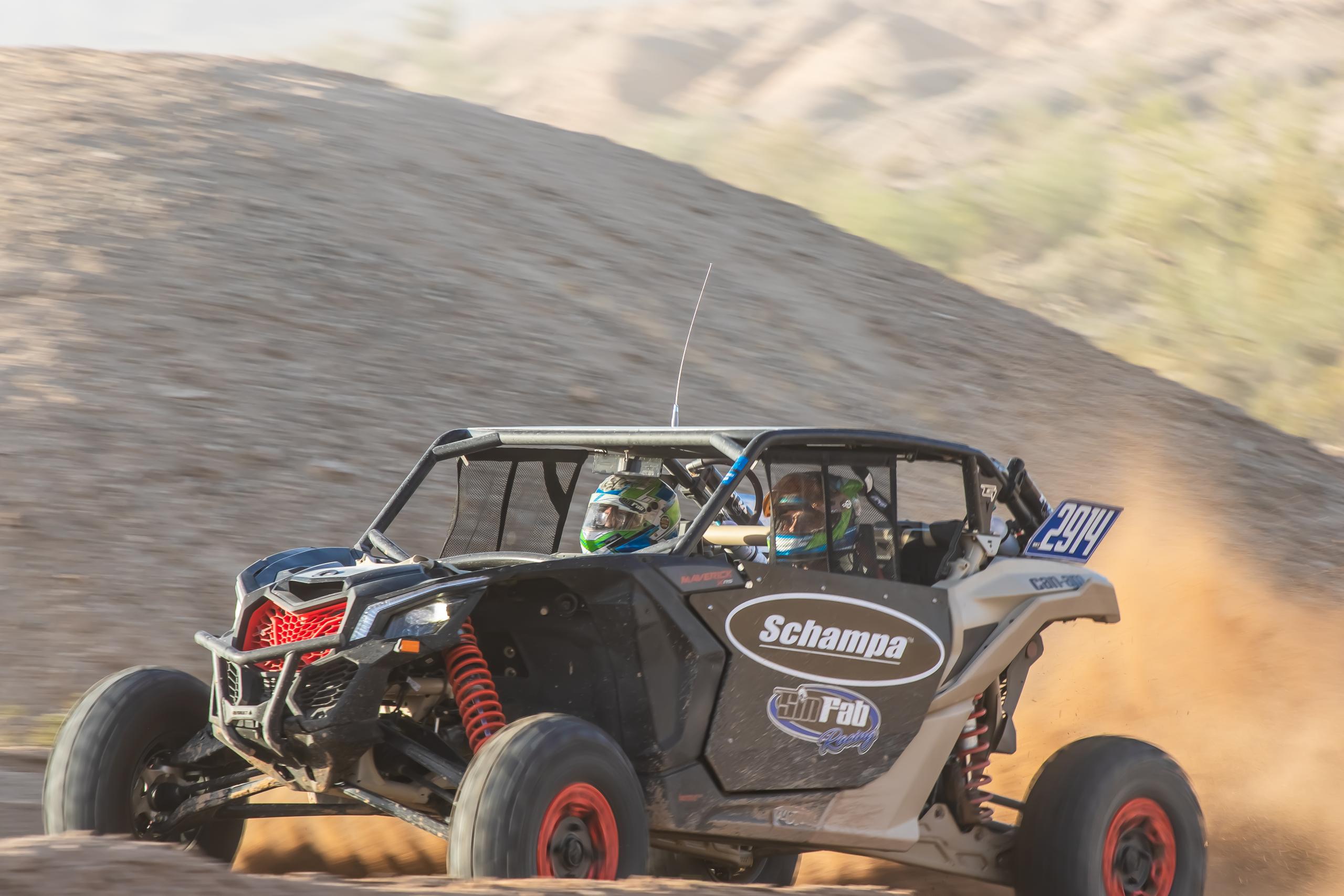 The UTV 170cc Advanced and Modified race was lined up after the Pee Wee bikes. As all 14 UTVs screamed around the infield, the top three battled for the top box. The podium winners finished 22 laps 6 seconds apart from either other. Cameron Leaming #1866 won the top spot over #147 Branden Krah, and 3rd place #186 Allison Furnell. Sunday’s race led to only one of the previous day’s top-three remaining on the podium. Kash Hart #130 raced his way to P1 while Allison Furnell earned 2nd, and #195 Tatum Forester came in 3rd. UTV 170cc/250cc Beginners were ready to take off after the Advanced class with 15 entries. Triton Lawrence #210 beat out his competition by 20 seconds coming in 1st. In 2nd place was #226 Reed Rather, and 3rd place Bentley Rainer. On Sunday Triton Lawrence increased the gap between himself and Rather by 23 seconds, placing 1st with a 43 second lead. Reed Rather came in 2nd again, and #186 Allison Furnell driving her 250cc Polaris placed 3rd.

The first of the big classes to the start line were the Big Bikes with a staggering 111 bikes. The moment signal came to start the bikes, there was the unforgettable rumble of dirt bikes, and the undeniable palpable tension in the air as racers were itching for the green flag. Big Bikes were the first to race the course in its entirety down through the canyon into the back wash and back up to the infield. As the last bike was off the line and left our line of sight, there was what seemed to be a deafening vail of silence that had fallen upon the start line. As hearing returned to normal the first bike was already flying over the table top and through scoring completing his first lap. Connor Maxwell #072 from Queen Creek, AZ kept near a minute lead over his closest competitor earning himself P1. Coming in 2nd, #89 Wyatt Cameron with a 7 second lead over 3rd place #93 Nolan Broaddus. Sunday brough a change up on the podium with #93 Nolan Broaddus from Phoenix, AZ placing 1st with over a minute and a half lead over 2nd place #415 Tate Vanvoorst and 3rd place #060 Eric Hallgath. 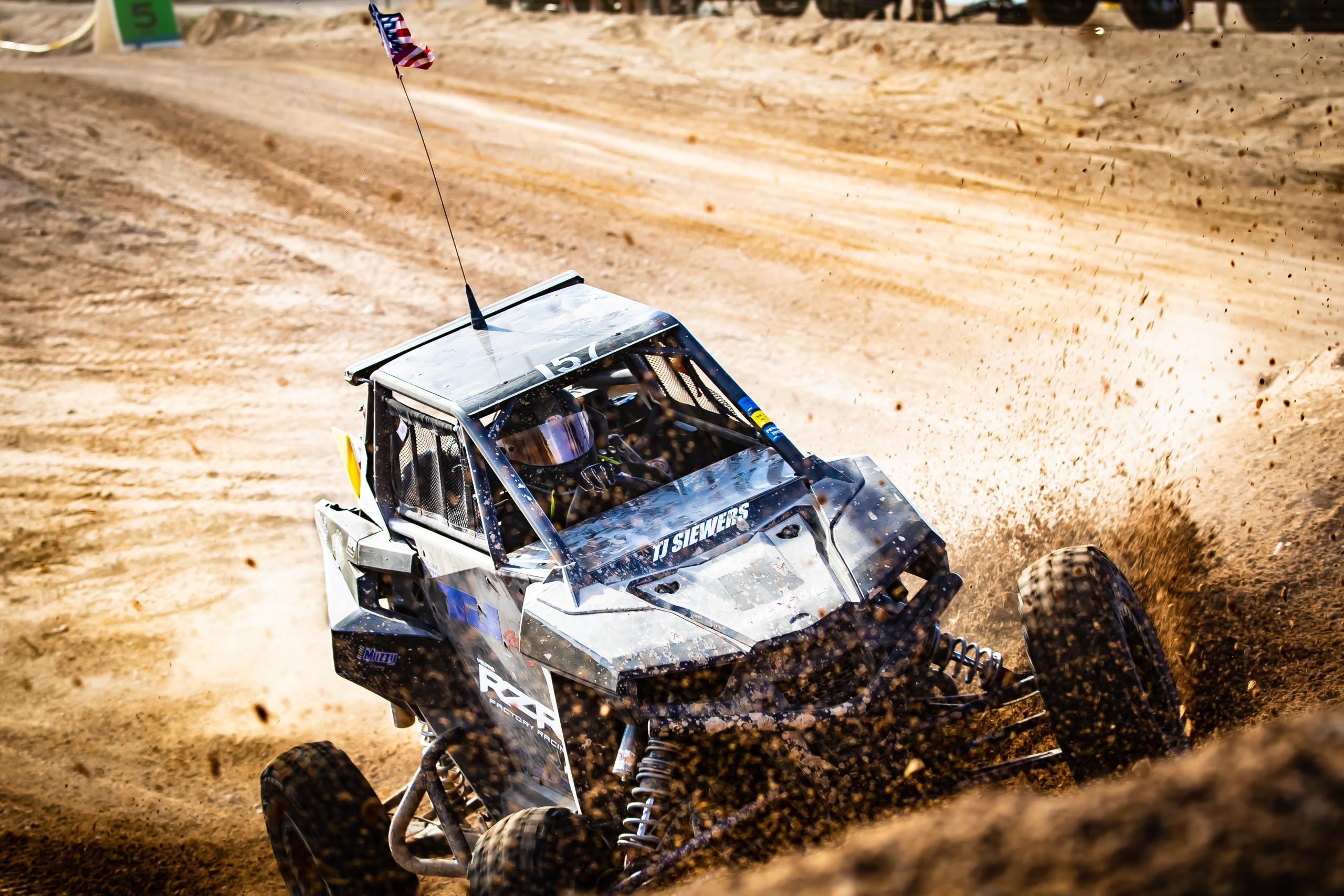 Mini Bikes and Pull Starts were up next in the heat of the afternoon. Battling for 1st was #74 Blake Gilbert and #213 Eddy Panuco both in 80-150cc B class. Gilbert took the lead and finished 16 second faster than Panuco. John Smallhouse #188 came in over a minute behind 1st for the 3rd position. On the Pull Starts, #1024 Jeff Lewis burned his competition coming in 1st with his 8-minute lead over 2nd place #805 Cody Peacock, and nearly 11-minute lead over 3rd place #30 Keaton Dunlap. On Sunday, Gilbert fell to 5th for #007 Tristan Andrade to take home 1st. Panuco and Smallhouse maintained their positions of 2nd and 3rd place, respectively. Pole positions for the Pull Starts saw notable changes from the previous day. John Horner #24 who only completed 2 laps on Saturday raced his way to 1st placed with a close to 4-minute lead. Another improvement from the previous day, #340 John Rudell, Wisconny Johnny, placed 2nd after having engine troubles at the start line Saturday. Lewis fell to 3rd 11 minutes behind 1st.

Following the Mini Bikes were the Mini Quad with 9 entries. Jake Marlatt #78 crossed the finish line 5 second ahead of #187 Jayden Llama, coming in 3rd was #666 Rachel Skaggs. On Sunday, Llamas dominated the field coming in 2 and half minutes before Marlatt, and #47 Ryder Nugent came in 3rd.

Big Quads and Trikes were up next. Veteran Pro Ron Suor #102 left the quads in his dust never letting off the throttle to finish 1st a full 1 minute 50 seconds over #27 Ian Sessions. Coming a minute later in 3rd was #65 Ian Kubik. Again, on Sunday Suor finished 1st over 2nd place Sessions, and 3rd place Kubik.

The UTV 570cc RS1 class were fired up ready for the green flag. This was a close fight from the green all the way to checkered between #147 Braden Krah, #566 Alexia Leaming, and #157 TJ Sewers all in the Youth 1000/RS1 class. Sewers came in 1st nine before 2nd place Krah and 3rd place Leaming. Sunday brought a close to minute faster race, and the same podium positions for the Sewers, Krah, and Leaming. 1st place TJ Sewers finished close to 45 second prior to Krah. 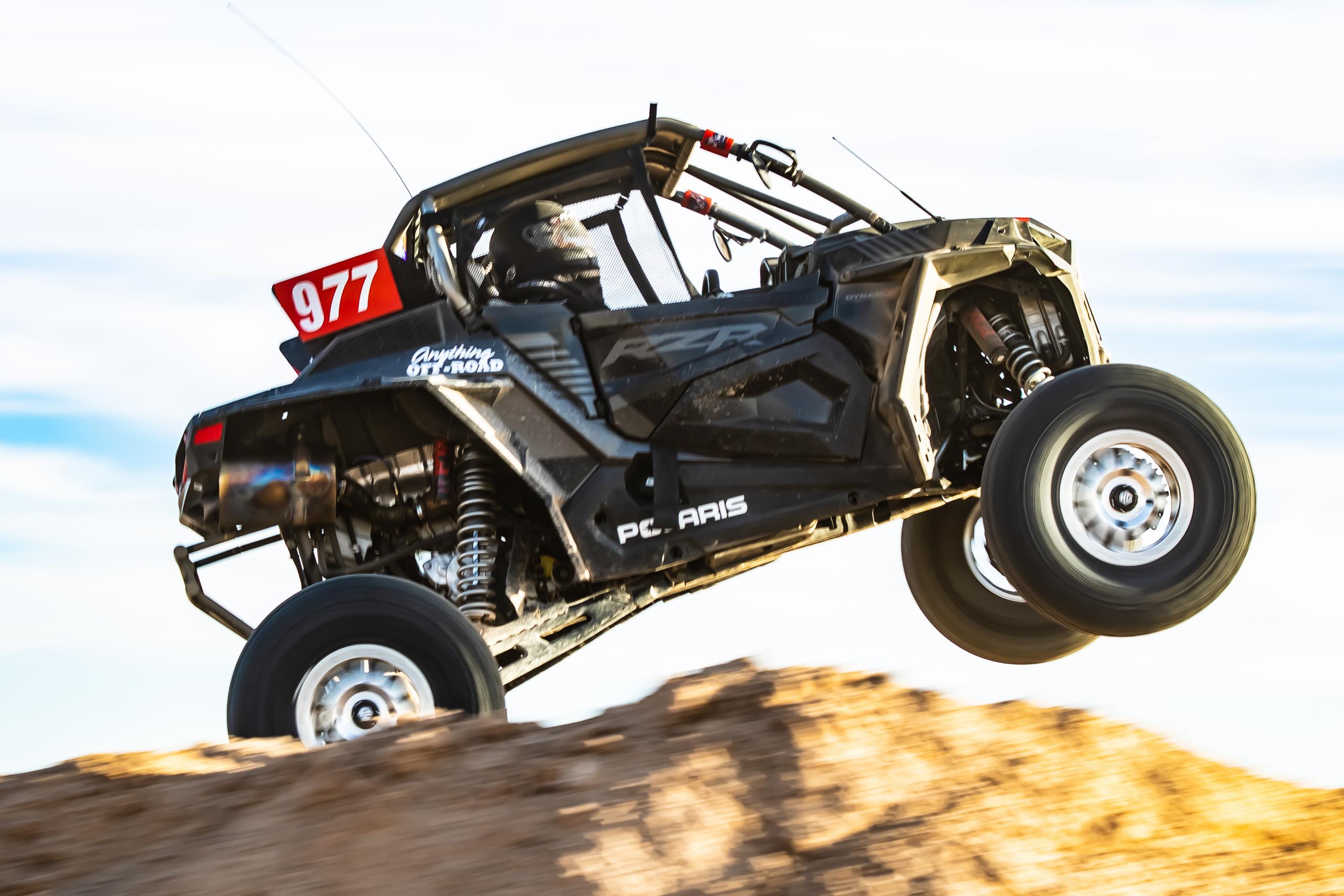 The finals races of Saturday and Sunday were the big UTVs. After preparing their UTVs all day in heat waiting for their time to take off, the drivers and co-drivers were anxious to get their show rolling. Polaris 1000cc Turbo driver, Shane Maxson #977 beat out 2nd place #2914 Dan Hurn, and 3rd place #199 Jaxson Steele. Robert Grime #995 greatly improved from Saturday’s P21 to the top box position. Grimes did not take any names on Sunday on his way to 1st finishing over a minute ahead of 2nd place Sessions, and a full lap lead over. #914 Barry Bennet.

As always, the AZOP Racing Rowley White RV Series would like to thank Arizona Color Vehicle, SinFab Racing, Rowley White RV, and all its sponsors, staff, volunteers, racers, and spectators for making this another great race weekend.  For complete race results and upcoming events visit www.azopracing.com.