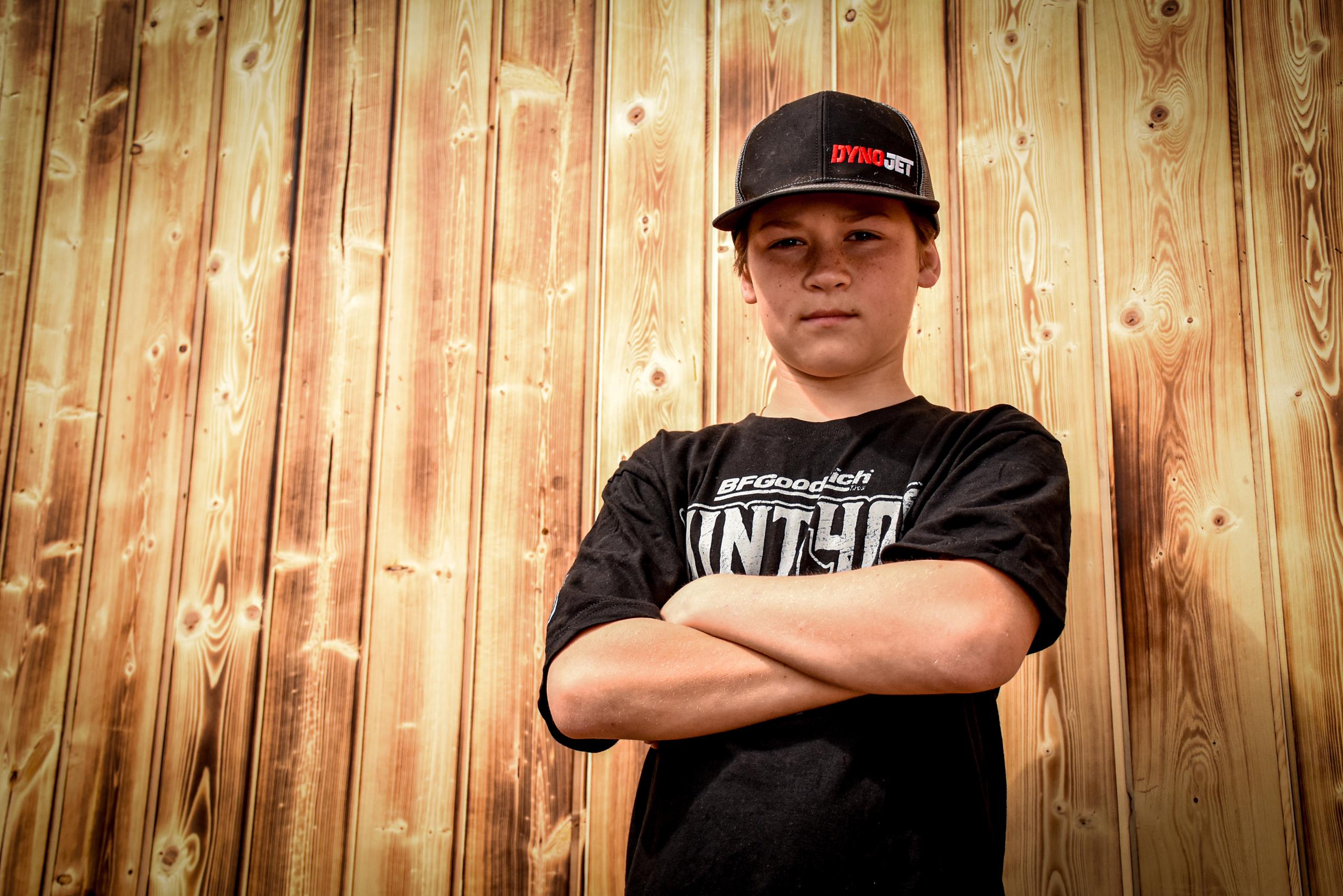 The future of off road is changing daily and drastically. With the tech and innovation driving us into the future at full throttle, it’s exciting to see the incredible forward progress of the sport. Then we have the racers themselves.  The ability to adapt with the fast moving technology has presented itself with its own challenges.

Meet Ruslan “Greasehandz” Yankilevich from Perris, CA. He’s an up and coming racer at 11 years old, but even at such a young age he’s not a stranger to the sport. In fact he’s been involved nearly his entire life. Ruslan’s father Arthur was an avid racer himself, having spent years racing in Oval Sprint cars and Junior dragsters.  Arthurs racing career came to a close after a terrible accident, and his mother laid down the law, and shut the racing down. Sometimes we just have to listen to our mother, they know best.

Fast forward to the mid 2000’s, Arthur and his young family very much enjoy the recreational dirt lifestyle. At age 5 Ruslan received his first vehicle, a 170cc quad. Like any 5 year old born into motorsports lifestyle, Ruslan was pretty stoked to start having some freedom on his new toy.  After a couple years, he realized he didn’t like the feeling of the 170 any longer and jumped up to a larger quad. He had his fun on the bigger quad, but it was again time to move forward.

At 8 years old Ruslan and his family decided to enter the race scene and had his first 570cc UTV built by Pinnacle Off road.  Right off the bat he realized he had a lot to learn. “I was racing a 570cc and all 170’s were beating me every race. I just wasn’t good at all” Ruslan explained. It didn’t discourage him at all, instead it taught him to learn to focus and work harder.  At the age of 9 years old, Ruslan decided to take on the Lucas Oil Series where he began to learn so much more about the sport. “I was getting better and better, but also became the champion of rolling! I just couldn’t ever save it!” Ruslan laughed while he explained that his sister is a gymnast, and together they were known as the “roller and the tumbler”, they even made comical youtube videos. But again, this never discouraged him.

At 9 years, Ruslan took on the UTV World Championship in his RZR 570, with only 2 months of desert racing experience. After a bit of miscommunication, he was supposed to race in the youth class, but somehow ended up in the adult 800cc class. He went on to complete the 16 mile loop, and his love for desert racing was born. He realized right away, his love for desert racing far exceeded his love for track. “Just finishing in open desert feels way better than taking first in track” Ruslan explained.  He understands it’s a completely different mental mindset, and the transition has been a good one.

Enter 2019, the “Canal Jump” heard around the world.  When “Ruslan Greasehandz” became known throughout the off road/motorsports social scene.  Some would say for good reasons, some would say for very stupid reasons. That’s for the fans and public to decide. Having been to the Imperial Sand Dunes, (otherwise known as the Glamis Sand dunes, located in Southern California), many times Ruslan began eyeballing the infamous canal, that only few have ever attempted, and even less have conquered.  As he approached the canal, he explained “it was much much bigger than I had thought” After some basic calculations, the 10 year old daredevil began backing up, signaled the thumbs up, stood on the throttle, and – SENT IT! Sent it like no other 10 year old has! After flying through the air almost approximately 100’, Ruslan landed, with just inches to spare. Inches away from complete disaster. Instantly solidifying himself as an off road legend, at the ripe age of 10.  The 10 year old daredevil even filmed, and edited the entire stunt on his GoPro, threw it up on Instagram, and the rest is history. Ruslan became an overnight sensation, being the first person on record to complete this stunt in a UTV, yes, at 10 years old. Other people/vehicles have achieved this in dirtbikes, quads, trucks, and sand rails, but this is the first UTV to reach the milestone. The stunt gained him exposure, fans, thousands of new followers daily, and notable sponsors.

All of this came at what “could” have been a VERY hefty price. The instant exposure gained the attention of the BLM (Bureau of Land Management),promptly reached out to Ruslan and his father, and even stopped by their home. The BLM discussed charges of child endangerment, and a $150,000 fine.

In an effort to reach a peaceful resolve, Ruslans family and the BLM agreed: If Ruslan filmed/posted a video, stating that his stunt was a very stupid one, and to discourage others from ever attempting it, that the BLM would not bring any charges, and drop the $150,000 fine.  There was a catch though, the video needed to get 14,000 views in under an hour. It did, and the legal issues went away. “The BLM seemed very easy to work with” Ruslan’s father explained. I asked Ruslan why he initially did the stunt? “ I have been told by so many people you need content, content, content, something wild for instagram. That’s how you build exposure”, he said.  He also explained, it was very stupid, very unsafe, and he would never do it again. “There’s no reason to”, he added. As you can imagine the Yankilevich was incredibly relieved, but the notoriety, popularity, and all around bad assery remain. Especially with a simple google search.

Ruslan is undoubtedly happy to move forward from the stunt, and continue growing his legacy. His first race since the stunt arrived. He entered and completed the 2020 Best in the Desert: Parker 250.  Ruslan then decided to go into battle, taking on “The Great American Off-Road Race” – The Mint 400, in Las Vegas Nevada. He originally entered the UTV RS1 class, but upon showing up to tech inspection, it was found his car was not equipped with a fuel cell, which that particular class requires. Other racers had called attention to this and protested. The decision to move Ruslan to the UTV Rally class was made.  Kilian Hamlin, an official with The Mint 400 confirms. Ruslan went on to complete all his required laps despite 8 flat tire changes, solo. It goes to show with determination comes success! This is a huge lesson for so many of us to learn.

So what’s next for Ruslan? He is currently in the works in building a custom UTV. He is working closely with off-road champion BJ Baldwin, whom he explained his close friendship with.  Baldwin has taken him under his wing, and Ruslan has become best friends with Baldwins son, Jaiden. The off-road mentorship is priceless.

Baldwin explains, “Ruslan is a unique kid in a sense that his wisdom is far beyond his age. He’s smart enough to listen to people that have already traveled down his chosen path of being a competitor in Motorsports. There’s more to it than winning races and he is aware of that from learning from myself, and others that have had success in that field. He can learn from the challenges and triumphs of his peers, and get an earlier start than we had. The main factor is that he has passion to be the best and that he will put in the work to do so. Whatever it takes. I saw that early in our friendship and that’s why he has my respect. If he continues his education and stays passionate, no one will be able to beat him. I hope he gets the opportunity to do so. It will be exciting for all of us.”

The details of the build need to remain underwraps at this point, but it is sure to be one incredible build.  A small hint: It’ll be a Pro UTV Turbo like no other has ever been built. Ruslan’s race goals are to remain mentally focused, and super mellow in his driving. “Every kid has the adrenaline to just go!” Ruslan explained.  He is also well aware, that’s not the best strategy. He’s learned this lesson more and more every race.

My personal opinion, Ruslan “Greasehandz” Yankilevich is the epitome of “The Future of off-road racing” He is one of those kids that just seems to get it.  He’s mentally prepared, talented, has the family support, and the determination to continue learning. Notable sponsors like: Assault Industries, Renegade Products, Dyno jet, Hoonigan, and Baja Designs have also taken notice, and hopped on board.  I asked if there is anything that you’d love us to know for the future, and after he explained a bit of the new build, he ended with “Oh, and i’ll be breaking a new world record this year too” After I asked for details, I was told to just STAY TUNED!