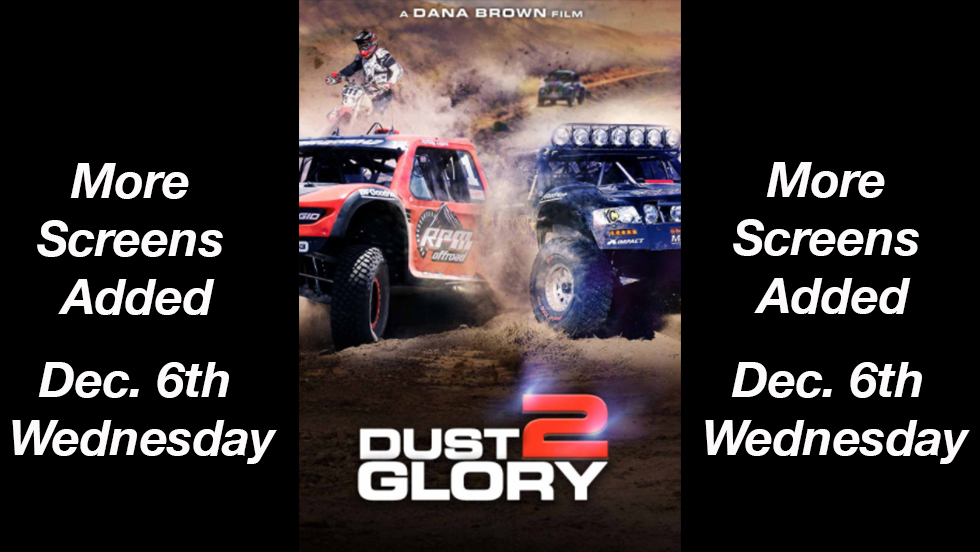 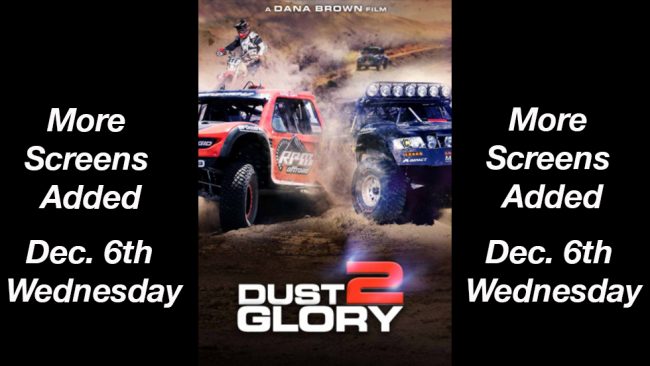 ENSENADA, Baja California, Mexico — With increasing ticket demand and over 70 screens already sold-out, cinemas across the country have added screens to accommodate the fans lining up for Wednesday’s special one-night premiere of Dana Brown’s long-awaited ‘Dust 2 Glory,’ the dynamic motorsports action documentary that was over 18 months in the making.‘Dust 2 Glory’ was produced by BCII in association with SCORE International, the World’s Foremost Desert Racing Organization, and Dana Brown Films. BCII’s Bud Brutsman is executive producer. The documentary showcases the SCORE World Desert Championship, desert racers who participate in this unique form of motorsports along with the warm, friendly and interesting people and the amazing, diverse and inspiring beauty of the unspoiled Baja California, Mexico peninsula.

MEETING DEMAND
With several private showings purchased by racers and sponsors from Anchorage, Alaska to Bristol, Va. to Honolulu, up and down the state of California from San Diego to Walnut Creek and others filled by fans from all over the country, nearly 70 of the theaters with sold-out showings have added additional screens to help meet the demand for this unique premiere.

D2G IN BAJA
Filmed entirely in Mexico’s mysterious Baja California peninsula, ‘Dust 2 Glory’ has chronicled each of the four races in the 2016 SCORE World Desert Championship as well as the 2015 SCORE Baja 1000. In addition to both the 2015 and 2016 SCORE Baja 1000 races, footage for the film also came from the other 2016 SCORE Baja races—the 30th SCORE San Felipe 250, the 48th SCORE Baja 500 in Ensenada and the Rosarito Beach 20th SCORE Desert Challenge.

VERY SPECIAL SHOWINGS
While as many as 70 of the original ‘sold-out’ theaters have added an additional screen to help meet the demand for this premiere, several of the locations are being used for special ‘Premiere Night’ parties to help salute the ‘Dust 2 Glory’ celebration. SCORE owners Roger and Elise Norman will be headlining the very special showings by hosting several key Mexican dignitaries along with a few of the key SCORE staff members at the AMC Mission Valley 20 in San Diego. Among the Mexican guests expected to join the festivities in Mission Valley are Baja California Governor Francisco Vega De La Madrid, Baja California Secretary of Tourism Oscar Escobedo, Tijuana Mayor Juan Manuel Gastelum, Ensenada Mayor Marco Novelo, Mexicali Mayor Gustavo Sanchez, Tijuana Tourism Committee President Francisco Villegas, Proturismo of Ensenada President Nico Saad as well as representatives from the Mexican Military and Navy. Also at the Mission Valley location will be SCORE Advisor Juan Tintos Funcke as well as SCORE Race Director Jose A. Grijalva.
Filmmaker Dana Brown is hosting an industry ‘Premiere Night’ party at the Arlington in Santa Barbara, Calif. and the film’s Executive Producer Bud Brutsman, CEO of BCII TV in Los Angeles, will be hosting another gathering at the Edwards Calabasas Stadium 6 complex in Calabasas, Calif. Among those joining Brown in Santa Barbara will be his father, legendary film producer Bruce Brown and also in Calabasas will be iconic racing figure Sal Fish, who owned SCORE for 38 years before selling to the Normans in late 2012. Jim Ryan, SCORE Director of Sales and Marketing will be attending the ‘Premiere Night’ party in Indianapolis hosted by SCORE racer Robbie Pierce and his MasterCraft Safety/Impact Company during the Performance Racing Industry trade show being held this week at the Indiana Convention Center in Indy. Also at the Indy showing will be Greg Glass, President of BCII TV. In Reno, Nev., legendary SCORE racer Rod Hall, the only person who has raced in all 50 SCORE Baja 1000 races and has a race-record 25 class wins, will be hosting another ‘Premiere Night’ gathering with his sons Josh and Chad at the Century Summit Sierra theater. Joining them at this party will include SCORE Reno office staffers Audreonna Cruz, SCORE Racer Registration and Membership Director, SCORE Administrator Mandy Dunn and Michello Ou, SCORE registration and bookkeeping assistant. With racers having groups at theaters across the country, SCORE long-time Media Operations Director Dominic Clark will be attending the premiere at the Regal Green Valley Ranch Stadium 10 in Las Vegas. Among the other sold out premieres where an additional screen has been added are theaters in La Jolla, Calif., Long Beach, Calif., Santa Barbara, Calif., El Cajon, Calif., Temecula, Calif., Ft. Wayne, Indiana, Las Vegas, Rochester Hills, Mich., Greenville, S.C., Grapevine, Texas, Grand Junction, Colo., St. George, Utah, West Des Moines, Iowa, Bristol, Va., Anchorage, Alaska and Honolulu.

DUSTY TRAIL
‘Dust 2 Glory,’ which began filming at the 2015 SCORE Baja 1000, continued up close and personal coverage capturing the robust racers in their amazing adventures in Mexico’s majestic Baja California peninsula through all four spectacular races on the 2016 SCORE World Desert Championship schedule. Two years of the iconic SCORE Baja 1000 are part of this adrenalin-filled motorsports documentary.
The documentary captures the spirit of SCORE Baja racing through many of the courageous competitors all on the colorful backdrop of Mexico’s magnificent, majestic Baja California peninsula.

SCORE COMMENTS
“People all over the U.S. are lining up for tickets for the premiere and SCORE is extremely enthusiastic regarding the release of this epic production chronicling the daring exploits of the courageous competitors amidst the background of Mexico’s stirring Baja California peninsula,” commented Roger Norman, SCORE CEO/president who himself is a former overall winner of the legendary SCORE Baja 1000. “‘Dust 2 Glory’ tells the complete story of the SCORE World Desert Championship. Dana Brown and Bud Brutsman have weaved together a tantalizing tapestry of the intense racing, committed families, extraordinary race vehicles and the wonderful people of Baja.” “The movie showcases what the SCORE World Desert Championship is all about, unlike any other form of racing in the world. Audiences will be stunned, exhilarated, literally left speechless and most of all–delightfully entertained.” For more information regarding SCORE, visit the official website of the SCORE World Desert Championship at www.SCOREInternational.com.