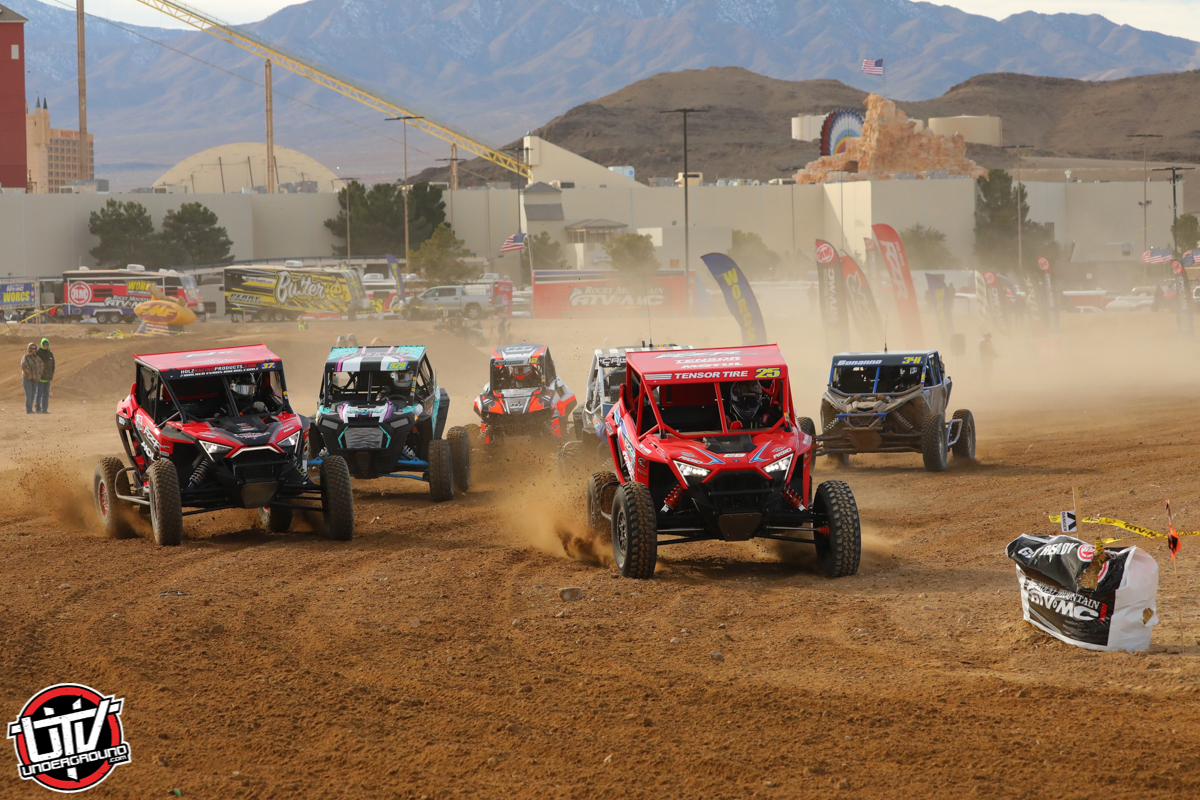 2019 SXS Pro Stock Champion Corbin Leaverton stepped up to the SXS Pro Production turbo class for this season and didn’t appear to miss a step as he won the season opener for the ATV MC WORCS Series presented by Polaris RZR race at Buffalo Bill’s Resort and Casino. Leaverton won on adjusted time, ahead of David Haagsma and Sierra Romo, making for a Polaris sweep of the podium. Cody Miller finished fourth in a Can-Am Maverick X3, ahead of Larry Heidler in a Polaris. Haagsma won the SXS Pro Stock race.

The event was held at the combined off-road and short course track that has traditionally started out the WORCS season. The track stayed consistently damp early in the weekend but began to dry out as the races ran and it turned rough and rutted for the SXS Pro Production headliner.

It marked Leaverton’s first victory in his first-ever start in the class. In addition, it also marked a Polaris counterpunch on Can-Am, which dominated the 2019 campaign. Indeed RZRs swept the podium, with Leaverton and Haagsma in its new race-bred RZR XP Pro, and Romo in a Turbo S.

Owing to his first year in the class, Leaverton started on the third row and had a strong holeshot. From there, he used his new Polaris XP Pro’s horsepower to his advantage and made it quickly to the front. Though he finished physically behind Haagsma, adjusted time put him just ahead for the victory.

“I can’t say enough about this new Polaris XP Pro,” said Leaverton. “It yanked right out of the start. I never looked back from there. I gave it everything I had on that last lap and I’m so pumped to come out with a win in my first Pro Turbo race.”

Leaverton admitted he has never been a fan of the Primm track and he hasn’t had much luck here. In addition, Haagsma lives nearby and has virtually owned the competition on this track during the last few years.

“This has been one of my least favorite tracks, but I loved the layout today,” said Leaverton. “It was skinny but there were a lot of lines to take. I just pieced them together and everything went my way today.”

Though Haagsma finished second, taking into consideration the misery he experienced last season, he was happy to start out 2020 with a podium. He credited Polaris’ new RZR XP Pro with bringing a suitable contender in the new car.

“It was a really close race but I’m happy to start off the year with a podium,” said Haagsma. “The Polaris ran great and the only one that beat me was another one. Polaris did a great job with the car and Holz did a great job building it. I was hoping for a clean sweep but I lost it by just a little bit.”

Romo brought her new car out just to have a fun weekend. Outfitted with Toyo tires, the first Pro competitor to run them, she left Primm with a podium. Though a prominent name in other racing disciplines, Toyo has chosen the Romo family’s team to make inroads into the growing sport of SXS racing.

“I brought out my new Polaris Turbo S and this car is amazing out of the box,” said Romo. “I felt so comfortable. I feel a huge amount of confidence in the new Toyo tires. We’re the first SXS team to run the Toyos. They are a game changer and I hope people see what we can do with them and make the switch.”

In Pro Stock, Ronnie Anderson took the holeshot in his Polaris RZR RS1 just ahead of Haagsma. The pair battled throughout the one-hour race before Anderson fell out with a mechanical issue on the third lap. From there Haagsma ran away with the race. Chris Johnson was second, followed by Matt Hancock. Beau Baron and Shelby Anderson rounded out the top five. All were driving Polaris RZR RS1s.

Haagsma had a nightmare season in 2019 but began to gain momentum late in the year shortly after deciding to race in Pro Stock. That momentum led to a hopeful end to that nightmare and a return to the consistency to which he’s accustomed. He’s competing for the championship in both classes this year.

“This is my first win in over a year,” explained Haagsma. “We had a rough go last year and this is already looking better. It’s a great start and we just have to keep it together. We have a really good start to the year.”

Johnson started on the front row and made it up to fourth three turns into the race just behind Shelby Anderson. They battled for the for several laps before Johnson took the spot and set sail for second. Anderson fell back after flipping her car on the front stretch.

“I was on the first row thank God because last year was a struggle,” said Johnson. “Honestly, I knew it was a long time coming I just had to put it together. I played cat and mouse with Shelby Anderson and I made some small mistakes, but it worked out. My biggest problem last year were big mistakes. I’m a bike guy so I’m still figuring it out.”

Hancock was asleep at the green flag and started dead last on his row. Once he got going, though, he was fast, and he quickly began passing cars. He inherited third when Shelby Anderson crashed and held the final podium spot from there.

“I started passing people when I could,” said Anderson. “At the end, Shelby had an issue and went over, so I got past her. It’s going to be a really long year, so every point matters. We’ll move on and go to the next race.”

The WORCS SXS classes next head to Honolulu Hills Raceway in Taft, CA for round two. That race is scheduled for February 28-March 1.