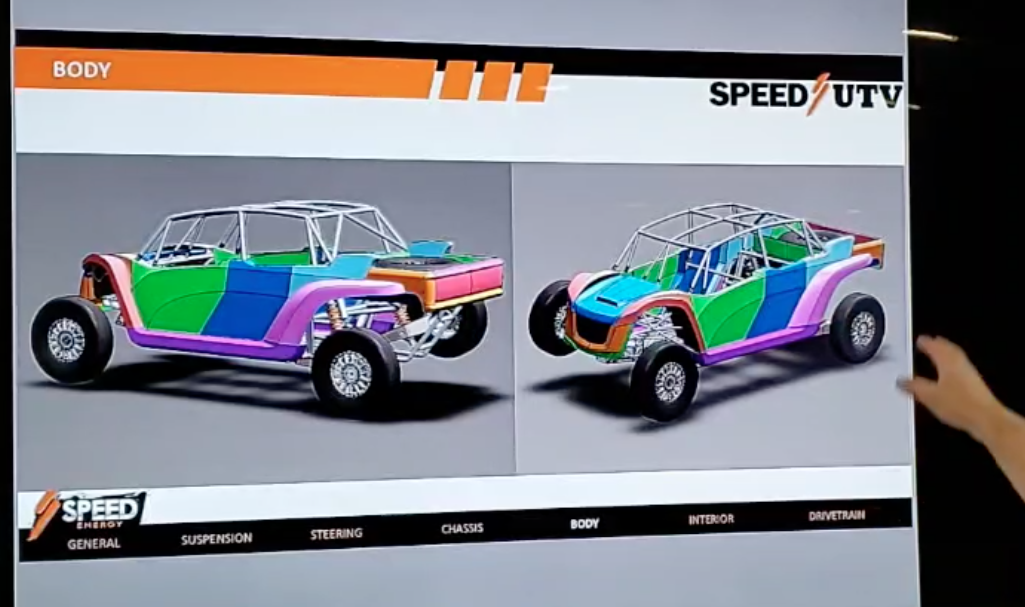 Another week another live stream from the Speed UTV factory. This week Robby Gordon covered the body details quite extensively and answered a number of social media questions, so if you’ve got questions, get a hold of Speed UTV on their Facebook and Instagram, and ask away!

We did find out that they’re still optimizing the overall look and feel of the car, but the final look and feel will be finalized by the end of April. Here’s where we’re at currently.

All three variations of the Speed UTV will be basically the same, the only part of the car that will change will be after the front seats and right before the gas tank. That’s where they’ll take out or add length between the 95″, 110″ and 120″ wheelbase models.

The overall lengths for all three cars are as follows:

Some more tweaks are expected over the coming weeks, especially to the tail gate, Robby mentioned “it’s not quite there yet”. Below is an artist’s rendering of the look and feel they’re going for with the tail gate.

With 48 inches in width, and 35 inches in length, we’re also looking at the biggest bed in the industry. You’ll be able to fit a spare tire in the back, along with a cooler, and maintain a low center of gravity. Robby teased that the UTT, or the enclosed Speed UTV that’s bound to be released next summer will have a 50″ bed with the tail gate down, so you’ll be able to carry a plywood turning this ultimate weekend warrior into a work horse on the ranch.

It’s not a mirage, you’re seeing that right. The 2021 Speed UTV will have 3 fans, and the radiator will be 30% bigger than what they’ve used in the Wildcat XX, so keeping the massive engine cool will not be a problem.

Robby mentioned that in the closed cab model, the radiator will be moved up front, while on the open cab model the radiator will sit in the back of the car and the fans will point up, forcing all that hot air to exit out the number plates.

We got a sneak peak of the interior, the most interesting part besides the 10″ dash screen is the square steering wheel. Already a standard option of the high end race cars, Robby mentioned that this is the direction they want to go in so that you’ll be able to get that much visibility of the all the ever important technical data on the screen.

Behind that square steering wheel you’ll be able to mirror your smart phone, so all those maps, race tracking apps will be front and center. With the amount of technical data, I think it’s safe to assume that you’ll be able to customized what information you see.

Robby confirmed the intake will face the front of the car, along with the alternator keeping both as far away from the dirt and mud as possible, while the exhaust and turbo will all face the back of the car. The engine is a dry sump design, don’t worry about having to dislocate the right side of your body to remove the oil filter, it will be easily accessible.

Robby also showed us the tuned exhaust ports which will face straight out the back of the engine, which improves the power band, optimizes the flow and gets rid of hot spots. It was also mentioned that the car would have a MagnaFlow catalytic converter and a Bosch ECU.

Although running 91 octane is suggested to get the maximum performance of the motor, it may not always be accessible especially when racing south of the border, that’s also being addressed with sensors that detect lower octane fuel and knock down timing to prevent knock.

Although we heard quite a bit of news about the suspension in the 2021 Speed UTV, we can always happy to find out more.

Parts for the shocks will be available as soon as the 2021 Speed UTV is on market. The most interesting aspect of the shock design is that it doesn’t use a shim stack like a lot of cars out there use today, it’s a design Robby has been using for the last 25 years and he swears by it.

The bulkhead in the 2021 Speed UTV is a similar design that Robby uses in his trophy truck. Everything on the front end will tie into it. The steering, front diff, anti roll bar, pivot points. It’s much stronger than a steel chassis, it’s easy to replace and keeps all the geometry true in case you have to replace it, it’s an easy swap.

Robby also showed us the wheel options that will be available for the Speed UTV, keep in mind, only the first 500 cars come with beadlock wheels, however if that’s something you really want, you’ll be able to purchase those from Speed UTV.

Robby teased that next week at 7PM EST we will find out more about the drivetrain on the car.